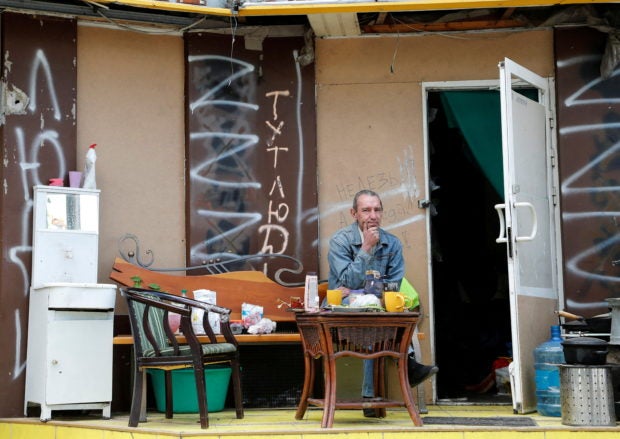 A local resident sits outside a building damaged during Ukraine-Russia conflict in the southern port city of Mariupol, Ukraine April 28, 2022. REUTERS

Around 100 evacuated from steel plant

An initial group of around 100 civilians have been evacuated from the besieged Azovstal steel plant in the southern port city of Mariupol, Ukrainian President Volodymyr Zelensky says.

Moscow says some civilians were handed over to the UN and the Red Cross.

“I suffer and weep, thinking of the sufferings of the Ukrainian people, and in particular, the weakest, the elderly and children,” he adds.

US Speaker of the House Nancy Pelosi has urged Ukraine not to back down in the face of “bullies” like Russia following a surprise weekend visit to Kyiv.

“Do not be bullied by bullies. If they are making threats, you cannot back down. That’s my view of it,” she tells journalists in the Polish city of Rzeszow, a day after talks in the Ukrainian capital with President Zelensky.

The EU will propose a phased-out ban on Russian oil imports as part of its fresh round of sanctions against Russia for its invasion of Ukraine, sources say.

The European Commission, which draws up sanctions for the EU’s 27 countries, is currently preparing the text, which could be put to the member states as early as Wednesday, diplomats say.

German Chancellor Olaf Scholz has defended his decisions on Ukraine, rejecting criticism he failed to take rapid action or do enough to provide desperately sought armaments to Ukraine.

A fire has broken out at a Russian defence ministry site in Belgorod, close to the border with Ukraine, the region’s governor says, slightly injuring one person.

Denmark and Sweden are summoning Russia’s ambassadors after a Russian spyplane violated the air space of both countries, their governments say.

Officials said the plane entered Danish airspace on Friday evening east of the Danish Baltic island of Bornholm before flying into Swedish airspace.

Moscow suggests it could seize the Russia-based assets of countries it deems hostile in retaliation for a US proposal to sell off Russian oligarchs’ assets and pay the proceeds to Ukraine.

Spanish tennis star Rafael Nadal describes Wimbledon’s decision to ban Russian and Belarusian players from taking part in the Championships as “unfair”, arguing that the war is not their fault.