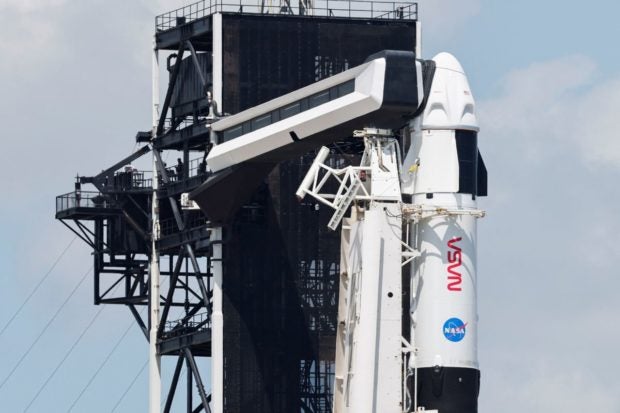 A SpaceX Falcon 9 rocket is prepared for launch with a crew of four astronauts to begin a six-month expedition on the International Space Station, at Cape Canaveral, Florida, U.S. April 26, 2022. REUTERS

CAPE CANAVERAL, Florida — Elon Musk’s rocket company SpaceX was due to launch the next long-duration astronaut crew to the International Space Station (ISS) for Nasa early on Wednesday, including a medical doctor turned spacewalker and a geologist specializing in Martian landslides.

The SpaceX launch vehicle, consisting of a two-stage Falcon 9 rocket topped with a Crew Dragon capsule dubbed Freedom, was set for liftoff with its four-member crew at 3:52 a.m. EDT (0752 GMT) from Nasa’s Kennedy Space Center in Cape Canaveral, Florida.

If all goes according to plan, the three U.S. astronauts and their European Space Agency (ESA) crewmate from Italy will reach the space station about 17 hours later to begin a six-month science mission orbiting some 250 miles (420 km) above Earth.

During a pre-launch briefing on Tuesday, Nasa officials said forecasts called for a 90% chance of favorable weather conditions for an on-time lift-off.

“Flying safely with crew means that you’ve got to do it one step at a time,” Kathryn Lueders, associate Nasa administrator for space operations, told reporters. “We’re hoping that you’ll get to see a really, really beautiful step, and we’ll get our crew safely to orbit.”

The latest mission, designated Crew 4, would mark the fourth full-fledged ISS crew Nasa has sent to orbit aboard a SpaceX vehicle since the private rocket venture founded by Musk, also owner of electric carmaker Tesla Inc (TSLA.O), began flying U.S. space agency astronauts in 2020. In all, SpaceX has launched six previous human spaceflights over the past two years.

Assigned as Crew 4 commander is Dr. Kjell Lindgren, 49, a board-certified emergency medicine physician and one-time flight surgeon making his second trip to the ISS, where he logged 141 days in orbit in 2015.

During that expedition, he performed two spacewalks and participated in more than 100 science projects, including the “Veggie” lettuce experiment that marked the first time a U.S. crew member ate a crop grown in orbit.

The designated pilot for mission is rookie astronaut Bob Hines, 47, a U.S Air Force fighter pilot, test pilot and aviation instructor who has accumulated more than 3,500 hours of flight time in 50 types of aircraft and has flown 76 combat missions.

Another crew member making her debut spaceflight as mission specialist is Jessica Watkins, 33, a geologist who earned her doctorate studying the processes behind large landslides on Mars and Earth and went on to join the science team for the Mars rover Curiosity at Nasa’s Jet Propulsion Laboratory.

The Crew 4 flight will make Watkins the first African American woman to join a long-duration mission aboard the International Space Station. She follows in the footsteps of only seven other Black astronauts to have boarded ISS since its inception more than two decades ago.

Rounding out Crew 4 is Samantha Cristoforetti, 45, an ESA astronaut and Italian Air Force jet pilot making her second flight to the space station and slated to assume command of ISS operations during the team’s six-month stint, becoming Europe’s first woman placed in that role.

Cristoforetti and Watkins previously served together as aquanauts in the Aquarius underwater habitat of the Nasa Extreme Environment Mission Operations (NEEMO) mission in 2019.

The Crew 4 team will be welcomed aboard by seven existing ISS occupants, the four Crew 3 members they will be replacing – three American astronauts and a German ESA crewmate due to end their mission in early May – and three Russian cosmonauts.

The launch comes less than two days after a separate four-man team organized by Houston-based company Axiom Space returned from a two-week mission as the ISS’s first all-private astronaut crew, splashing down on Monday in a different SpaceX capsule.

SpaceX satellite internet in PH up in 3 months