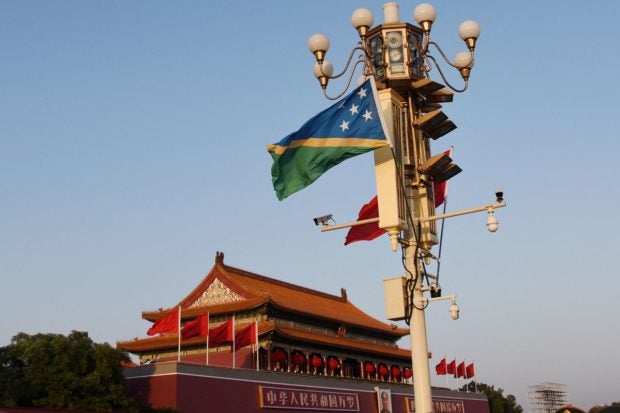 Andrew Shearer, the director-general of the Office of National Intelligence, travelled to the Pacific islands nation last month in a failed attempt to persuade Prime Minister Manasseh Sogavare not to sign a security pact with China that has alarmed the United States and its allies.

While details of the pact have not been disclosed, Sogavare has ruled out a military base and said it covers domestic policing.

Shearer told the Raisina Dialogue conference in New Delhi that Australia responded within eight hours to Sogavare’s request in November for police assistance to quell riots.

Deployed Australian police sit under the command of the Royal Solomon Islands Police Force through a bilateral security treaty.

Australia is concerned about the impact of Chinese police on unity of command in security operations, he said.

“In such a fragile, volatile country Chinese policing techniques and tactics that we’ve seen deployed so ruthlessly in Hong Kong, for example, are completely inconsistent with the Pacific way of resolving issues and could incite further instability and violence in the Solomon Islands,” he said.

The Chinese embassy in the Solomon Islands did not immediately respond to a request for comment. China said previously the security deal was not targeted at any third party and did not contradict the cooperation the Pacific nation has with other countries.

The pact has dominated the Australian election campaign, amid fears it could lead to a Chinese navy presence less than 2,000km (1,200 miles) from Australia.

On Wednesday, Home Affairs Minister Karen Andrews told radio station 4BC it was “very likely” China would send troops to Solomons, and said the timing of the pact announcement was a form of political interference in the Australian election.

Shearer denied the signing of the pact was an intelligence failure by Australia, which has invested billions of dollars in aid and security assistance to the Solomon islands.

Intelligence agencies were concerned it could potentially lead to an increased Chinese military presence, despite Sogavare publicly ruling this out, he said.

China aimed to establish a network of dual use and military facilities from the west coast of Africa to the Pacific, he said.

U.S. vows stepped up Indo-Pacific effort in push back against China