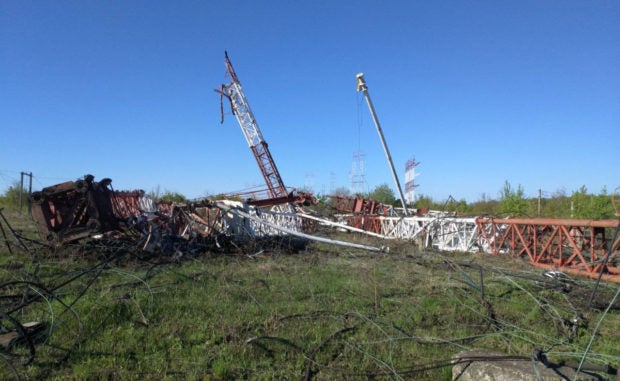 This handout picture released on April 26, 2022 by the Transnistrian Interior Ministry shows antennas of the “Mayak” radio centre lying on the ground following the blasts in the village of Mayak in Grigoriopolsky district in Moldova’s Russian-backed breakaway Transnistria region. AFP

PARIS — Fears that the tiny former Soviet republic of Moldova could be sucked into the conflict in neighboring Ukraine are mounting following several explosions in the breakaway Moscow-backed region of Transnistria.

The mysterious blasts which targeted the state security ministry, a radio tower and military unit come days after a senior Russian commander claimed Russian speakers in Moldova were being oppressed — the same argument used by Russia to justify its invasion of Ukraine.

Rustam Minnekayev, the deputy commander of Russia’s central military district, said that gaining control over southern Ukraine would help Russia link up with Transnistria, which lies just across the border from the Black Sea port of Odessa.

Here are five things to know about Transnistria:

The predominantly Russian-speaking region wedged between the Dniester river and the Ukraine border seceded from Moldova following the collapse of the Soviet Union.

In 1992, the separatists fought a war with Moldova’s pro-Western government, which ended in hundreds of deaths and the intervention of the Russian army on the rebels’ side.

In a 2006 referendum that was not recognised by the international community, 97.1 percent of voters backed joining Russia, dealing a blow to Moldova’s hopes of following Romania and other ex-communist eastern European states into the EU.

Moldova’s current president Maia Sandu has made clear her opposition to Transnistria’s secession.

She wants Russian troops stationed along Transnistria’s frontier with Moldova to be replaced with an observer mission from the Organization for Security and Cooperation in Europe, a proposal rejected by Moscow.

Transnistria still uses the Cyrillic alphabet and has its own currency (the Transnistrian ruble), security forces and passport, although most of its estimated 465,000 residents have dual or triple Moldovan, Russian or Ukrainian nationality.

The majority of the population is Russian-speaking, while the rest of Moldova is dominated by Romanian speakers.

Moscow props up Transnistria’s economy, supplying free gas and keeping 1,500 troops stationed there, effectively creating a Russian satellite on the borders of the EU.

Transnistria has long been seen as a smugglers’ haven, with the Black Sea port of Odessa, across the border in Ukraine, acting as a prime gateway for contraband cigarettes, alcohol and other merchandise.

The Sheriff group, a huge holding founded by two former Soviet police officers, has a stranglehold on the territory, where it owns supermarkets, gas stations, a cognac distillery and a beluga caviar farm.

In 2015, the RISE Moldova investigative news group reported that a third of Transnistria’s budget wound up in Sheriff’s coffers.

The Sheriff group also owns FC Sheriff, the upstarts in this year’s Champions League, who caused one of the biggest upsets in the history of the competition when they beat Real Madrid 2-1 in a home game in Madrid’s Santiago Bernabeu stadium in September.

Transnistria is awash with Soviet symbols.

Its flag is emblazoned with a hammer and sickle, a huge statue of Lenin looms over the center of its main city Tiraspol and a bust of the Bolshevik leader sits outside the town hall, or House of Soviets.