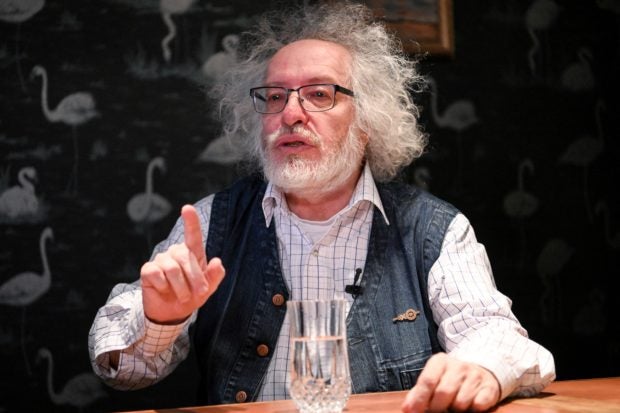 MOSCOW—It survived for decades as one of Russia’s leading independent voices, but when radio station Echo of Moscow shut down last month, long-time editor Alexei Venediktov knew it was the end of an era.

“The country has been thrown back in every sense, for me it’s been set back 40 years,” said Venediktov, who joined the station at its founding in 1990 and steered it through the 20 years of Vladimir Putin’s rule, until the Russian president sent troops into Ukraine two months ago.

“We are now somewhere around 1983… war is going on in Afghanistan, dissidents are in jail or kicked out of the country and Andropov is in the Kremlin,” he said, referring to Soviet leader Yuri Andropov, who like Putin served in the KGB.

With his mop of curly grey hair, 66-year-old Venediktov has been a top figure of Russia’s media scene for years, leading the flagship of liberal broadcasters.

Echo of Moscow first took to the airwaves in August 1990, in the final months of the Soviet Union, becoming a symbol of Russia’s new-found media freedoms.

Venediktov, a former history teacher, joined the station as a reporter and became editor-in-chief in 1998.

As pressure mounted on Russian media over the last 20 years and many other independent outlets fell under state control, Echo of Moscow survived — a fact many chalked up to Venediktov’s links with powerful officials, including in the Kremlin.

He made no secret of having friends in high places, referring to them jokingly as his “drinking buddies”, and was one of the few journalists in Russia who continued to openly criticise Putin.

The Kremlin chief even intervened when zealous officials wanted to shut the station down, Venediktov told AFP during an interview in a central Moscow restaurant.

But that changed when Russia launched the military offensive in Ukraine on February 24 and Echo of Moscow described the campaign as a “political mistake”.

Echo of Moscow was taken off the air on March 1, and then formally shut down by its board of directors, where the majority of votes were controlled by state energy giant Gazprom.

The station’s frequencies in Moscow and several other cities were taken over by state-owned Sputnik Radio.

“I understand (Putin’s) logic: he could not keep us because propaganda during such operations must be total,” Venediktov said.

Russia in March also introduced prison terms of up to 15 years for publishing information about the army deemed false by the government and in late April Venediktov was designated a “foreign agent”.

Last month, he posted images online of a pig’s head wearing a curly wig that was left outside his apartment and an anti-Semitic sticker glued to his door.

Many journalists have fled Russia fearing for their safety, but Venediktov said he has no plans to leave.

“People will trust me more if I experience the same difficulties, walk the same streets as them and face the same sanctions,” he said.

Venediktov now hosts guests on a YouTube channel that has racked up half a million subscribers.

He wants to continue speaking about the Ukraine conflict, saying Russians need to know “why this happened” and “why you are hurting”.

Venediktov said he had met Putin several times over the years, but “we never spoke the same language”, with the Russian leader believing “the media is an instrument” of the state.

“I told him face-to-face that the main problem in the country was the absence of any form of competition: political, ideological and economic absolutism,” Venediktov said.

Despite their differences, he said Putin had twice asked the former teacher what place he would occupy in history books — once in 2008 at the end of his first two presidential terms, and again in 2014 after the annexation of Crimea.

Even with the dramatic events of the last few weeks, Venediktov said he is not sure.

“We are still in the middle of the chapter and we can’t turn the page yet.”