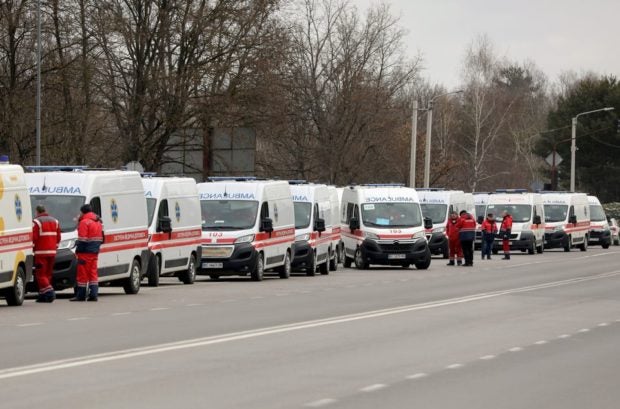 Ambulance vehicles are lined up near a hospital, amid Russia’s invasion of Ukraine, in Novoyavorivsk, Ukraine, March 13, 2022. REUTERS

LONDON — Britain is providing Ukraine with new ambulances, fire engines, medical supplies and funding for health experts to help its emergency services deal with the aftermath of Russian attacks, the government said on Monday.

The latest batch of British support will see 22 new ambulances leave for Ukraine in the coming days to join more than 40 fire engines carrying rescue equipment, thermal imaging cameras and almost 10,000 items of protective clothing which have already been dispatched there.

The British government is also giving 300,000 pounds ($382,000) to the medical aid charity, UK-Med, to help it train Ukrainian doctors and nurses to deal with mass casualties, as well as 300,000 pounds worth of medicines and pharmaceutical supplies.

“We have all been appalled by the abhorrent images of hospitals deliberately targeted by Russia since the invasion began over two months ago,” Prime Minister Boris Johnson said.

“The new ambulances, fire engines and funding for health experts announced today will better equip the Ukrainian people to deliver vital health care and save lives.”