On the eastern front, Ukraine struggles to keep up morale | Inquirer News

On the eastern front, Ukraine struggles to keep up morale 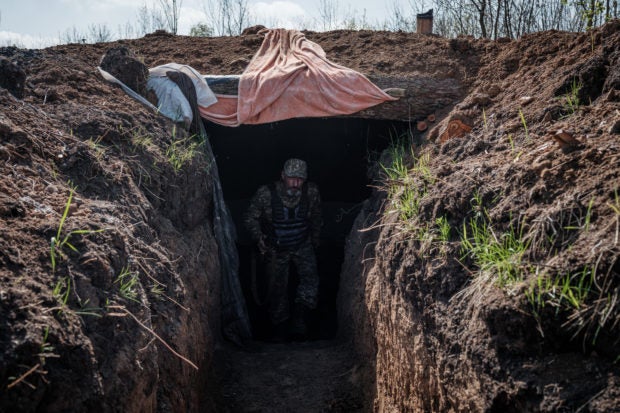 A Ukrainian serviceman walks in a trench near Barvinkove, eastern Ukraine, on April 25, 2022, amid the Russian invasion of Ukraine. AFP

BARINKOVE, Ukraine—In the chaos of the battle for Barinkove on Ukraine’s eastern front, the country’s best-known singer, Sviatoslav Vakarchuk, appears in jeans and a bulletproof vest.

A soldier rushes up to the rockstar from the band Okean Elzy for a selfie.

“We came to raise morale, to see the guys. Maybe I will sing something to them,” the 46-year-old told AFP, guitar in hand.

“Their mood is great,” he said. “I mean, they’re not happy to be here of course, but they’re very focused and determined and ready to win.

“That’s why we’re here, to (help them) understand that everything will be alright.”

But after two months under Russian fire on this unforgiving frontline, it can be hard to sustain optimism.

While soldiers have been trying to blunt the Kremlin’s assault on the Donbas region, the offensive is now concentrated here.

“In terms of morale, the situation is complicated. It’s far from rosy,” Iryna Rybakova, press officer of the 93rd brigade, told AFP.

“Of course, we were prepared for this war, especially the professional army, but for those who’ve been recruited, it’s more complicated,” the soldier said.

At the entrance to Barinkove, around five kilometers (three miles) from the Russian lines, six Ukrainian soldiers hold a checkpoint. They remain ready at any moment to dive into their trench, which they dig every day with a shovel.

After a Ukrainian barrage, a dull roar signals the Russian retaliation.

A Russian shell, fired from a hill, thuds into a field.

“They’re just adjusting now — it will take a few minutes, then (the shells) will fall all over us and the town,” warned Ygor, a 34-year-old soldier, with a grimace.

Nearby, an iron cooking pot sits on a makeshift stove, with carrots, potatoes and onions bobbing at the top of a modest broth.

Locals stepped up to supply the soldiers with everything, they say, except cigarettes.

And officially, not a drop of alcohol can be consumed on the front.

In a concealed bunker, six soldiers huddled on palettes, trying to sleep between their guard shifts.

But in the Donbas, the night is even worse than the day.

Russia’s army chooses nightfall to unleash its most powerful firepower “for psychological warfare”, Rybakova, the 93rd brigade’s spokeswoman, said as she surveyed the scene on the edge of a road.

A three-metre-long cylinder lies in a field — a Tochka, an immense Soviet-era ballistic missile.

The fearsome weapon exploded on Friday night near an abandoned school now used as a military base, leaving behind a crater with a diameter of about 15 meters (49 feet).

Russia on Friday said it wanted total control over east and south Ukraine to create a corridor to the Crimean peninsula, which Moscow annexed in 2014.

Izyum and Kreminna are among the places to have fallen to Russia’s advance in recent weeks, while Ukrainian forces focus on containment.

“We have a very fragmented frontline, which doesn’t follow a river, a road or a motorway. Now we take a village, they take one, we take one, like on a chessboard,” the 93rd brigade press officer said.

All of the region’s major roads have been altered or damaged to slow the enemy’s arrival.

The obstacles include pieces of railway line, clumps of trees, sprawling lines of defensive trenches, exploded bridges and concrete squares left on the roads to hold mines lying in wait for Russian tanks.

The soldiers who spoke with AFP acknowledged that losses have been high during the battle for the Donbas, although the local military administration refused to provide a figure.

When asked about casualties, one soldier in the 25th brigade hurled insults at the enemy before breaking down in tears.

His unit has been “very badly hit” by the last three weeks of fighting, he said.

“I lost a very good comrade, his wife is due to give birth in a few days — we preferred not to say anything.”