Mistahs troop behind Lacson in Tarlac where governor backs rival 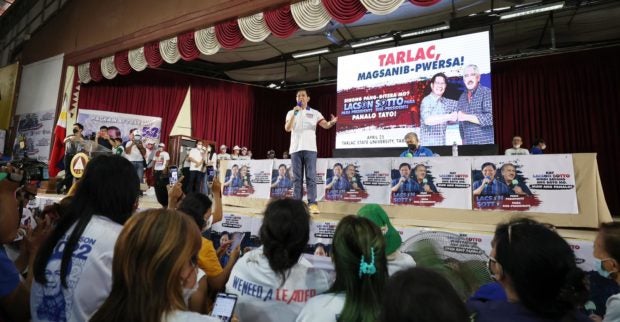 TARLAC CITY, Tarlac, Philippines — The Philippine Military Academy batch mates of presidential candidate Sen. Panfilo Lacson trooped behind him and his running mate, Senate President Vicente Sotto III, as they campaigned here with a little over two weeks to go before voters shade their ballots on May 9.

Tarlac, a vote-rich province, is considered the bailiwick of the Aquino clan.

But during a town hall meeting at the Tarlac State University on Monday, Lacson’s PMA mistahs, including those who worked with him during his stint as chief of the Philippine National Police (PNP), showed him their support by accompanying him on stage.

Among them is another former PNP chief, retired Gen. Nicanor Bartolome, who served as Lacson’s spokesperson when he was still the PNP chief.

Lacson likewise mentioned retired colonel turned lawyer Oscar Martinez, who was their valedictorian in the PMA Class of 1971, as well as Jun Fabros, who served in the Philippine Navy.

In his opening speech, Lacson acknowledged Bartolome’s active effort in supporting his candidacy.

“He has been switching places, going to Cotabato and back home to Tarlac, and he is continuing the same advocacies I had when I was chief PNP — that is, to discipline the ranks of the police force, eliminate corruption, and restore public trust to the PNP,” Lacson said in Filipino.

During the town hall meeting, the tandem’s preferred approach in their campaign, Lacson and Sotto stressed the reason why the public should vote for them.

Citing their decades in public service, they promised to properly implement laws crafted in the chamber they had served for so many years.

“Let us remember, once we enter our polling precincts and think about those we are going to vote for, may you be left with no other choice but to vote for the most qualified, most competent, who have the longest experience in public service and who are honest,” Lacson told Tarlaqueños.

For his part, former Agriculture Secretary Manny Piñol, who is running for senator, urged voters not to be swayed by performances during campaign rallies in making their choices.

In a press conference at the Tarlac Provincial Capitol, Lacson said he and Sotto were banking on the province’s “silent majority” to help them secure votes.