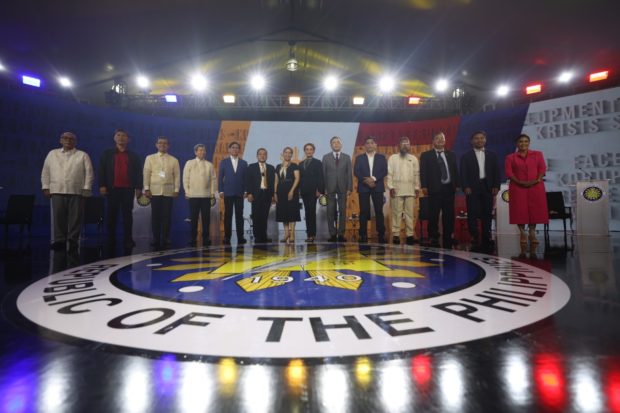 Presidential bets who joined the second Comelec debate on April 3, 2022.

MANILA, Philippnies — Commission on Elections (Comelec) Chair Saidamen Pangarungan and other poll body officials have approved the release of some P15 million in public funds to cover the money owed by Impact Hub, the organizer of the Comelec debates, to Sofitel Philippine Plaza Manila.

Documents leaked to the media on Friday night showed that Director Frances Arabe of the Education and Information Department, signed a purchase request worth P15.3 million for Impact Hub as “high-level debate organizer.”

The said purchase request was for the last three Comelec-organized presidential and vice presidential debates, dubbed the “Pilipinas Debate 2022: The Turning Point,” on April 3, April 23, and April 24.

The voucher was recommended for approval by James Jimenez, spokesperson for the Comelec, and the same was “approved for purchase” by Pangarungan.

But apparently unaware of the request’s approval, Commissioner Rey Bulay asked the officials concerned to write their “honest and clear explanations” and send them to Pangarungan and the other commission members by Monday.

In the memorandum dated April 22, Bulay questioned the presence of such a purchase request when Comelec debates “are supposed to be free as promised to all of Filipinos.”

Commissioners Bulay, Aimee Ferolino, and George Garcia earlier said in a press conference that no taxpayer money was spent for the Comelec-organized debates because the poll body was barred by law from covering the cost of the debates using public funds.

The Filipino-owned company thanked the Comelec in the same statement for letting it be its production partner in the poll body’s first three debates that pushed through on March 19, March 20, and April 3.

Debates postponed due to ‘misunderstandings’ with Sofitel, says Comelec’s contractor