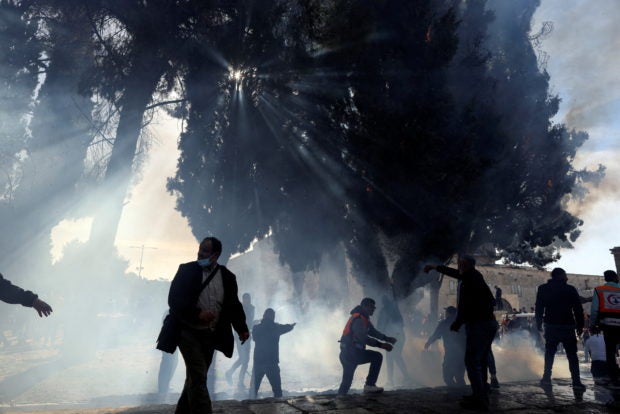 Palestinians put out a fire following a clash with Israeli security forces at the compound that houses Al-Aqsa Mosque, known to Muslims as Noble Sanctuary and to Jews as Temple Mount, in Jerusalem’s Old City April 22, 2022. (REUTERS)

JERUSALEM  – At least 57 Palestinians were injured in clashes with Israeli police within the Al-Aqsa mosque compound in Jerusalem on Friday, medics said, as violence persisted during the Muslim holy month of Ramadan at a site also revered by Jews.

Israeli police said they intervened when hundreds of people hurled rocks and fireworks and drew close to the Western Wall, where Jewish worship was underway. A policewoman was injured by a stone and a tree was set alight by the fireworks, police said.

Reuters witnesses said police entered the compound after the morning Ramadan prayers and fired rubber-tipped bullets and stun grenades at a crowd, some of whom were throwing rocks. Police also used a drone to drop tear gas, the mosque director said.

Two rockets were fired from the Gaza Strip, one falling short and the other striking across the border without casualties, the Israeli military said. No Palestinian factions claimed responsibility.

The surge of violence in Jerusalem has raised fears of a relapse into a broader conflict like last year’s war between Israel and the Hamas Islamists ruling Gaza.

Hamas fighters “have their fingers on the rifle triggers, and we will defend Al-Aqsa mosque with all our might”, Hamas official Mushir al-Masri told a rally in northern Gaza.

Since March, Israeli forces have killed at least 29 Palestinians in the occupied West Bank and 14 people have been killed in Arab street attacks within Israel, medics said.

Ramadan coincides with the Jewish celebration of Passover this year. That has brought more Muslim and Jewish visitors to the compound, which is a vestige of two ancient Jewish temples.

Palestinians accuse Israel of restricting Muslim worship at Al-Aqsa – the third-holiest site in Islam – while not doing enough to enforce a long-standing ban on Jewish prayer at the compound. Israel denies this.

As in previous years, Israel is halting Jewish visits during the final days of Ramadan, starting Friday, an Israeli official said.

Al-Aqsa compound sits atop the Old City plateau of East Jerusalem, which Israel captured in a 1967 war and annexed in a move that has not received international recognition. Palestinians want East Jerusalem as capital of their hoped-for future state.