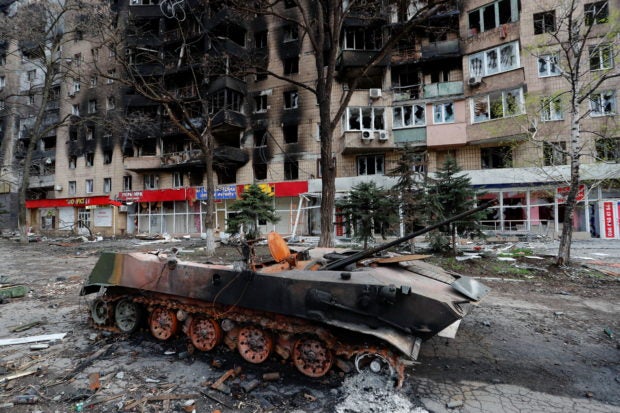 A view shows an armoured vehicle destroyed during Ukraine-Russia conflict in the southern port city of Mariupol, Ukraine April 22, 2022. (REUTERS)

KYIV/MARIUPOL, Ukraine  – Moscow wants to take full control over southern Ukraine, a Russian general said on Friday, a statement Ukraine said gave the lie to Russia’s previous assertions that it had no territorial ambitions.

Rustam Minnekayev, deputy commander of Russia’s central military district, was quoted by Russian state news agencies as saying full control over southern Ukraine would give it access to Transnistria, a breakaway Russian-occupied part of Moldova in the west.

That would cut off Ukraine’s entire coastline and mean Russian forces pushing hundreds of miles west beyond current lines, past the major Ukrainian coastal cities of Mykolaiv and Odesa.

Moscow says it is conducting a “special military operation” to demilitarise Ukraine and liberate its population from dangerous nationalists. Ukraine and its Western allies call Russia’s invasion an unjustified war of aggression.

“They stopped hiding it,” Ukraine’s defence ministry said on Twitter. Russia had “acknowledged that the goal of the ‘second phase’ of the war is not victory over the mythical Nazis, but simply the occupation of eastern and southern Ukraine. Imperialism as it is.”

In Washington, Secretary of State Antony Blinken met with Ukrainian Prime Minister Denys Shmyhal and the State Department said he “reinforced our determination to help Ukraine successfully defend itself against Russia’s brutal and unjustified war of aggression.”

He also said allies were finally delivering the weapons Kyiv had asked for and they would help save the lives of thousands of people.

U.S. President Joe Biden said on Thursday he had authorized a further $800 million in military aid for Ukraine, including heavy artillery, ammunition and tactical drones.

Canada said on Friday it had provided heavy artillery to Ukraine, following up on a pledge by Prime Minister Justin Trudeau earlier this week to send more artillery.

U.S. State Department spokesperson Jalina Porter declined specific comment on Minnekayev’s statement but said Washington firmly supported Moldova’s sovereignty and was “clear-eyed” about events on the ground. “No one should be fooled by the Kremlin’s announcements,” Porter said.

Kremlin spokesman Dmitry Peskov declined to comment when asked if Russia had expanded the goals of its operation and how Moscow saw the political future of southern Ukraine.

A senior EU official said the next couple of weeks would likely be decisive.

Ukraine’s military said Russian forces had increased attacks all along the frontline in the east and were attempting an offensive in the Kharkiv region, north of their main target, the Donbas.

Russia’s defence ministry said its forces had captured a large arms depot in the Kharkiv region. It also reported hitting dozens of targets in the Donetsk and Kharkiv regions on Friday.

In Kharkiv city, shellfire hit the main Barabashovo market. Ambulance services said there had been casualties but gave no details. A wedding hall and a residential building were also struck.

In Geneva, the United Nations human rights office said there was growing evidence of Russian war crimes, including indiscriminate shelling and summary executions. It said Ukraine also appeared to have used weapons with indiscriminate effects.

Russia denies targeting civilians and says, without evidence, that signs of atrocities committed by its soldiers were faked. Ukraine has previously said it will punish any soldiers found to have committed war crimes. It did not respond immediately to the U.N. office’s remarks.

Russia’s defence ministry said thousands of Ukrainian troops holed up in a huge steel works in Mariupol, the main port of the Donbas, were “securely blockaded”, a day after President Vladimir Putin said the army would not bother rooting them out.

Putin has declared victory in the city after a nearly two-month siege, an announcement dismissed by Pentagon press secretary John Kirby, who told CNN there was still an active Ukrainian resistance.

In a Russian-held section of Mariupol, the guns had largely fallen silent and dazed-looking residents ventured out on Thursday to a background of charred apartment blocks and wrecked cars. Some carried suitcases.

Volunteers in white hazmat suits and masks roved the ruins, collecting bodies from apartments and loading them on to a truck marked with the letter “Z”, symbol of Russia’s invasion.

Ukraine estimates tens of thousands of civilians have died in Russia’s bombardment and siege of the city and says 100,000 civilians are still there and need full evacuation.

Ukrainian Deputy Prime Minister Iryna Vereshchuk on Friday said “there is a possibility” a humanitarian corridor out of Mariupol could be opened up on Saturday.

Relatives of residents feared the worst. In Lviv, Sofia Telehina said her grandmother in Mariupol had cried constantly when they last spoke by phone and said everything was bombed to pieces. “Since then I’ve not been able to reach her,” she said.

In Zaporizhzhia, where 79 Mariupol residents arrived in the first convoy of buses permitted by Russia to leave for other parts of Ukraine, Valentyna Andrushenko held back tears as she recalled their ordeal.

“They (Russians) were bombing us from day one. They are demolishing everything.”

Moscow says it has taken 140,000 Mariupol residents to Russia. Kyiv says many were forcibly deported in what would be a war crime.

Separately on Friday, Russia’s defence ministry confirmed for the first time that the crew of its Black Sea flagship Moskva, which Ukraine says it hit with an anti-ship missile, suffered casualties when it blew up and sank last week, a report from RIA news agency indicated.

“During the struggle to stabilize the ship, one serviceman died and another 27 crew members went missing,” RIA quoted the defence ministry as saying.

The Pentagon said more than 20 countries would attend U.S.- hosted defence talks in Germany next week to consider Ukraine’s long-term defence relationships once the war is over.