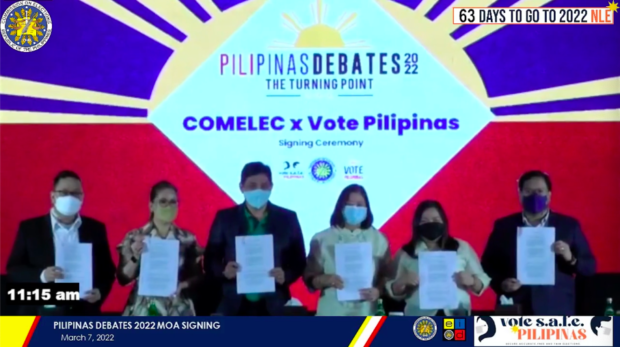 The Commission on Elections and Vote Pilipinas signed a memorandum of agreement on March 7 in Pasay City to stage the Pilipinas Debates. (Screengrab from Comelec’s Facebook page)

MANILA, Philippines — Commission on Elections (Comelec) spokesperson and public information director James Jimenez, as well as other poll officials are being asked to explain the reason behind the issues which led to the rescheduling of the final leg of the presidential and vice presidential debates.

Jimenez, in a message to reporters on Friday night, said Comelec commissioner Rey Bulay is demanding a written explanation from him and other poll body officials as to what prompted the cancellation of the vice-presidential and presidential debates that the poll body was supposed to host on April 23 and 24, respectively.

The debates were rescheduled to April 30 and May 1.

“Early evening today, in a sealed envelope, I received a copy of an interoffice memorandum from the Hon. Commissioner Rey Bulay, directing myself and others to submit a written explanation on the circumstances leading up to and including the rescheduling of the PiliPinas Debates 2022,” Jimenez told reporters.

“However, it appears now that the same memorandum has been leaked to the media for whatever reason,” Jimenez added.

The adjustment in the debates schedule came after Impact Hub Manila, Comelec’s partner for the PiliPinas Debates, reneged on its P14 million obligation to Sofitel Philippine Plaza Manila, the venue of the third round of the debates.

An ABS-CBN report, citing an internal memorandum, reported that Bulay flagged several possible irregularities with the poll body’s deal with Impact Hub. Bulay also pointed out that some Comelec officials were willing to cough up P15 million tab to cover Impact Hub’s liabilities with Sofitel.

It was also revealed that Jimenez and another Comelec director, Frances Arabe, vouched for the release of the P15 million, with Comelec chairman Saidamen Pangarungan and commissioner Socorro Inting approving the disbursement without it being discussed in the en banc, which Bulay questioned.

Commissioner George Garcia, meanwhile, assured that the poll body has yet to release funds for the postponed debates.

Jimenez said he will respond to Bulay’s letter in due time.

“The memorandum has set a deadline for the response it demands, and I — as well as all other recipients of the memorandum — fully intend to meet that deadline. Just as importantly, due deference to the Honorable Commissioner dictates that any response I make should be made to him, first and foremost. For this reason, I would refrain from any further comments on the matter for now,” he said.

For its part, Impact Hub admitted that they have had a “misunderstanding” with Sofitel. The company, however, did not further elaborate.

“While there have been incomplete reports as to the cause of the miscommunication, Impact Hub Manila will refrain from publicly divulging these matters and will endeavor to discuss them with Sofitel and other stakeholders privately,” the company said in a statement on Saturday.