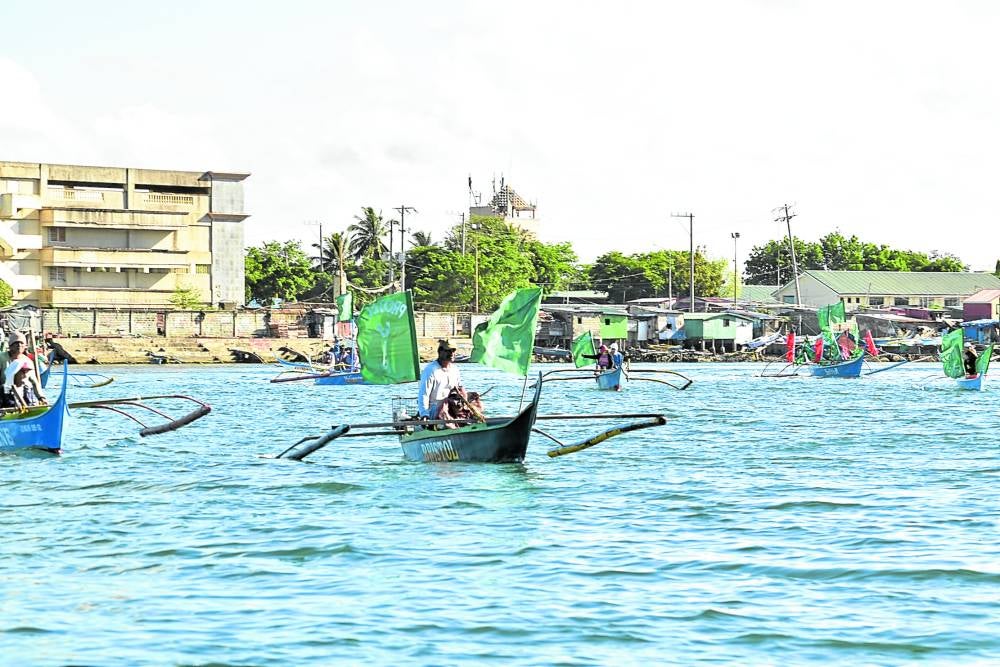 OFF TO THE SEA FOR A CAUSE Fishers and environmentalists commemorate Earth Day on Friday by sailing from the shore of Batangas City to bring attention to the need to protect Verde Island Passage, a resource-rich body of water spanning Batangas, Marinduque, Romblon and the Mindoro provinces, which is threatened by natural gas exploration activities. —PHOTO FROM PROTECT ISLA VERDE PASSAGE GROUP FACEBOOK PAGE

In a statement, advocacy group Protect VIP said the protesters boarded 20 boats to stage a fluvial parade that started at 7 a.m. in Barangay Sta. Clara in Batangas City and sailed to a fossil gas project site in the village of Ilijan.

“The fluvial protest denounces plans to develop a whole fleet of new fossil gas and liquefied natural gas (LNG) facilities in Batangas City despite its proximity to an ecologically sensitive marine corridor known as the VIP,” the group said.

Protect VIP is a network of civil society and faith-based groups, youth and community stakeholders united in the fight to preserve the marine and terrestrial zone of rich biological diversity spanning almost 2 hectares located more than 100 kilometers south of Manila.

VIP traverses through the provinces of Batangas, Marinduque, Romblon, Occidental Mindoro and Oriental Mindoro, which was recognized as the “center of global shorefish biodiversity” due to the high densities of marine resources in the area.

“Today’s protest is a celebration of the rich biodiversity in the Verde Island Passage, yet also a lament for the certain destruction it would suffer should fossil gas and LNG projects in Batangas push through,” said Fr. Edwin Gariguez, lead convener of the Protect VIP campaign network and social action director of the Apostolic Vicariate of Calapan, Oriental Mindoro.

The protesters described VIP as the “epicenter” of fossil gas and LNG developments in the country, as eight of 27 proposed new plants and seven of the nine planned LNG terminals nationally are located in Batangas.

Gerry Arances, of the think tank Center for Energy, Ecology, and Development and a coconvener of Protect VIP, argued that fossil gas and LNG operations would create “great disturbance in marine ecosystems, cause thermal pollution and emit greenhouse gas emissions that trigger worse climate change.”

“It’s a great wonder we are risking VIP and ignoring the climate emergency in exchange for an energy source that will only provide an unreliable and costly electricity supply,” Arances said.

The protesters called on fossil gas proponents and financiers to “back off” as they also urged upcoming leaders in national and local governments to protect VIP.

“Companies and financial backers behind these projects should know that they are doing the people of Batangas and the Philippines no favor,” Arances said.

One of the Philippines’ richest fishing grounds, VIP teems with hundreds of species of fish, sea turtles, mangroves, seagrass, nudibranchs and corals that some described as “extremely rare.”

The lives of over 2 million people from five provinces are inextricably connected to VIP, their main source of livelihood.

TJ Alcantara, a member of the Youth for VIP, said the younger generation understands that any development that places VIP in peril “also threatens our chance to live in a secure and sustainable future.”

“Our survival is at risk, and this demands that we stand up for VIP,” he stressed.

Alcantara asked voters in the coming local and national elections to use their political exercise “to ensure that this marine ecosystem and the communities thriving around it will be protected.”

“We hope our leaders in government will also prioritize VIP and exert their utmost effort to protect it from fossil gas and LNG,” Alcantara said.