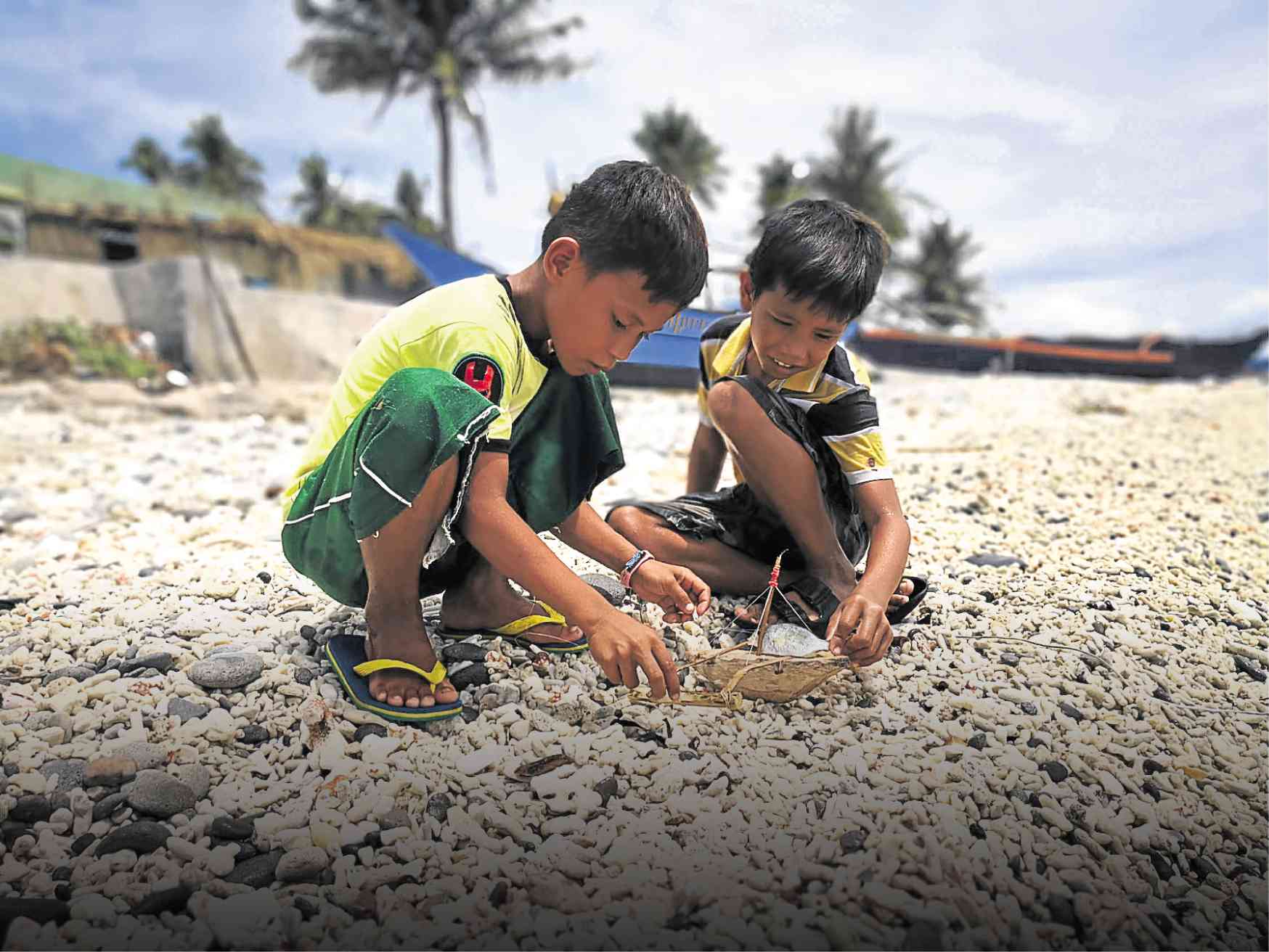 PLAYTIME In the absence of electronic gadgets, children in the fishing community of San Andres on Verde Island in Batangas province spend their idle time playing with a toy boat that they made from scrap wood. —PHOTOS BY CLIFFORD NUÑEZ

VERDE ISLAND, Batangas — Casting a fishing line with a coral sinker and a plastic-bottle reel, children as young as 8 years old catch their next meal from the pebbled shore of Barangay San Andres here.

Most of the women are at home, raising hogs or weaving “buli” (palm) mats, while the men are out at sea to fish for food or collect aquarium fish to sell in Metro Manila.

Their houses dot a hillslope, built to withstand the frequent storms. Drinking water comes from deep wells while electricity is supplied by several solar panels.

Life is simple and slow in San Andres, a small, poor community on Verde Island along the Verde Island Passage (VIP), a marine and terrestrial zone of rich biological diversity spanning almost 2 hectares and more than 100 kilometers south of Manila.

Biologists have discovered a thriving marine ecosystem (1.14 million ha) along the passage in what most people called the “richest place on earth.”

The lives of over 2 million people from at least five provinces — Batangas, Oriental Mindoro, Occidental Mindoro, Marinduque and Romblon — are inextricably connected to the VIP, their main source of livelihood. As of 2015, the combined population of the provinces was 4.5 million.

One of the Philippines’ richest fishing grounds, the marine corridor teems with hundreds of species of fish, sea turtles, mangroves, sea grass, nudibranchs and corals some described as “extremely rare.”

It is a potentially huge source of genetic resources for biomedicine, according to Titon Mitra, country director of the UN Development Programme (UNDP).

In 2005, Kent Carpenter, a professor of Old Dominion University, and Victor Springer, a scientist of Smithsonian Institution, released their findings on the VIP that people began talking about what they called the “center of the center of marine shore fish biodiversity.”

In 2006, then President Gloria Macapagal-Arroyo issued Executive Order No. 578 stating a national conservation policy of the VIP. 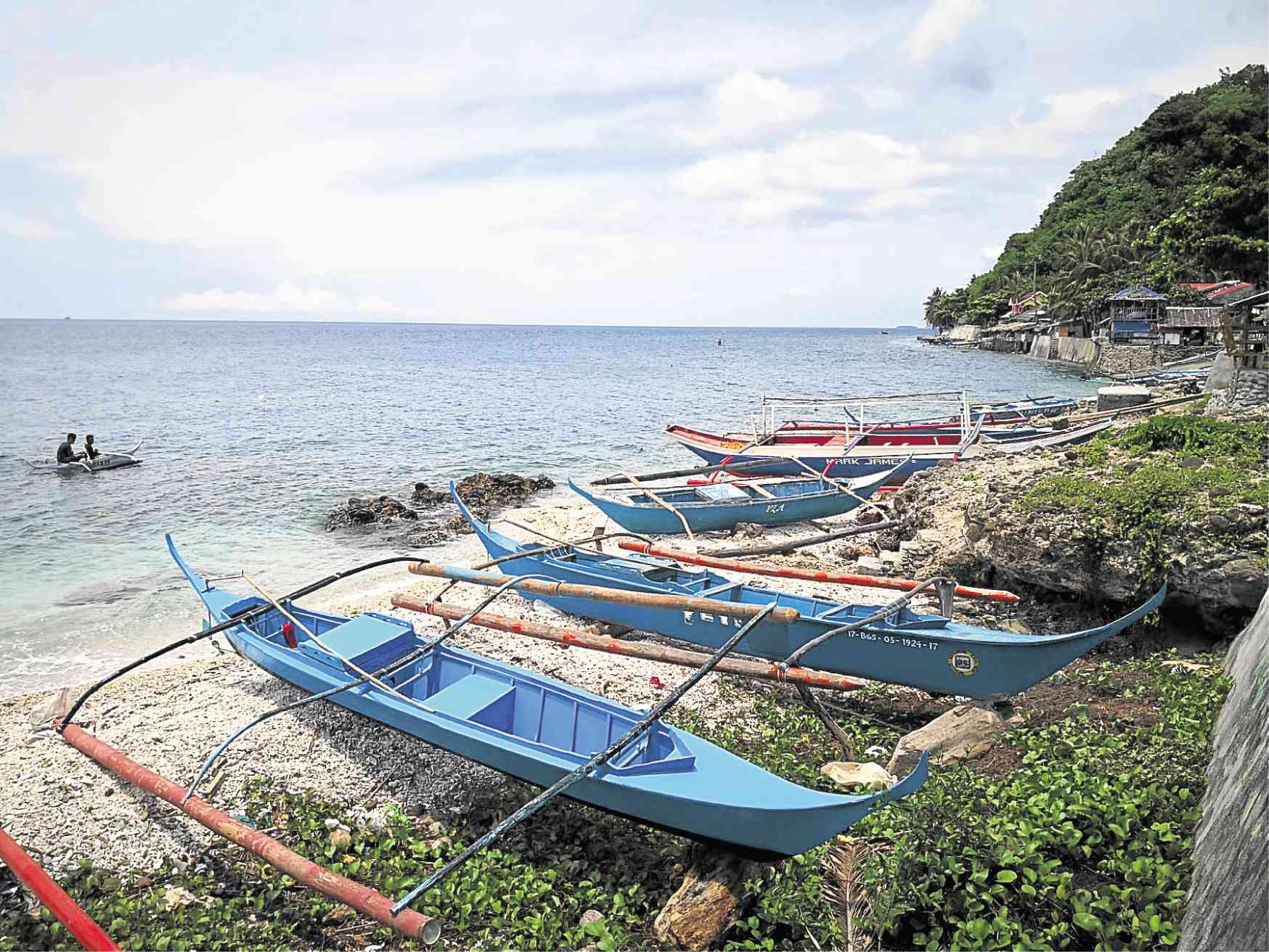 BOAT PARKING Boats are important to residents of Verde Island, a marine corridor teeming with fish and other marine resources, as local families depend on fishing for a living.

San Andres villagers, in particular, engage in aquarium fishing, an unsustainable and destructive practice that involves cyanide use.

Failure to address the threats will put the Philippines in an “embarrassing” situation as it is also a party to many other international conservation treaties, Montebon said.

Only in 2015 did conservation efforts go full blast. That year, the VIP was selected one of the sites for the Strengthening the Marine Protected Area System to Conserve Marine Key Biodiversity Areas (SMARTSeas), a project funded by the UNDP and implemented by the Department of Environment and Natural Resources (DENR).

“I think people here are quite aware that we are at the center [of marine biodiversity],” said Arnold Briton, barangay chair of San Andres. “We always tell our aquarium [fishermen], ‘If you happen to see plastics in the corals, take them out because we have [the sea] as our only source of income,’” he said.

They have abandoned cyanide-fishing a long time ago, Briton said.

The village holds regular coastal cleanups, but unfortunately, it does not have funds to build a landfill and household garbage are either recycled, buried or burned.

In 2016, the University of the Philippines’ Marine Science Institute studied the sanctuaries or marine protected areas (MPAs) within the VIP and found the entire ecosystem “connected.”

This meant that “you cannot pick one MPA out since it is part of a network,” said Dr. Vincent Hilomen, project manager of SMARTSeas.

An MPA is the government’s primary approach to protect specific species. It serves to replenish the fish population by creating a spawning stock (number of fish capable of reproduction), balance the species’ age structure, and create a “spill over effect” once the mature fish leave the sanctuary.

In the VIP, the protected zones initially covered 17,000 ha of critical habitats. About 2 percent, or 3,000 ha of mostly fish breeding grounds, are strictly “no-take zones” and the rest allowed for hook-and-line fishing and other nondestructive activities.

San Andres fishermen often run into trouble in these villages, as people believe they still practice cyanide-fishing. Briton said the sanctuaries had reduced the fishing grounds of aquarium collectors, who are forced to go farther out and deeper in the sea to meet industry demands.

To keep their heads above water, fish collectors train as diving guides on Verde Island for extra income.

Another alternative by the government is an in-captive breeding of certain aquarium species, while a Batangas lawmaker has promised them jobs in resorts once tourism on the island goes full blast, Briton said. 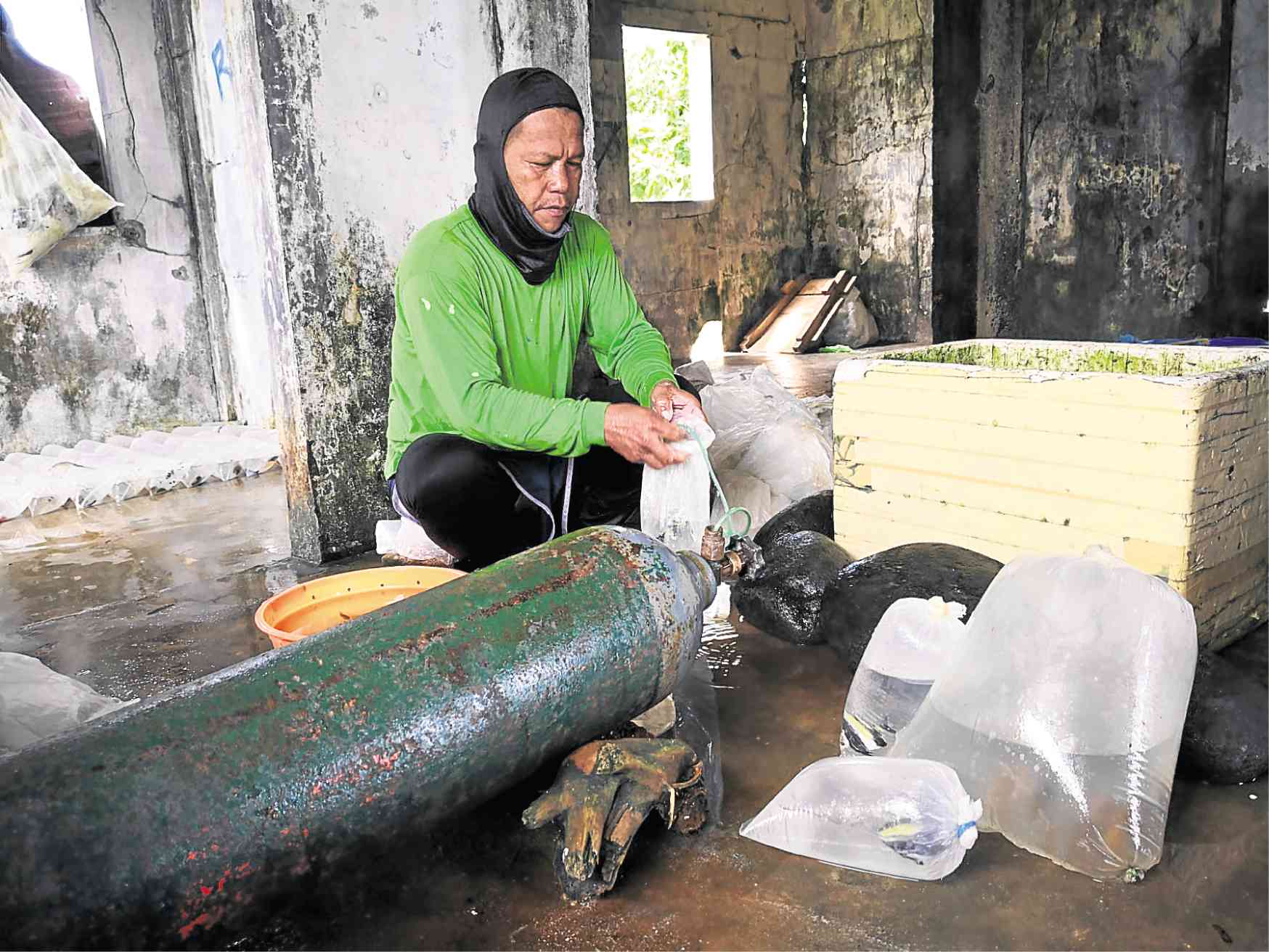 AQUARIUM FISH TRADE A fish collector changes water and pumps fresh oxygen into bags that contain live ornamental fish as these are readied for tansport to Metro Manila.

“[Having an MPA] does not necessarily mean you’re closing the area entirely from all activities. That’s the wrong notion,” Hilomen said. An MPA protects not only the fish stock, but also the reefs, mangroves and the rest of the underwater resources, he said.

To streamline government policies, an agreement was signed to form a single MPA network among the five VIP provinces, the DENR, the Bureau of Fisheries and Aquatic Resources, and law enforcement units. Environment Secretary Roy Cimatu signed it in August.

“It’s like all these smaller MPAs put under a bigger MPA,” Montebon said.

The VIP network, the first one formed among key biodiversity areas in the Philippines, helps draw support from the national government and external funding institutions.

Batangas Gov. Hermilando Mandanas, whose province has the biggest population in the VIP, raised concerns about alternative livelihood for fishermen to discourage overfishing. “We have to have a lot of jobs for the fishermen so they won’t go fishing anymore,” he said.

In a meeting in September, the governors pushed for ecotourism projects in the VIP and agreed to invest more and include marine protection programs in local development plans.

Montebon said his group, Conservation International-Philippines, welcomed the initiatives so long as these stayed within the natural limits of the VIP. Marine ecosystems are “like a tree that you can’t keep asking for more than the fruits it can actually bear,” he said.