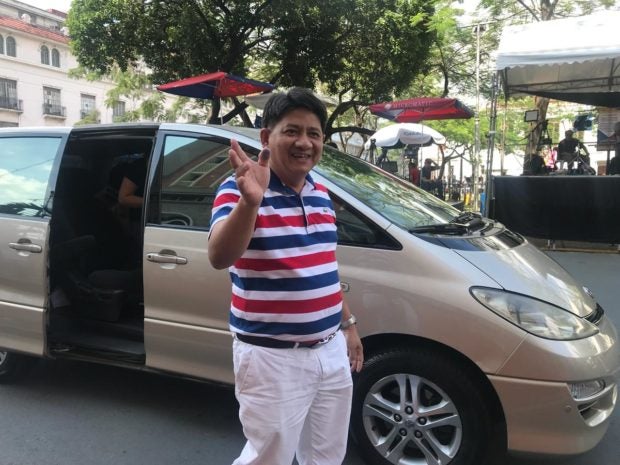 During the UniTeam rally in Biñan in Laguna on Thursday, Duterte-Carpio introduced Gadon while asking the senatorial candidate if the disbarment case against him is still pending.

Duterte-Carpio, in jest, then said that she would hire Gardon since—like her—he also has experience in facing disbarment cases.

(He is mad at stupid people. For real change, choose a new leader who is not stupid–Larry Gadon!)

Gardon is a part of the UniTeam slate of Duterte-Carpio and presidential candidate Ferdinand “Bongbong” Marcos.

Duterte-Carpio is facing a disbarment complaint against her which stemmed from the July 1, 2011 incident in Davao City where she punched Sheriff Abe Andres during a demolition inside a contested property in Barangay Soliman in Davao’s Agdao district.

Meanwhile, the Supreme Court has preventively suspended Gadon, who is a lawyer, following his verbal assault on journalist Raissa Robles. The High Court ordered him to explain why he should not be disbarred.

In December last year, Gadon posted a video of himself cursing and insulting Robles after she tweeted about the tax case of Marcos. His rants were laden with expletives, which the Foreign Correspondents Association of the Philippines (Focap) described as “unbecoming conduct.”

The high court motu proprio (on its own) treated the controversy as a formal administrative complaint for disbarment against Gadon. Prior to this, Gadon is already facing other disbarment complaints.

SC suspends Gadon, tells lawyer to explain why he should not be disbarred

Gadon doubts SC suspension order vs him: Could this be politically motivated?