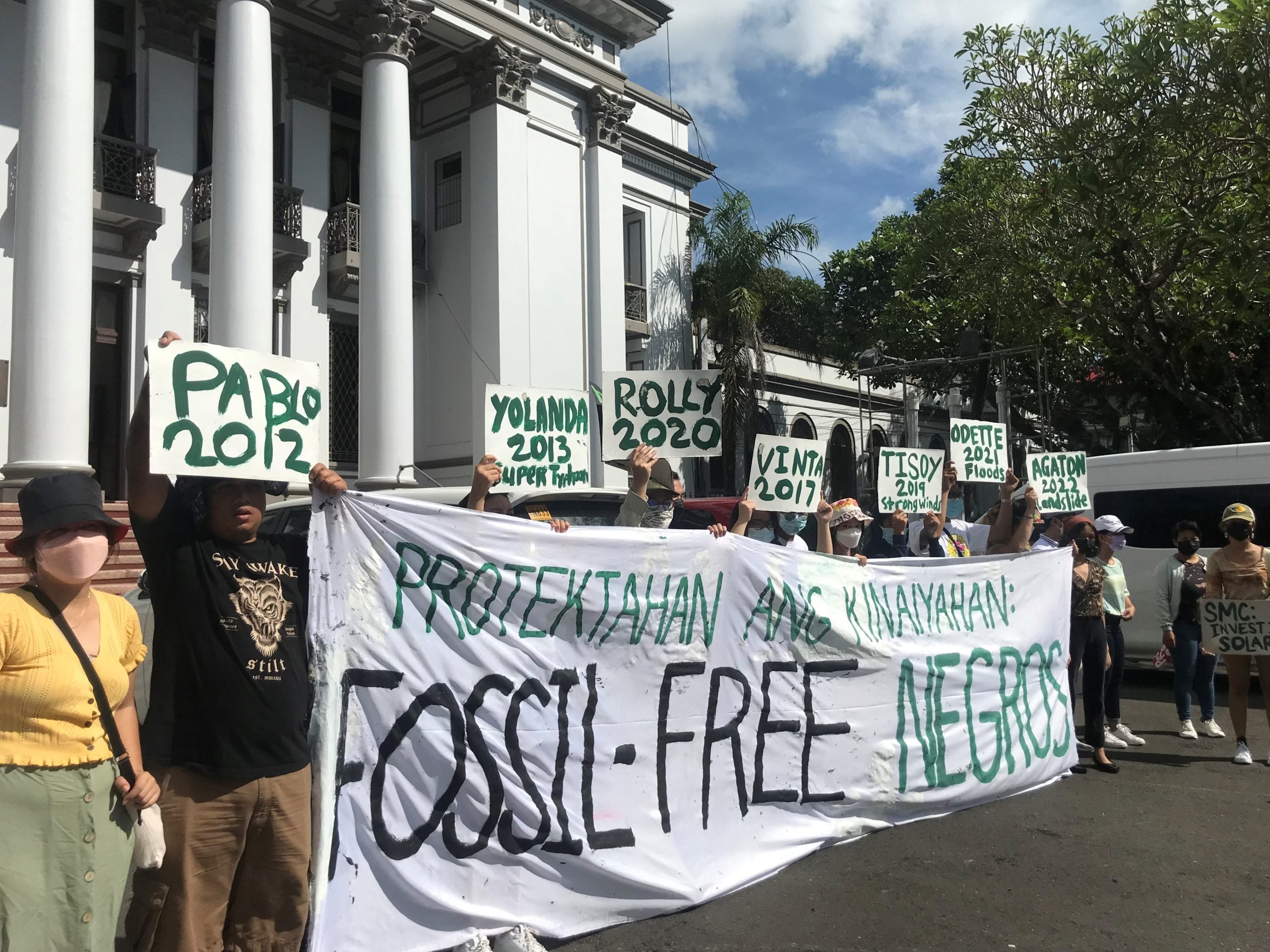 A silent protest was held by different groups at the Negros Occidental Capitol in Bacolod City on Earth Day, April 22. (Photo courtesy of Y4CH)

The LNG plant is a project of Reliance Energy Development Inc. (REDI), a wholly owned subsidiary of San Miguel Corporation (SMC). In 2021, president Ramon Ang announced SMC will be converting its then proposed coal plant with LNG as a way to prove true its commitment to clean energy, a press statement sent by the  Youth for Climate Hope (Y4CH) said.

“SMC seems to think it is doing us a favor by shifting from coal to gas, when the reality is it is merely switching lanes while driving us down the same road to climate destruction,” said Bianca Montilla, Y4CH co-convenor said.

Its proponents and backers, including government authorities, have touted natural gas – more appropriately fossil gas – and LNG as a clean alternative to coal. While less carbon-intensive than coal, however, fossil gas and LNG emit methane throughout its value chain, a greenhouse gas with 80 times more heat trapping capacity than CO2 over a span of 20 years.

“Negrosanons receive some of the worst impacts of the raging climate crisis. We have barely recovered from Typhoon Odette, yet Typhoon Agaton came and once again wreaked havoc. There is no place here for a fossil fuel project that will only doom us to a worse climate situation,” said Paul Daniel Serrano of Y4CH.

Negros Island is known as the renewable energy capital of the Philippines, yet its people barely benefit from the cheap and clean electricity that renewable facilities in it produce as electric cooperatives opt to purchase power from fossil fuel plants outside the island. The groups are concerned a gas project will make it more difficult to amend this situation.

“Just this month, CENECO hiked its rates because the price of imported coal keeps soaring. With SMC’s plant, fuel will also be coming overseas and exposed to various volatilities. Why force consumers to bear the burden of high power prices when we have an abundance of affordable renewable energy we simply need to work on maximizing?” asked Grid Langco of Konsyumer Negros.

The groups had also been present at the first public scoping of SMC for the LNG project in March, in which the proposal was met with grave concern by local stakeholders.

“We continue to urge president Ramon Ang not to hinder our hope for a 100% renewable energy future, and for SMC to do its part in preserving our Earth by cancelling its plans for fossil gas and LNG development – not only here in Negros, but the rest of the country. That is what a genuine commitment to clean energy will look like,” said Bishop Gerry Alminaza of the Diocese of San Carlos, convenor of REpower Negros.

After actively taking part in the advance of coal in the last decade, SMC now leads the expansion of fossil gas and LNG nationally with a pipeline of over 13 GW  – including in Leyte, Zamboanga, Navotas, and a biodiversity hotspot in Batangas. Painting Earth Day as a day of action against LNG, environmentalists and local communities also held a protest against gas developments in the area of the Verde Island Passage.

“We are risking our climate ambitions, the environment, and the welfare of consumers and affected communities for an energy source that is not even able to assure cheap and reliable electricity. SMC and all backers of LNG should know they are doing the people of Negros, Batangas, or the Philippines no favor,” said Gerry Arances, convenor of broad energy advocacy and consumer group Power for People Coalition (P4P).

The youth-led group laid their case in a position paper, signed by 22 local youth organizations, which will be presented to the Provincial Board next week.

“Three years ago, the provincial government stood with the youth on the right side of climate action by granting our cry for an order that will keep coal out of Negros Occidental. We now ask it to do the same: declare all fossil fuels, be it coal or gas, unwelcome in this province,” said Krishna Ariola of Y4CH.