One Cebu all about Cebuano masses, not politicians, says Robredo 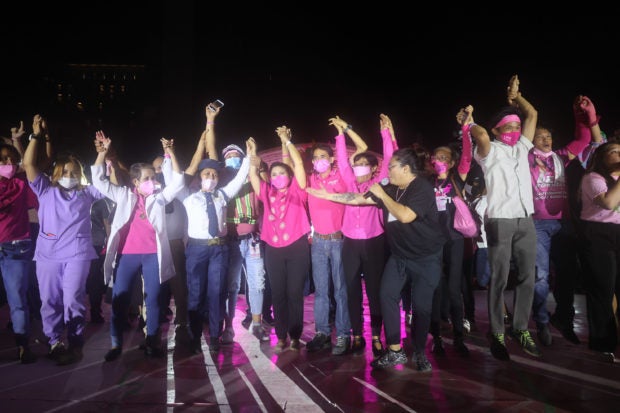 MANDAUE CITY, Cebu — Top politicians of the vote-rich Cebu may have raised the hand of her stiffest rival for the presidency, but Vice President Leni Robredo appeared undaunted as some 150,000-strong Cebuanos came to show their support during her team’s second grand rally in the province on Thursday night.

Speaking during the Ceboom 2.0 Grand Rally in Mandaue City, Robredo said that “One Cebu” is not about politicians uniting for the elections, but rather a force made up of ordinary Cebuanos, just like the mammoth throng who have gathered to support her.

(And tonight, we have show that true power is in our hands.)

During the rally also, Robredo allayed the fears of her supporters who may have grown weary of seeing other candidates get the endorsement of their local officials, saying that even without money or machinery, they still have a chance at the elections because of their collective efforts. 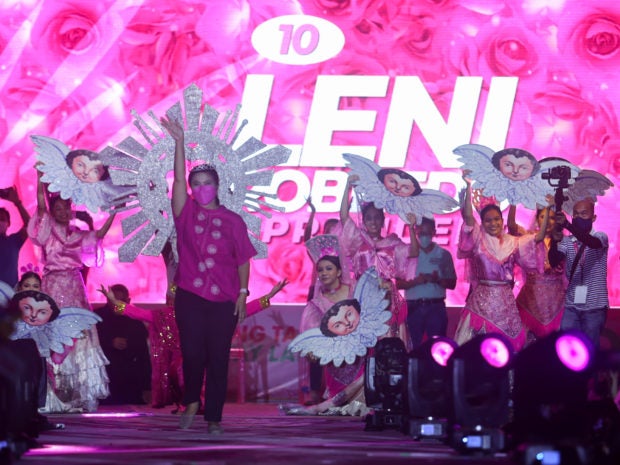 And if she wins despite odds stacked against her — Robredo said it would only prove that the power indeed resides with the people.

(Sometimes there are doubts. How do we fight when almost all politicians have formed alliances already? How do we continue when we have limited funding, no political machinery? But tonight we have shown that money and machinery do not stand a chance against a united populace.)

(If we show that during the election, that even if we do not have many political allies, if we win, we can show who really is powerful.  And that is you!  Now, I am amazed that even at the farthest point of this area we have supporters with us.)

Filled to the brim

The grand rally of Robredo and her running mate, Senator Francis Pangilinan, was held on a 5.2-hectare lot, which was filled to the brim. Those who could not get inside opted to stay on nearby streets and watched the sortie through large screens mounted by organizers.

The nearby Bai Hotel, which has 668 rooms, was fully occupied on Thursday –the first time since the start of the pandemic.

Most of the guests attended rally opted to stay in hotel rooms than go home after.

According to Ricky Ballesteros, one of the organizers, the crowd reached over 200,000.

“Let the science explain. The area is 52,629 square meters, then times five people. The venue was full. We can’t deny that,” he explained.

During the rally of Marcos on a 3-hectare property at the South Road Property, police pegged the crowd at 300,000.

Lt Col. Wilbert Parilla, deputy director for operations of the Cebu City police, later admitted that the venue could only accommodate 120,000 but he included those who had attended at various time of the eight-hour event but had gone home before the main program.

Before the grand rally in Mandaue, Robredo earlier toured Cebu province’s northern portion, visiting Bantayan Island, then Danao and Bogo City and its nearby towns. Mandaue City was the Vice President’s last stop, where local organizers claimed over 150,000 people converged to give her a warm welcome.

Robredo appealed to the electorate to help her win the presidency so she could serve Filipinos more.

She pointed out that either she nor any member of her slate had ever been linked to corruption.

She vowed that her government would be close to the people, even those in remote areas, so they would not feel they had been abandoned.

She added she went on to provide projects and programs as well as relief operations during calamities through the Office of the Vice President, “even if it wasn’t an election season.”

However, in 2016, Robredo enjoyed the backing of the administration, while now, she is running as an opposition candidate, and facing an uphill challenge as Marcos still holds a commanding lead according to surveys.

While Robredo is second place in Pulse Asia’s March polls at 24 percent, Marcos got a 56% voter share.

Cebu province, which comprises 44 towns and six component cities, is the country’s most vote-rich province with 3.2 million voters.