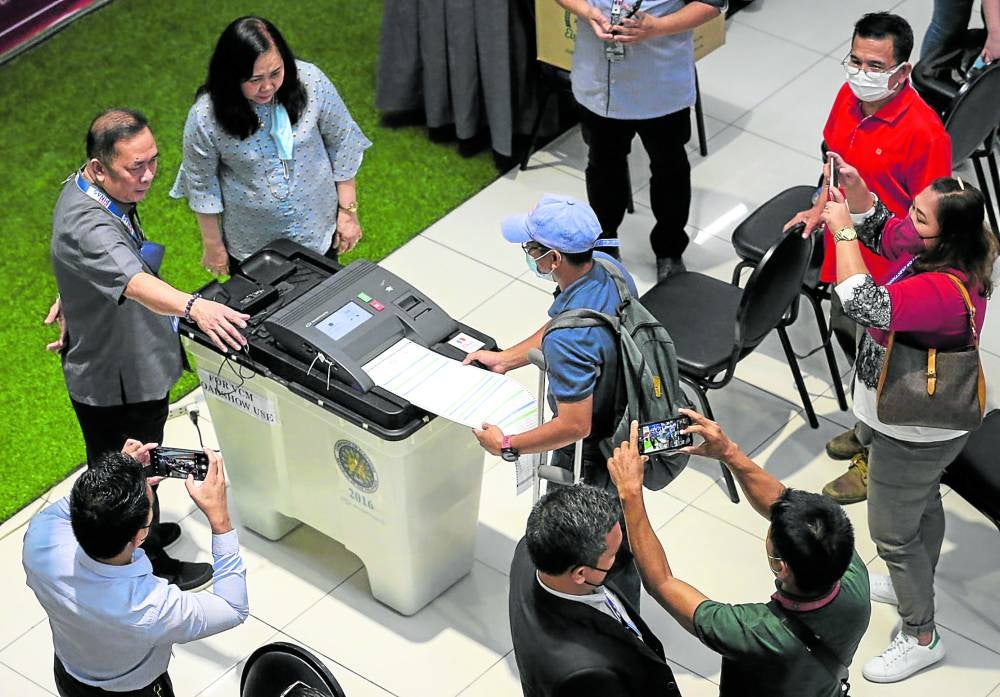 PREELECTION ROADSHOW The Commission on Elections conducts a demo on the operation of the vote-counting machines to be used in the May 9 polls, with a PWD (person with disability) casting a mock ballot, at a shopping mall in Barangay Sta. Lucia, Pasig City, on Wednesday. —LYN RILLON

MANILA, Philippines — The online precinct finder of the Commission on Elections (Comelec) will be activated by the Department of Information and Communications Technology (DICT) today, an official of the poll body said on Thursday.

“According to the DICT, they are putting the final touches on the Cloudflare (software) to secure the voter verifier,” Comelec Commissioner George Garcia said, recalling that the Comelec precinct finder website was hacked in 2019.

On Thursday morning, Garcia said they were just waiting for the DICT to switch on the precinct finder, which is designed to address the perennial problem of voters finding difficulty locating their assigned polling places.

Garcia said their voter database was ready but the precinct finder remained offline as of Thursday because of the DICT, which will host all of Comelec’s online services, including the election results website.

The Comelec, however, is behind schedule in distributing the voter information sheet (VIS) supposedly to each of the record 67,442,616 Filipinos registered to vote on May 9.

Under Republic Act No. 7904, which was enacted in 1995, the Comelec must provide all registered voters, through registered mail, with a VIS at least 30 days before an election, or by April 9 for next month’s voting.

The VIS includes the voter’s name, address, polling precinct, place where he or she is registered as a voter, and simplified instructions to cast his or her vote.

As of April 13, the Comelec has completed printing all the VIS forms, according to records.

Meanwhile, Garcia said a total 372,878 printed ballots were confirmed to be “defective” and have to be reprinted.

He said the Comelec would set the date for the destruction of the defective ballots before stakeholders after the National Printing Office has completed reprinting the ballots and printing all other election forms.

As of March 12, Comelec data showed that 412,874 polling precincts have been established nationwide for a total 65,745,526 voters who will vote locally. As of April 18, the poll body reported that 37,214 voting centers would be set up nationwide.

The vast majority, or 1,023,637 overseas voters, have indicated they would vote in-person while the rest would send their ballots by mail.