Honduran ex-president extradited, flying to US to face drug charges 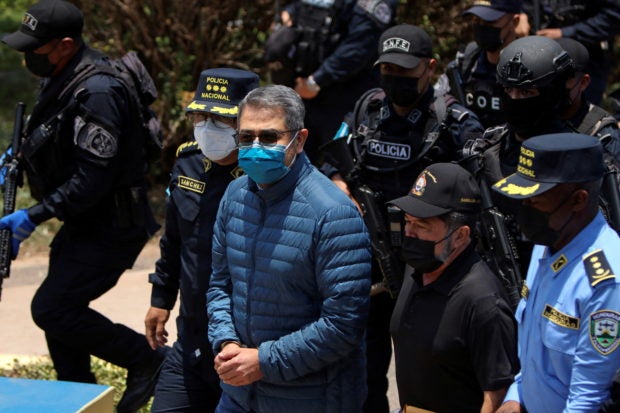 Honduras former President Juan Orlando Hernandez is escorted by members of the National Police as they head towards a helicopter to transport him to the Hernan Acosta Mejia Air Force Base for his extradition to the United States, to face a trial on drug trafficking and arms possession charges, at a police base in Tegucigalpa, Honduras April 21, 2022. REUTERS/Jonathan Lazo

TEGUCIGALPA, Honduras — Former Honduran President Juan Orlando Hernandez was extradited to the United States on Thursday where he is set to face drug trafficking charges, capping a dramatic fall from grace after the conservative leader left office earlier this year.

A U.S. Drug Enforcement Administration plane took off with Hernandez aboard from the Honduran capital’s airport on Thursday afternoon.