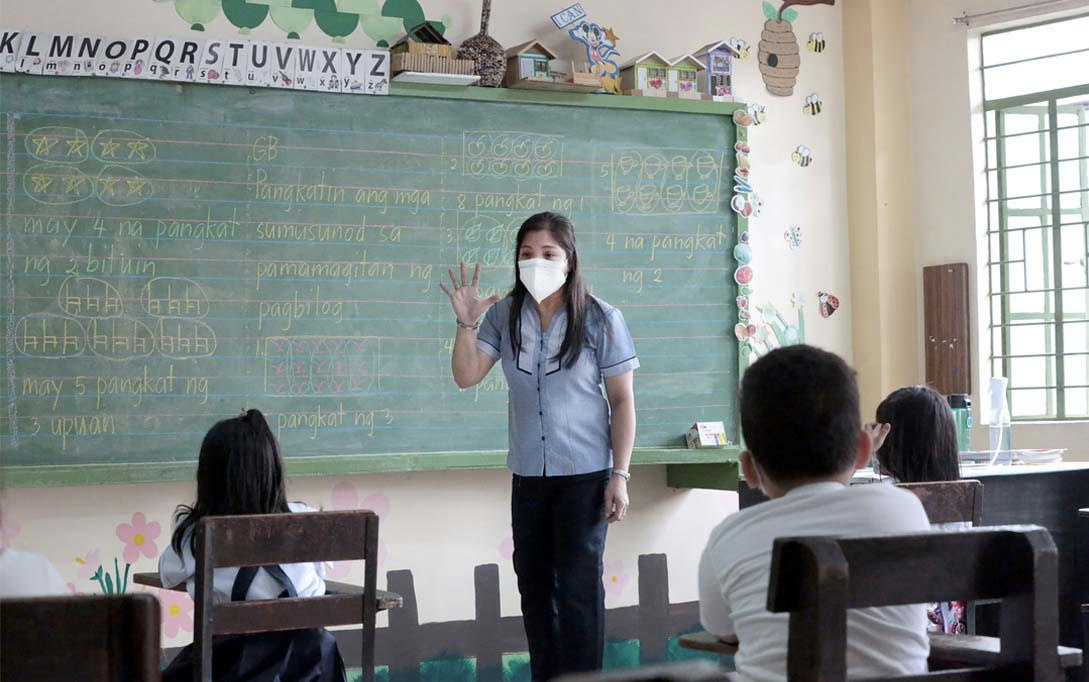 The Department of Education (DepEd) is eyeing the easing of requirements for in-person classes as Metro Manila and other areas shift to a “new normal”..(INQUIRER FILE PHOTO / GRIC C. MONTEGRANDE)

This was how public school teachers described the Department of Education (DepEd) Memorandum No. 29, s. 2022 which required 100 percent onsite work in all DepEd offices in areas under Alert Level 1.

ACT-National Capital Region (NCR) said the DepEd has been silent on the issues that the teachers’ group raised even before the order came out, saying that the department proceeded to implement it amid opposition.

The DepEd, however, said the order was in compliance with Malacañang’s Memorandum Circular No. 96, which said that under Alert Level 1, 100 percent of employees in all government offices should physically report for work.

With DepEd’s Memorandum No. 29, or the Work Arrangements in the DepEd under the Imposition of Alert Level 1 System for COVID-19 Response, the required onsite reporting capacity is 100 percent for all of its offices.

The DepEd said it was an opportunity to improve the implementation of multiple learning delivery modalities, through a more efficient supervision and monitoring of the proper use of learning modules and online media. 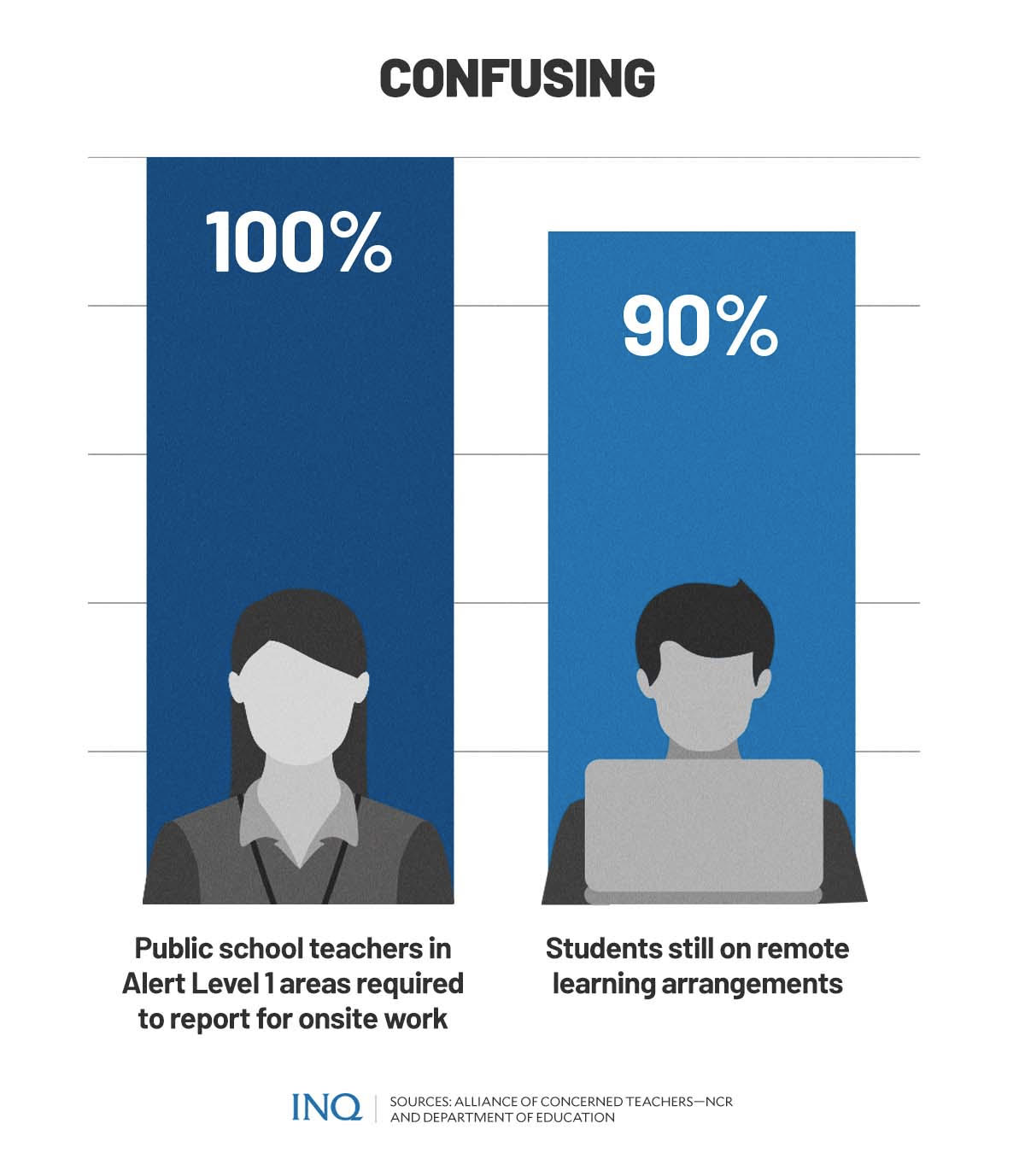 The order, Education Secretary Leonor Briones said, will apply to all teaching and non-teaching personnel in all offices, schools and community learning centers, whether the school is having face-to-face classes or distance learning.

“Remote and flexible work arrangements may be implemented, in accordance with the Civil Service Memorandum Circular No. 18, s. 2020 and DepEd Order No. 11, depending on the prevailing COVID-19 Alert Level,” the order said.

Last April 13, Malacañang and the Inter-Agency Task Force for the Management of Emerging Infectious Diseases said Metro Manila and these areas will still be under the least restrictive Alert Level 1:

But ACT-NCR said DepEd officials failed to understand the situation and needs of public school teachers and generally, the education system, saying that this was the reason that DepEd was “relentlessly” implementing orders like the DepEd Memorandum No. 29. 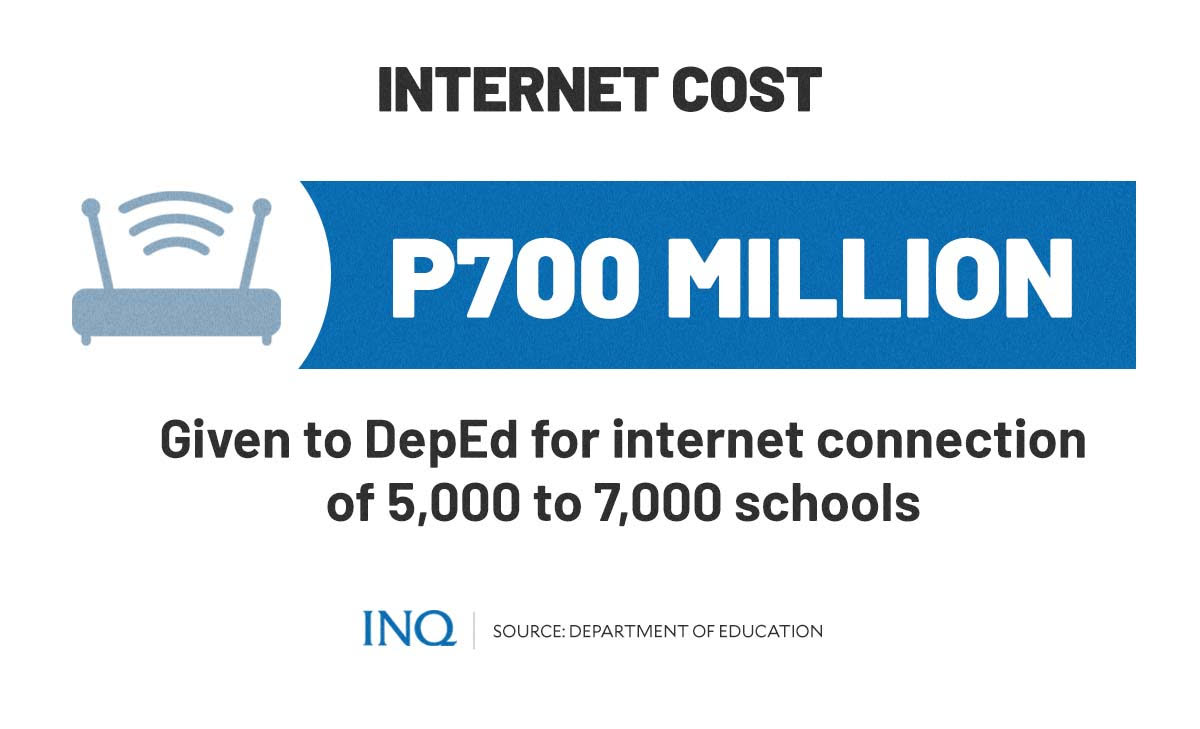 The group said that the department order will only hold back the improvement of the delivery of educational services, especially with the still existing COVID-19 crisis.

ACT-NCR said the department failed to prepare schools to host teachers who are “overwhelmingly still employing remote learning modalities,” stressing that 90 percent of students are still on distance learning.

Last March 22, the DepEd said 9,994 public schools and 212 private schools had been given permission to hold face-to-face classes for basic education.

Likewise, 14,396 public and private schools had been selected for the progressive expansion phase of physical classes, stressing, however, that these schools would have to get permission from the local government. 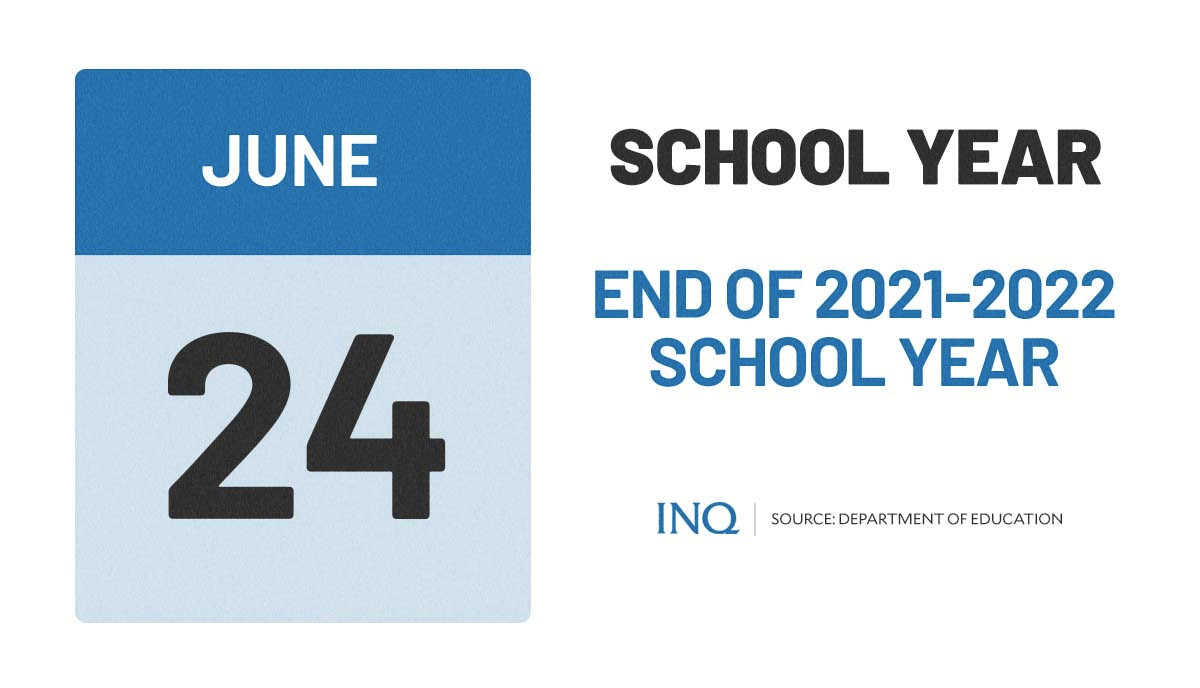 In 2020, the DepEd was given P700 million for the Public Education Network (PEN) Program, which was meant to increase the internet connectivity of 5,000 to 7,000 schools. 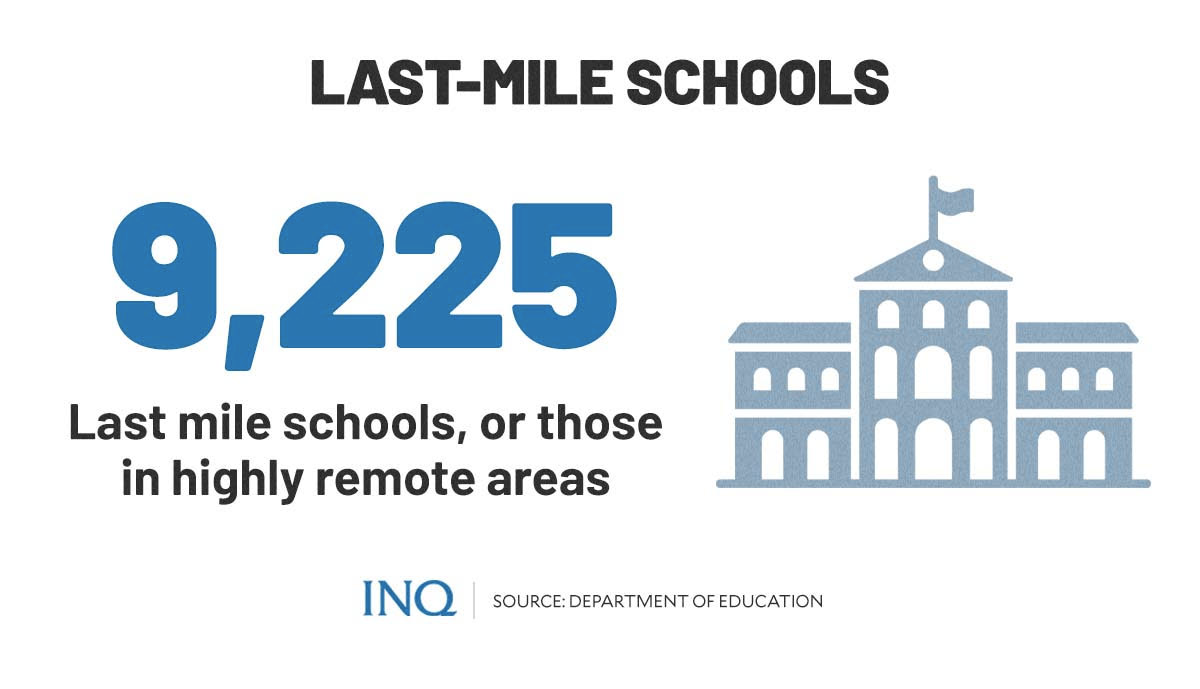 This, as the Philippines has 9,225 “last-mile schools” or those that are located in far-flung or isolated areas. Out of these, the DepEd said 3,000 schools do not even have electricity.

ACT-NCR stressed that 8,106—or 87.6 percent—of 9,254 teacher-respondents in its survey said internet connectivity in their schools is not enough to serve all of those having online classes simultaneously.

It said that while teachers have LGU-provided data allocations which they can use to hold online classes, they reported having “dead spots” within the school premises, forcing several teachers who—all simultaneously holding their own classes—to share small areas with enough cell reception.

“This is what we mean when we say that the blanket DepEd memo will have counterproductive impacts on the already challenging education delivery amid the pandemic,” the ACT-NCR said.

Last year, Briones and then Information and Communications Secretary Gregorio Honasan signed two Memoranda of Agreement “to strengthen the delivery of education through broadcast, connectivity and digital security via the PEN Program”. 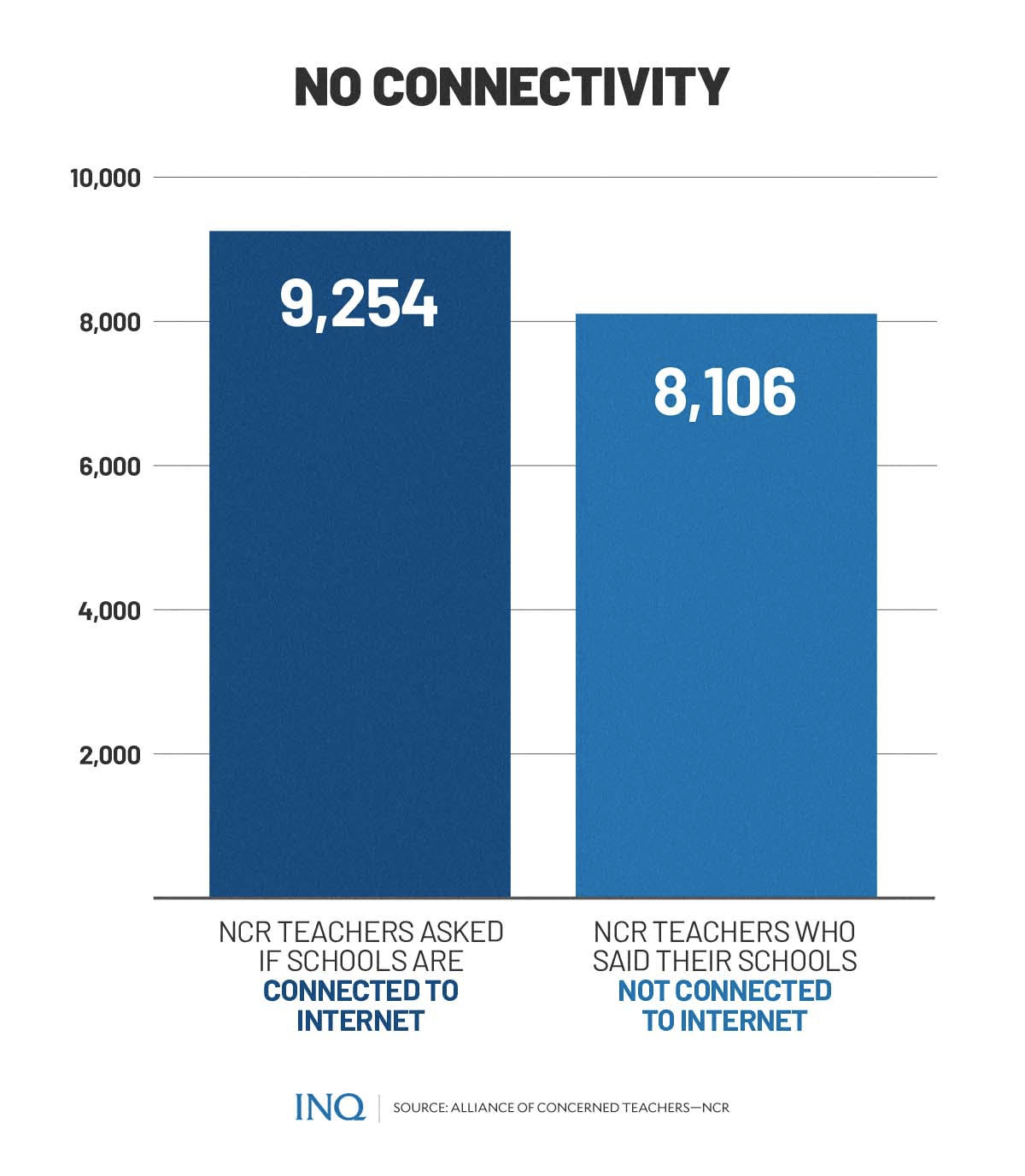 ACT secretary general Raymond Basilio said DepEd’s order is “mechanical and blind obedience to a policy that does not take into consideration the peculiarity of our teachers’ task under blended learning and the situation of schools which are far different from the many government offices.”

He said most public schools don’t have reliable internet connection and enough office equipment to sustain the demands of teachers’ distance learning responsibilities.

Basilio said requiring teachers to report to school daily while their students are at home is unnecessary and unreasonable, especially since their work, by nature, is relatively independent and individualized compared to the more collective nature of office work in other government employees.

“Teachers should come to school for face-to-face classes and other actual activities that need their physical presence such as for physical meetings, seminars, distribution/retrieval of modules and parent-teacher consultation,” he said.

“Our teachers are not against physical reporting per se. For the longest time, we have been asserting for the safe reopening of schools as we see classroom instruction as the best way for our students to learn, especially now that we are experiencing a severe learning crisis,” Basilio stressed.

ACT said that instead of issuing premature orders for 100 percent onsite reporting of teachers, the DepEd should focus on hastening the preparation and providing for the needs of safe school reopening so that teachers and students alike can safely go back to school.