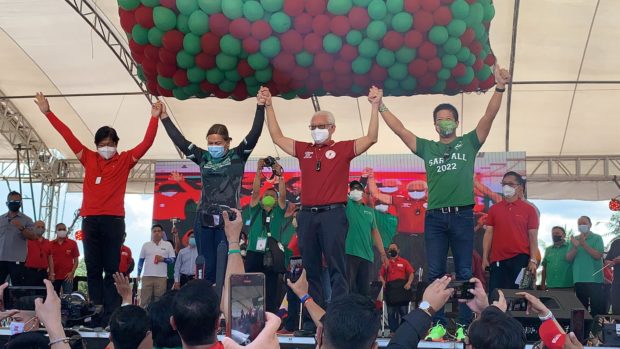 BATANGAS CITY, Philippines — With the campaign period reaching its last stretch, the tandem of Ferdinand “Bongbong” Marcos Jr. and Inday Sara Duterte-Carpio brought back its campaign to the vote-rich Southern Luzon region.

Marcos is set to campaign in Oriental Mindoro and Occidental Mindoro on Wednesday morning, while his running mate Duterte-Carpio will have a meeting with several sectors in Batangas province.

Duterte-Carpio is first set to visit a vaccination center in Batangas City to meet with parents, nurses, and medical frontliners before meeting with the province’s officers and stakeholders in the tourism sector.

After their respective sorties, the Uniteam standard-bearers will then convene for a grand rally in Lipa.

On Thursday, the tandem will visit the province of Laguna.

This is not the first time that the tandem will visit the Laguna, Batangas, and Mindoro provinces — after all, these are some of the most vote-rich provinces in the country.

The Southern Luzon campaign came just two days after the tandem’s visit to Cebu province, the most vote-rich province in the country with over 3.2 million voters.

Asked regarding his confidence that the Marcos-Duterte team will win in the province, Mandanas claimed that the “whole of Batangas” will back the tandem.

Meanwhile, Laguna governor Ramil Hernandez endorsed Duterte-Carpio — with the provincial board even declaring her an adopted daughter of the province. Hernandez, however, has yet to endorse a presidential candidate.