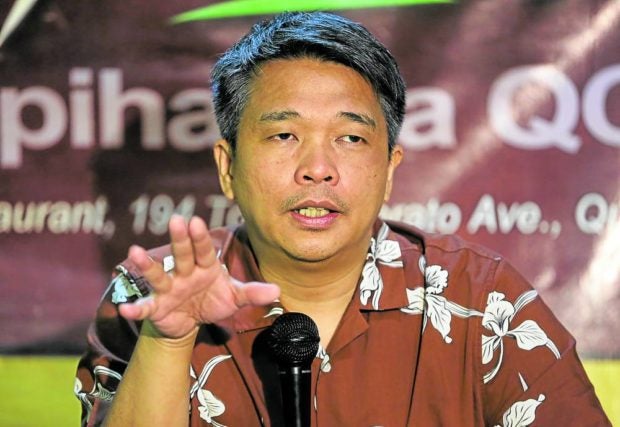 MANILA, Philippines — “It’s a game of chicken and we’re losing,” maritime expert Jay Batongbacal said on Monday after the Department of Energy (DOE) ordered the suspension of oil exploration activities in the West Philippine Sea on April 6.

The order came a month after President Rodrigo Duterte, during a public address, said the country had no choice but to abide by a supposed joint exploration deal with Beijing to avoid conflict, and that someone “from China” had reminded him of this upon learning of other companies’ planned activities in the area.

Duterte added that the same person also warned him that Beijing would send soldiers to the West Philippine Sea should he deploy the military there.

“It’s a signal that China is seriously out to prevent any petroleum exploration and development by the Philippines within its own waters,” Batongbacal, also the director of University of the Philippines Institute for Maritime Affairs and the Law of the Sea, told the Inquirer.

The DOE order effectively stopped “all exploration activities” for Service Contracts 72 and 75—two sites off Palawan province earlier identified by the government as possible areas of joint energy exploration with Beijing—pending a go-signal from the Security, Justice and Peace Coordinating Cluster (SJPCC) which cited “the political, diplomatic and national security implications of any activity in the West Philippine Sea.”

As a result, PXP Energy Corp. and its subsidiary Forum Energy Ltd. — which had been hired by the government to conduct exploration activities — had to declare a force majeure, saying the order prevented them from “performing their obligations.”

It was unclear whether the suspension would be lifted anytime soon. Defense Secretary Delfin Lorenzana, the SJPCC chair, had no comment and referred the Inquirer to the DOE.

Energy Secretary Alfonso Cusi, on the other hand, begged off from commenting on the issue. “Please excuse me [from answering] your question for now. Will answer in due time,” he told the Inquirer in a Viber message.

During a joint military and police command conference on April 6, Mr. Duterte also told the officials present to follow the supposed joint exploration agreement with China. This was the reason the SJPCC was reluctant to approve exploration activities in the West Philippine Sea, a senior security official had told the Inquirer.

“It again demonstrates Duterte’s submission to China’s demands, and that previous statements against China’s actions were only for show,” Batongbacal said.

For retired Supreme Court Justice Antonio Carpio, a West Philippine Sea expert, Mr. Duterte was only allowing himself “to be bullied by China.”

China has been known to intimidate South China Sea claimants conducting energy exploration activities to pressure them into accepting joint development deals, according to critics.

Earlier this month, a China Coast Guard vessel shadowed two ships hired by PXP to conduct a seismic survey at SC 75, just days before the DOE’s issuance of the suspension order. However, the Chinese vessel kept its distance from the two ships and did not bother them.

In 2020, Duterte lifted a moratorium on energy projects in the West Philippine Sea. His predecessor, President Benigno Aquino III, imposed the ban in 2014 due to tensions with China which is claiming the entire South China Sea.

The Philippines and China currently have no official joint exploration agreements, except for a memorandum of understanding (MOU) on joint oil and gas development in 2018 although both parties have yet to reach a consensus up to now.

Forum, which operates SC 72 covering the resource-rich Recto (Reed) Bank, went into negotiations with China National Offshore Oil Corp. (CNOOC) as part of the MOU but nothing was finalized, according to a source familiar with the discussions.

Deleting the two provisions, however, would violate the Constitution and cancel the 2016 arbitral award, the source said.

Batongbacal warned that PXP might be forced to abandon its seven-year service contract with the government that started in 2010 given the circumstances.

“PXP will have to decide whether the investment is worth holding on to or not,” he said.

He added, “If PXP gives up on the contract, it will lose shareholder value in the stock market, which means it’s a loss of investments. Other petroleum companies will see that and may be discouraged from investing in future Philippine petroleum exploration.”

The Philippines, without new indigenous sources of petroleum, would also have to rely on imported liquefied natural gas to sustain power plants supplied by the depleting Malampaya gas field, Batongbacal said.

“This could lead to increasing energy prices because it would be more susceptible to fluctuations in the global energy market, and natural gas is in very high demand now,” he said.