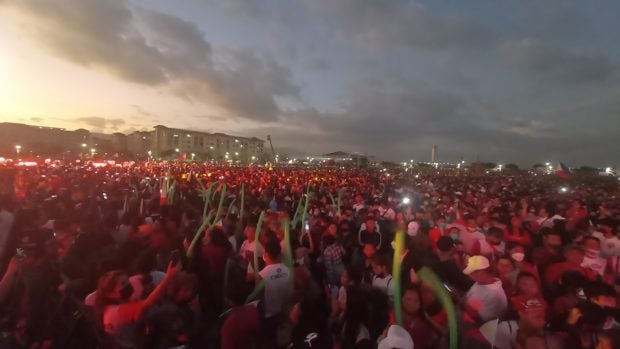 CEBU CITY, Cebu, Philippines — Amid cheering supporters, presidential candidate Ferdinand Marcos Jr. on Monday, April 18, called on Cebuanos to unite and support his bid to improve the country’s economy and standard of living.

Speaking before thousands of people at the Filinvest grounds located at the South Road Properties here in Cebu City, the former senator and son of the late dictator Ferdinand Marcos Sr. reiterated his call for unity among all Filipinos.

“Let us do everything to make our country great. If we achieve that, Filipinos will have work, have money in their pockets, food, can send their children to schools, and make the future bright. The lives of Filipinos will be better compared to the past years,” he said in Filipino during his speech which was interrupted by chants of “BBM, BBM!”

“That’s our aim for the Philippines. Let us continue the bond of unity. We are not adversaries here. We love each other as Filipinos,” he added.

Marcos Jr. hoped that one day, Filipinos will be proud of the country on the world stage despite whatever tragedies or calamities they might encounter.

“Let us continue what we have started here (in Cebu City). Our victory is not just about the elections. It is about bringing the Filipinos together. And if we do that, if we join forces, let us stand up together again,” he said.

Around 200,000 people showed up at the South Road Properties in Cebu City for the grand rally of Marcos Jr. and his running mate Sara Duterte-Carpio on Monday, said Lt Col. Wilbert Parilla, deputy city director for operations.

Different bands entertain the crowd from 2 p.m. on Monday while waiting for Marcos, Duterte-Carpio, and their senatorial slate.

At least 100 policemen were deployed at the venue to maintain peace and order at the grand rally.

Marcos and Duterte-Carpio got the support of both Cebu City Mayor Michael Rama and Cebu Gov. Gwendolyn Garcia.

Cebu province, which comprises 44 towns and six component cities, is the country’s most vote-rich province with 3.2 million voters.

—WITH A REPORT FROM NESTLE SEMILLA