Putin and Maduro burnt as ‘Judas’ in Caracas 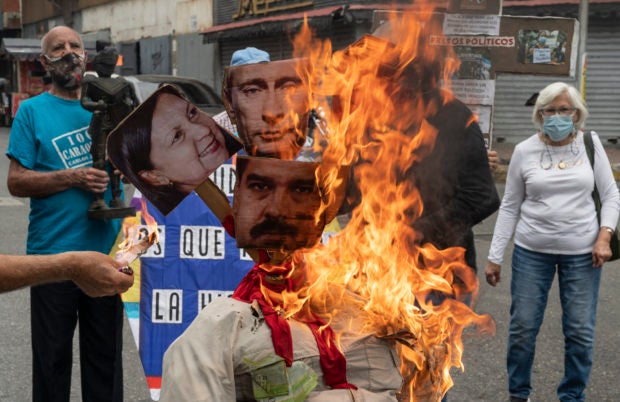 Opponents of the government of Venezuelan President Nicolas Maduro burn a dummy with the images of Maduro (C-Bottom), Russian President Vladimir Putin (C-Top) and Mayor of Caracas Carmen Melendez (L) during the traditional “burning of Judas” within the framework of the celebration of the Holy Week at La Candelaria neighborhood in Caracas, on April 17, 2022. AFP

CARACAS—A four-headed mannequin carrying the faces of Venezuelan President Nicolas Maduro and his Russian counterpart Vladimir Putin was burnt in Caracas on Sunday as part of traditional “burning of Judas” celebrations at Easter.

In Venezuela it is customary on Easter Sunday to burn an effigy that represents Judas, the biblical figure who supposedly betrayed Jesus.

Over the years it has become traditional to give this figure the face of a political leader or a hated person.

In the working class Candelaria neighborhood, the burnt figure was also adorned with the images of Caracas mayor Carmen Melendez and Nestor Reverol, the minister of electric energy, both blamed for the numerous blackouts the city suffers.

The mannequin was christened “the children of Vladimir Putin: Maduro, Melendez and Reverol,” added Rojas.

The four of them were condemned to this fate for being “the reflection of the betrayal of Caracas, Venezuela and the world.”

“We see how Vladimir Putin, as well as unleashing a war with thousands of dead is one of the pillars that props up the dictatorship in Venezuela,” said Rojas, referring to Russia’s invasion of Ukraine.

The effigy was burnt in the same streets where anti-government protesters were killed in 2014.