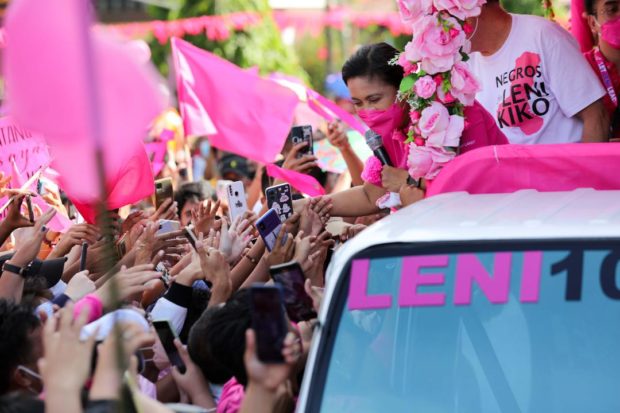 MANILA, Philippines — Presidential candidate Vice President Leni Robredo doesn’t appear to be bothered by the joint Easter Sunday press conference held by her rivals who called for her withdrawal from the May 9 polls while vowing to finish the presidential race.

In a Facebook post, Robredo shared photos of her dinner with farmers from Sumilao, Bukidnon in celebration of Easter. One of her supporters then commented “VP magkano po nawithdraw niyo today sa ATM?” (VP, how much did you withdraw today from the ATM) alluding to the said joint conference held the same day where Manila Mayor Francisco “Isko Moreno” Domagoso urged Robredo to withdraw her candidacy.

The said conference was held jointly by presidential bets Moreno, Senator Panfilo Lacson and former Defense Secretary Norberto Gonzales. Senator Manny Pacquiao was also supposed to attend the conference but did not make it in time.

After the conference, thousands of netizens then poked fun at the withdrawal calls.

Coz you're in good hands with VP Leni! 🎶👐💪💗 pic.twitter.com/0xkquqCDCG

‘Who benefits from such theatrics?

“From the start, it has been the prerogative of every candidate to continue till the end, the same as it is the choice of a candidate to disregard surveys, rally attendance, endorsements, or any other conventional measure of support,” said Gutierrez.

“We wish every candidate who decides to push through to the end, only the best,” he added.

However, Gutierrez questioned whether the conference, which was held in the lavish Manila Peninsula hotel in Makati City, was necessary.

“Must this assertion be made through bluster and falsehood? Who benefits from such theatrics? What is best for the Filipino people? Perhaps, silence would have had more depth; at the very least, it would exhibit less self-entitlement, fragility, and toxicity,” said Gutierrez.