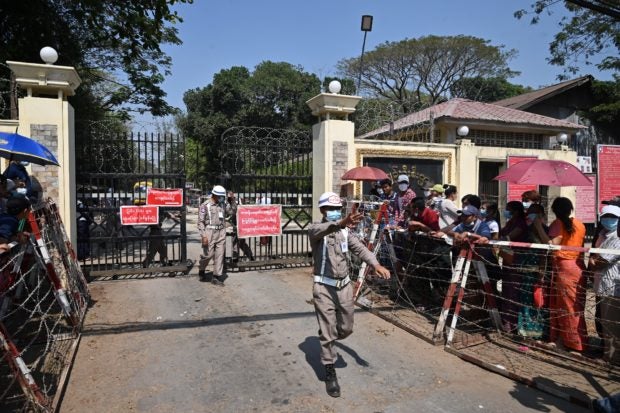 Prison officials stand prepare for the release of prisoners outside of the Insein prison in Yangon on February 12, 2022. AFP FILE PHOTO

YANGON—Myanmar’s junta will release over 1,600 prisoners from jails across the country on Sunday to mark the Buddhist new year, it said, without specifying whether those being pardoned were protesters or common criminals.

The Southeast Asian country has been in turmoil since the military’s ouster of Aung San Suu Kyi’s government last year, which sparked huge protests and a deadly crackdown.

Some 1,619 prisoners, including 42 foreigners had been “pardoned” and will be released to mark the new year, according to an announcement carried by state TV Sunday morning.

It remains unclear whether anti-junta protesters or journalists jailed covering the coup will be among those freed.

There was also no mention of Australian academic Sean Turnell, a former advisor to ousted leader Aung San Suu Kyi, who was arrested shortly after the coup.

He is currently on trial for allegedly breaching the official secrets act, which carries a maximum 14-year jail sentence.

The exact details of his alleged offence have not been made public, though state television has said he had access to “secret state financial information” and had tried to flee the country.

Myanmar typically grants an annual amnesty to thousands of prisoners to mark its traditional Buddhist New Year holiday — which in previous years have been joyous affairs with city-wide water fights.

But this year, with the military continuing its bloody crackdown on dissent, the streets in many major cities have been silent as people protest junta rule.

A year after Myanmar’s coup, families of detainees search for answers