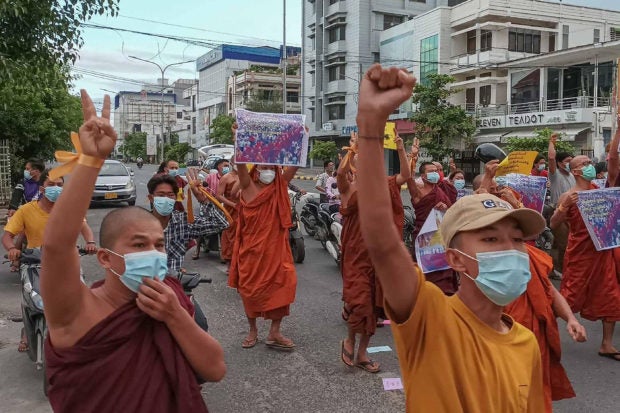 Ppro-democracy Buddhist monks and other supporters take part in a demonstration against the junta in Mandalay on September 25, 2021, marking the 14-year anniversary of the 2007 Saffron revolution. (Photo by STR / AFP)

BANGKOK, Thailand –  Myanmar’s junta has re-arrested more than 100 anti-coup protesters freed in a recent amnesty, according to a local monitoring group that tracks detentions and killings in the country.

The Southeast Asian nation has been in chaos since the February coup, with more than 1,100 killed in a crackdown on dissent and over 8,000 arrested, according to the Assistance Association for Political Prisoners (AAPP).

On Monday, the military announced it would free more than 5,000 people over the three-day Buddhist Thadingyut festival, sending anxious families rushing to jails in the hope of being reunited with their loved ones.

The true number of those released across the country is difficult to verify, and many were freed only after signing documents promising not to re-offend.

At least 110 of those pardoned have since been re-arrested, according to the AAPP.

“Some were… re-arrested as soon as they arrived home,” it said in a statement Thursday.

“Some others were told they were on the released list, taken to the jail entrance, only to be taken back to prison in the face of additional charges.”

Myanmar authorities released more than 2,000 anti-coup protesters from prisons across the country in June, including journalists critical of the military government.

Those still in custody include the American journalist Danny Fenster, who has been held since being arrested on May 24.

The most recent amnesty comes with the military under increasing pressure to engage with its opponents, nearly nine months after seizing power.

Last week the Association of Southeast Asian Nations (ASEAN) decided to exclude junta leader Min Aung Hlaing from an upcoming summit of the 10-country bloc over doubts about his commitment to defusing the bloody crisis.

Chollet was speaking during a tour to the region to consult with US allies on further ways to put pressure on the junta.

The coup snuffed out the country’s short-lived experiment with democracy, with civilian leader Aung San Suu Kyi now facing a raft of charges in a junta court that could see her jailed for decades.