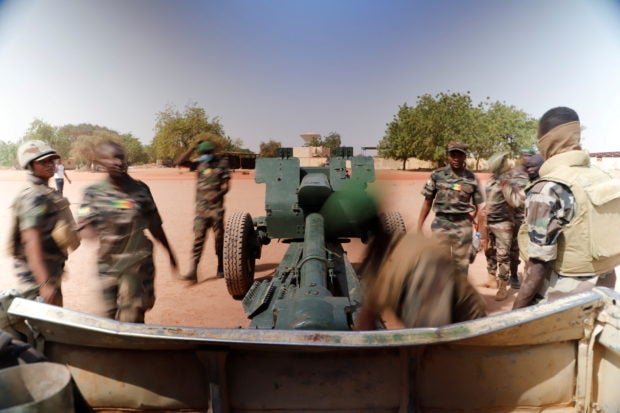 FILE PHOTO: Malian soldiers of the 614th Artillery Battery are pictured during a training session on a D-30 howitzer with the European Union Training Mission (EUTM), to fight jihadists, in the camp of Sevare, Mopti region, in Mali March 25, 2021. REUTERS/Paul Lorgerie File Photo/File Photo

BAMAKO, Mali — It was market day in the town of Moura in central Mali when Malian troops backed by white mercenaries descended in helicopters and opened fire on bewildered residents, according to witnesses’ accounts.

Stall-owner Amadou saw the soldiers fan out across town on the morning of March 27, and ran home. They arrested him hours later and took him to a riverbank on the outskirts of town, where thousands of men sat with their hands tied.

Over the next four days, the men stayed in the blazing sun with little food or water and watched as soldiers gradually took groups aside, led them to the lip of a mass grave and shot them, Amadou and two other witnesses told Reuters.

“It was unimaginable,” he said, overcome with exhaustion and emotion. “They came, they took 15, 20 people and lined them up. They made them kneel down and shot them.”

The witnesses gave their accounts in the Malian capital Bamako.

Most of the soldiers who killed civilians were Malian, they said. But dozens of white men in army fatigues who spoke what the residents believed was Russian, were actively involved, they said. French is widely spoken in Mali, but the government soldiers and the white men communicated in sign language as they did not speak the same language.

The white men were the first to get out of the helicopters and open fire on fleeing residents, four onlookers said.

Reuters could not independently verify their accounts or visit Moura, a town of 10,000 people under the control of an Islamist group linked to al Qaeda.

Mali’s army said it killed 203 militants during a military operation in Moura. It denies reports of executions and has not responded to a request by Reuters for comment.

Wagner Group, a Russian private military contractor that recently started working with the Malian army, could not be reached for comment.

The reports have raised concern that the presence of Wagner will further destabilize Mali, an arid and poor country that is home to groups linked to Islamic State and al Qaeda that have killed thousands in Mali and neighboring Burkina Faso and Niger.

The European Union has imposed sanctions on the group, which it says works on the Kremlin’s behalf. Moscow denies ties.

Moura, in the flood plain of the Niger River, has been outside government control for years, residents said.

Militants impose Sharia law and their own tax system. They pressure men to cut their trousers short and keep their beards long. They visit the town to buy food but live in the bush, the residents said.

Some came to the market on March 27, they told Reuters. Human Rights Watch said the soldiers clashed with armed militants in the town that day.

At the riverbank, soldiers inspected the men’s trigger fingers and shoulders for signs that they had been firing or carrying guns, Amadou said.

Soldiers seemed to select people for execution based on their ethnicity and clothing, witnesses said.

Fulani herders, some of whom have been known to join Islamist groups, were singled out, witnesses said. Those from the Bobo and Bella groups were ordered to dig the graves.

A soldier asked one man with a beard and cut-off trousers if he needed to urinate. When he said no, the soldier ordered him to stand up, said one witness, who asked to remain anonymous.

“The soldier shot him in the back, then approached him and shot him twice in the head.”

The white troops departed after four days, but the Malian soldiers stayed on briefly. One gave a speech apologizing for the killings, Amadou and two other witnesses said.

Mali’s military police has opened an investigation, as has the United Nations, though the U.N. said that it has not been granted access to Moura.

The Malian army on April 5 denied the allegations and said it had conducted a professional operation to target Islamist militants in the town.

“The total control of the locality allowed for searching, identifying, and sorting out terrorists disguised and concealed among the civilian population,” the army said in a statement.

Both Mali, whose government took power in a 2021 military coup, and the Kremlin have previously said the Russian forces there are not mercenaries but trainers helping local troops with equipment bought from Russia.

France, Mali’s former colonizer, has had thousands of troops battling militants in the country for nearly a decade but is pulling out due to frayed relations with the military government, including over the arrival of Russian contractors.