KYIV — The presidents of Poland, Lithuania, Latvia and Estonia met President Volodymyr Zelensky in Kyiv on Wednesday and called for increased military support for Ukraine and for Russia to be held accountable for the actions of its troops on the ground.

European politicians have flocked by train to the Ukrainian capital since Russian forces withdrew from the country’s North in the face of strong Ukrainian resistance earlier this month.

Before meeting Zelensky, the four presidents visited areas in Kyiv region where hundreds of slain civilians have been discovered after the Russian withdrawal. Moscow has denied responsibility and dismissed allegations its troops committed war crimes there as fake news. 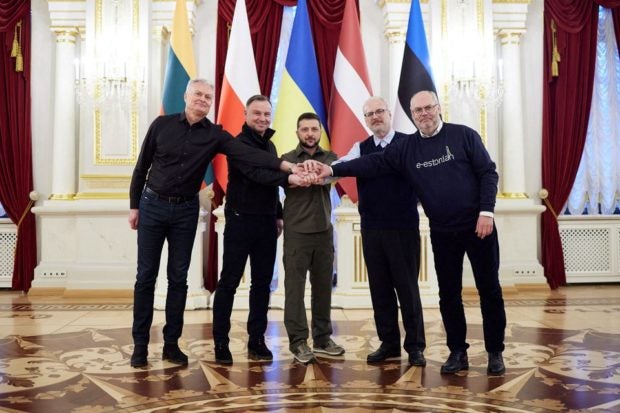 “This is not war, this is terrorism,” Polish President Andrzej Duda said at a news conference in Kyiv, flanked by Zelensky and the Baltic states’ presidents.

“We’re not just talking about the soldiers who committed those crimes, but those who issued orders – all of them should be brought to justice,” he said.

Russia has denied that its forces targeted civilians and has said Ukrainian and Western allegations of war crimes are fabricated.

The wish for Russia to be held accountable was echoed by the other visiting presidents, who also said they planned to push the international community to ramp up military support for Ukraine as it readies for an intensified offensive by Russia in the East.

“It is our duty to help Ukraine with all kinds of weapons,” said Latvian President Egils Levits. 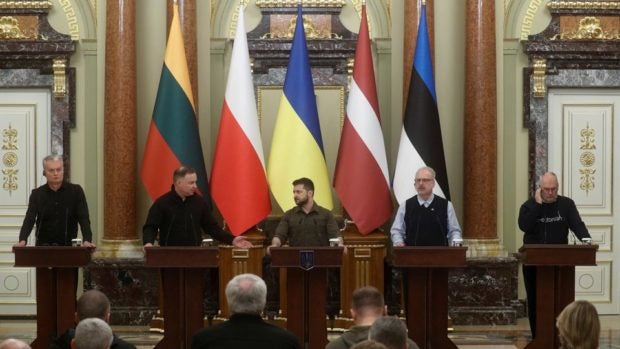 His Lithuanian counterpart Gitanas Nauseda said, “The future of Ukraine will be decided on the battlefield … Ukraine must win.”

Putin sent his troops into Ukraine on Feb. 24 on what he calls a “special military operation” to demilitarise and “denazify” the country. Ukraine and its allies say Putin launched an unprovoked war of aggression.

“President Putin must lose this war or there will be no peace in Europe,” said Estonian President Alar Karis.

German Chancellor Olaf Scholz has expressed “irritation” after the country’s President Frank-Walter Steinmeier cancelled a visit to Kyiv at the same time. He had said it was intended “to send a strong signal of European solidarity with Ukraine”. Scholz said Kyiv did not want Steinmeier to visit.

But at Wednesday’s news conference, Zelensky said he had not been officially approached by Steinmeier or his office regarding a visit.

Speaking about his visitors in Kyiv, Zelensky said he was grateful they had stood “shoulder to shoulder with Ukraine.”

“Those four leaders of the four nations are always protecting us, always standing up for us,” he said.