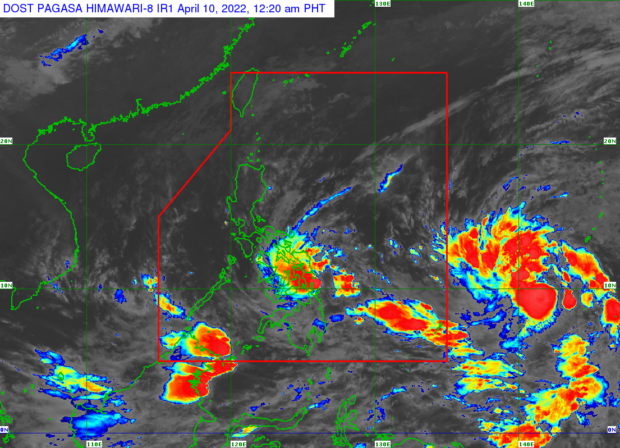 MANILA, Philippines — The weather bureau on Saturday said it was not discounting the possibility of a Fujiwhara effect, or a binary interaction between two cyclones close to one another, should the Tropical Storm Malakas enter the Philippine area of responsibility (PAR), along with the Tropical Depression Agaton currently inside the country.

But for a Fujiwhara effect to be pulled off, the two interacting weather disturbances must be categorized first as tropical storms.

For now, Agaton is still a tropical depression while Malakas, which is outside PAR in the meantime, is already a tropical storm, according to the Philippine Atmospheric, Geophysical and Astronomical Services Administration (Pagasa).

“We are not ruling out the possibility [of a Fujiwhara effect],” Christopher Perez, senior weather specialist of Pagasa, said at a virtual press briefing. “Usually, the Fujiwhara effect manifests once the two tropical storms are at a distance of almost 1,500 kilometers.”

The tendency for a Fujiwhara effect between Agaton and Malakas was for the stronger tropical storm to influence the movement of the weaker weather disturbance, in this case Agaton.

Another scenario that Perez said could happen was for Malakas, which is stronger due to its current category, to completely absorb or dissolve Agaton.

“But there is one scenario as well that Agaton would slowly move exiting the country once the stronger tropical storm enters,” he pointed out.

According to the Hong Kong Observatory, the Fujiwhara “applies to the interaction of two tropical cyclones” and in general, the two tropical cyclones “may start to affect each other” once the distance between them is around 12 latitude degrees or about 1,350 kilometers.

In its 5 p.m. bulletin on Saturday, the Pagasa said Agaton was spotted 130 km east southeast of Guiuan, Eastern Samar, packing 55 km per hour of maximum sustained winds and gustiness of 70 kph.

Signal No. 1 has been raised in Eastern Samar, Dinagat Islands, and Siargao and Bucas Grande Islands.

Perez said there was still a possibility for Agaton to make landfall in Guiuan town.

As for Malakas, it was last estimated at 1,965 km east of Mindanao with maximum sustained winds of 75 kph and gusts of up to 90 kph, according to Pagasa.

Malakas is moving north-northwestward at 10 kph.