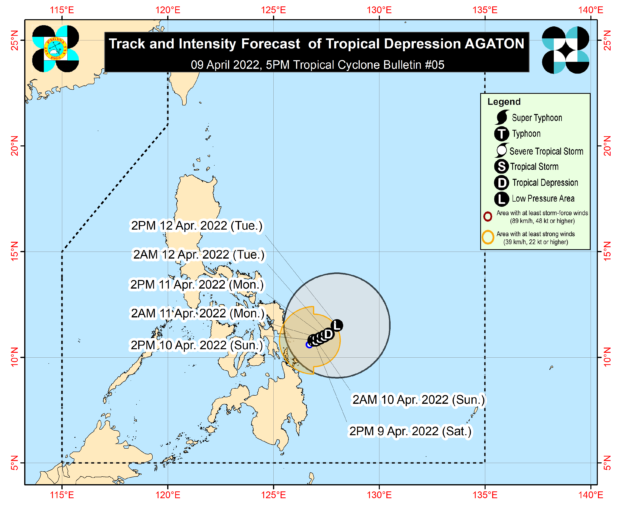 MANILA, Philippines — Tropical depression Agaton is forecast to intensify into a tropical storm in the next 24 hours, the Philippine Atmospheric, Geophysical and Astronomical Services Administration (Pagasa) said in its 11 a.m. bulletin on Saturday.

According to Pagasa, the center of Agaton was last located 125 kilometers east southeast of Guiuan, Eastern Samar. The tropical depression packs maximum sustained winds of 45 kilometers per hour near the center and gustiness of up to 55 kph.

“‘Agaton’ is forecast to intensify into a tropical storm in the next 24 hours. By Tuesday, the disturbance may weaken into tropical depression and may degenerate into a remnant low by late Tuesday or early Wednesday as ‘Malakas’ begins to assimilate its circulation,” Pagasa said.

Malakas is the international name of the incoming tropical cyclone outside the Philippine area of responsibility.

This Saturday until Monday, Agaton is forecast to remain almost stationary or move slowly as it meanders over the waters east of Eastern Visayas, according to the state weather bureau.

“Due to the expected erratic nature of its movement, a landfall over the coast of Eastern Samar is possible. However, the tropical depression may begin turning generally northeastward on Monday afternoon or Tuesday as it interacts with the incoming tropical cyclone,” Pagasa also said.

Tropical Cyclone Wind Signal No. 1 remains hoisted over Eastern Samar, Dinagat Islands, Siargao and Bucas Grande Islands. Under TCWS No. 1, strong winds are prevailing or expected within the next 36 hours.

READ: Signal No. 1 in 4 areas in Visayas, Mindanao as Tropical Depression Agaton looms