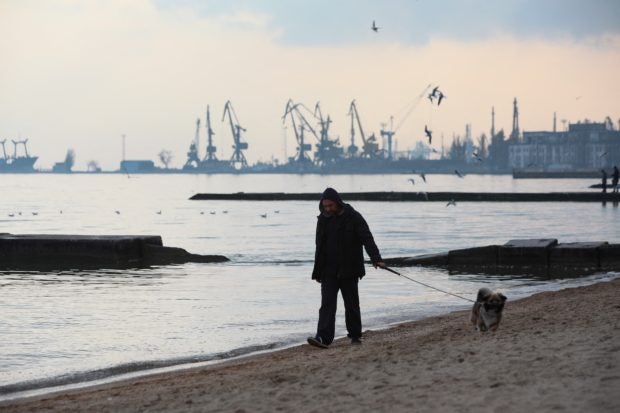 A man walks a dog along a coast of the Sea of Azov in Ukraine’s industrial port city of Mariupol on February 23, 2022. Mariupol lies on the edge of the front line separating government-controlled territory from that overseen by Russian-backed separatists in the rebel stronghold Donetsk. (AFP)

GENEVA, Switzerland  – Two UN agencies on Friday called for “urgent action” to help and protect around 1,000 sailors on trading ships stranded in Ukrainian ports and waters since Russia’s invasion of Ukraine.

They sent a letter to the UN High Commissioner for Refugees (UNHCR), the International Committee of the Red Cross and Doctors Without Borders asking them to “take urgent action” to help supply the ships.

“As well as the dangers arising from bombardment, many of the ships concerned now lack food, fuel, fresh water and other vital supplies,” according to the appeal.

“The situation of the seafarers from many countries is becoming increasingly untenable as a result, presenting grave risks to their health and well-being,” it said.

The IOM said at least 1,000 sailors are stranded, including in the besieged port of Mariupol, and on ships in the Azov Sea.

In March, the ILO’s governing body called on the Russia to “immediately and unconditionally cease its aggression” against Ukraine, which it invaded on February 24.