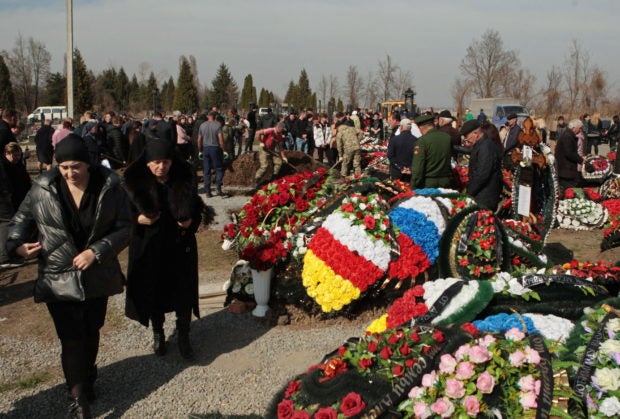 Mourners attend a funeral of Russian service members killed during Ukraine-Russia conflict, at a cemetery in Vladikavkaz, Russia April 8, 2022. (REUTERS)

VLADIKAVKAZ, Russia  – Russian families buried relatives killed in Ukraine with automatic gun salutes and military brass bands on Friday, a day after the Kremlin admitted for the first time that it had lost significant numbers of troops.

Russia sent tens of thousands of soldiers into Ukraine on Feb. 24 on what it calls a “special operation”. Kremlin spokesman Dmitry Peskov said on Thursday that the losses were “a huge tragedy for us.”

In the southern garrison town of Vladikavkaz, near the Caucasus mountains, relatives gathered for the funeral of Vitaly Dyadyushko, one of two soldiers buried on Friday in the town’s Vostochnoe cemetery.

One weeping woman dressed in black kissed the face of the soldier, who lay in an open casket, flanked by soldiers in dress uniform holding rifles. A Russian Orthodox priest waved incense over the coffin.

Dyadyushko, from the nearby settlement of Arkhonskaya, left behind four sisters and a mother, said local leader Alexander Kusey.

“He was from a large family, and he was the only one who provided for it. I don’t know how the girls will do without him now, he helped a lot,” he said. “He was not married, he did not have a chance, he was young, very young. It’s a shame when the young pass away before their time.”

As the coffin was lowered into the ground, a military brass band played the national anthem and an honour guard fired a salute using automatic weapons.

Shortly afterwards, mourners gathered for another funeral, that of 41-year-old Ruslan Kozayev. One elderly woman, in tears, gently touched his face.

Elsewhere in the cemetery, more than 20 fresh graves for soldiers who died in Ukraine were visible.