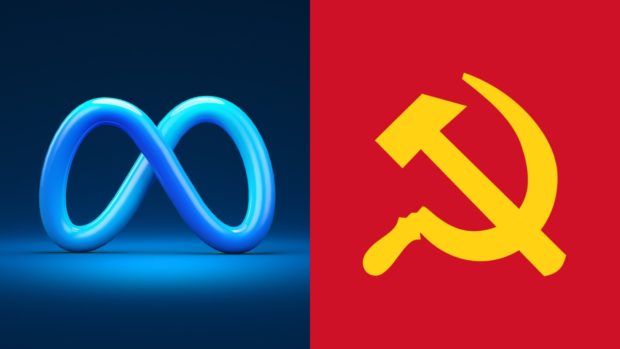 Logo of Meta and the New People’s Army.

MANILA, Philippines — The Communist Party of the Philippines (CPP) has chided Meta for allegedly being “hypocritical” after its armed wing’s Facebook accounts were taken down, saying that the social media company ironically allows red-tagging and pro-violence posts.

In a message to INQUIRER.net on Thursday, a CPP spokesperson said that it is hypocritical of Meta to take down a network of accounts belonging to rebel group New People’s Army (NPA), when it allowed calls for violence and death to proliferate over Facebook in light of Russia’s invasion of Ukraine.

“I think Facebook is utterly hypocritical when it took down the accounts related to the NPA, when it recently made a decision to allow calls for violence and death in Ukraine against Russia, even those accounts related to, promoting or ‘liking’ the views of pro-US neo-Nazi groups such as the Azov Battalion which have been involved in the rape and torture of civilians in Ukraine,” CPP’s Marco Valbuena said.

Such a decision is arbitrary, CPP said, as it supposedly censors the people’s freedom of expression.

“Facebook is exercising arbitrary powers to censor people’s freedom of expression, especially those who fight fascism and those who are against the interests of US imperialism,” Valbuena claimed.

“It bans the NPA on the pretext banning ‘hate speech’ but continues to allow the NTF-Elcac, AFP units and its network of trolls to red-tag and foment hate against the democratic forces,” he added.

Meta earlier announced that a network of groups and pages belonging to NPA have been taken down, for violating their community standards regarding the posting of content encouraging violence.

The social media company’s move was made in the pretext of preparations for the upcoming 2022 general elections, as it gears up for a possible deluge of misinformation, hate speech, misleading and harmful content on its platforms like Facebook and Instagram.

But CPP claimed that Meta’s decision means that revolutionary forces waging a guerrilla war in the countryside would have no voice.

“Facebook is shutting down all doors for the revolutionary forces in the Philippines to express their opinion. Even sharing a link to the CPP’s website is banned and people face the possibility of being banned if they do so,” Valbuena said.

NPA has been waging war against the government for over five decades now, starting from the time of former president Ferdinand Marcos’ martial law regime.  It has since developed into an armed force calling for changes in society, from land reforms and fair labor practices.

It appeared that peace talks would prosper under President Rodrigo Duterte’s term, considering his close relationship with some key Communist Party of the Philippines personalities like founder Jose Maria Sison, who was his former professor.

However, mistrust between the two sides — with the government claiming that rebels are still doing ambushes despite a previous ceasefire order — led to the failure of discussions.

No ceasefire with communist rebels ‘ever again under my term’ – Duterte