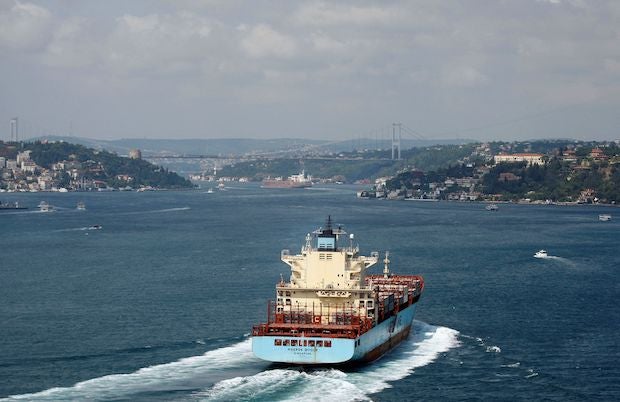 An oil tanker passes through the Bosphorus to the Black Sea in Istanbul July 20, 2012. REUTERS FILE PHOTO

RUMELIFENERI, Turkey—Turkish fisherman Sahin Afsut fears the worst: hitting a mine and “disappearing underwater in the blink of an eye”.

Like many fishermen in Rumelifeneri, a village set on the rocks of the Bosphorus in northern Istanbul, Afsut and his team remain in port since the discovery of a drifting mine last month in the Black Sea.

Fears grew after a second mine was found on March 28, which could have come from Ukraine where Russia launched an invasion in February.

A third stray mine was found Wednesday in the Black Sea off the town of Kefken in northwestern Turkey.

Turkish authorities fear an accident and believe the mines became unmoored from the Ukrainian coast during storms.

“If you hit (a mine), you’re finished,” says Afsut, wearing a grey cap in front of his small trawler from which he usually catches whiting, red mullet and anchovies.

He did not see the first mine two kilometres (1.2 miles) offshore, first discovered by a local fisherman but several others described the scene.

“It was large, like half a barrel. We watched from above there, the (special Turkish navy) units neutralized it,” says 55-year-old Ahmet Tarlaci who has been a fisherman for 43 years.

The Turkish navy warned five days before the first was found on March 26 of the risk of mines coming from Ukrainian waters.

But “the mines arrived quickly, even the Turkish armed forces were surprised,” Tarlaci says.

The Russian defense ministry last week said 420 mines — 370 mines of them in the Black Sea — were placed by Ukraine to protect its coast but around 10 had broken off.

At Rumelifeneri port, where around 100 boats, from small fishing boats to 40-meter (131-foot) trawler boats were waiting Friday, “90 percent of people that we know have stopped” going out to sea, says fisherman Sefki Deniz, 42.

Turkish officials have banned fishing at night, and with the price of diesel reaching spectacular heights, many fishermen decided to end the fishing season three weeks ahead of time.

“We already have financial losses, there shouldn’t be any human losses,” says Deniz, wearing plastic boots and a blue fleece.

The fisherman regrets the little information provided by officials who say they cannot reveal how many mines there are, where they came from or how dangerous they may be.

“For the time being, (the mines) are not a problem, but we won’t let our guard down,” Turkish President Recep Tayyip Erdogan said Friday.

“They speak now of 10 mines and what if the others wander off? The Black Sea is not a large sea, it’s like a lake,” says Deniz, despite 24-hour searches by minehunters in the area.

“Across from us, there is Ukraine, Russia: if the wind blows violently from the north, it’s only a question of time” before the mines arrive in Turkey’s waters, fears fishing captain Saban Ucar, 32.

The 30-40 meter (98-foot to 131-foot) fishing boats “have radars, sonars… but the 9-10 meter boats only have binoculars,” he says from a building overlooking the port.

Ucar was not born at the time, but the memory is still vivid in the village of two accidents in the 1980s caused by mines dating back to World War II.

“There was one that exploded at the port in 1983, five people from the village died. And in 1989, it happened at sea while lifting a net, the mine exploded and so did the boat: four people died.

“We never found their bodies,” says Deniz, one of the veterans at the port.

The fisherman now fears a mine will be able to make its way to the Bosphorus Strait used by 38,500 ships last year.

US announces extra $100 million in military aid to Ukraine