newsinfo / Headlines
Headlines
More than 4,000 jeepneys back on roads 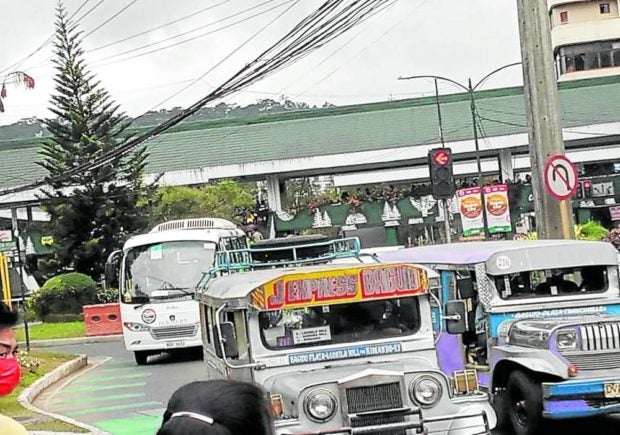 KING OF ROAD | Conventional jeepneys ply the main thoroughfares in Baguio City in this photo taken on Monday. Jeepney operators are given by the government until the middle of 2022 to consolidate and convert their public utility vehicles into modern environmentally friendly urban buses. But transport regulators are being asked to postpone the deadline because of the pandemic and high fuel prices driven by the Russian invasion of Ukraine. (File photo by ALLAN MACATUNO / Inquirer Northern Luzon)

MANILA, Philippines — While they understand the reason behind the suspended distribution of the fuel subsidy, a transport group on Tuesday once again urged the government to ease the requirements for its release upon the lifting of the ban.

The Land Transportation Franchising and Regulatory Board (LTFRB) was forced to halt the distribution of the financial assistance because of the Commission on Elections’ (Comelec) public spending ban. The poll body is expected to act on the exemption sought by the LTFRB on Thursday.

The Federation of Jeepney Operators and Drivers Association of the Philippines (Fejodap) said the suspension of the subsidy’s distribution would adversely affect its drivers, as many members had yet to get the much-awaited government assistance amid high fuel prices.

“We understand since it is part of the process and patience is what we need for now,” Fejodap national president Ricardo Rebaño told the Inquirer. “But this will of course impact us, as many are still waiting for their subsidies.”

By his estimate, only around 30 to 40 percent of Fejodap members have been able to claim the financial assistance from the government, amounting to P6,500 per driver and operator of public utility vehicles (PUVs).

Rebaño added that they were also hopeful that once the ban was lifted, the government would have eased the requirements for its release.

The president of the transport group Pasang Masda, meanwhile, said that the Department of Transportation (DOTr) “had been doing the necessary follow-up” for the fuel subsidy’s exemption from the election spending ban.

“We understand because there’s a Comelec ban. But, as you know, the DOTr never had any shortcomings on this matter,” Pasang Masda president Robert Martin said in an interview.

Martin, however, emphasized that their group would push through with their petition seeking to raise the minimum fare in public jeepneys to P14.

After two years, traditional and modern jeepneys, as well as UV Express Service vehicles, have been allowed by the LTFRB to resume plying their routes on Commonwealth Avenue this week.

Maria Kristina Cassion, executive director of the LTFRB, said that a memorandum circular on the reopening of routes on one of Quezon City’s busiest thoroughfares would soon be posted on the agency’s official website.

In an announcement sent to reporters that was also posted on its Facebook page late Monday afternoon, the LTFRB said that the reopening of routes on the 12-kilometer-long Commonwealth Avenue covered 158 modern public utility jeepneys (PUJs) with six routes; 4,135 traditional PUJs with 76 routes; 19 modern UV Express Service vehicles with one route; and 2,783 traditional UV Express Service vehicles with 20 routes.

According to LTFRB, the reopening of the routes would provide a solution to the lack of public transportation in the area. Since the start of the COVID-19 pandemic in the country two years ago, only passenger buses have been allowed to ply Commonwealth Avenue, according to Cassion.