Crowds at Robredo rallies not an ‘echo chamber’ – spokesperson 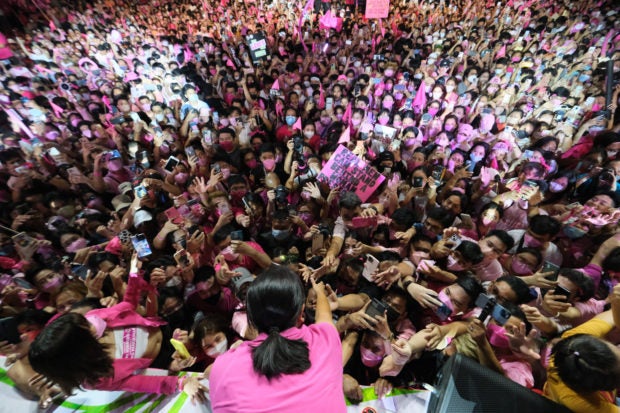 MANILA, Philippines — The huge crowds drawn by Vice President Leni Robredo during her presidential campaign rallies do not represent an “echo chamber,” her spokesperson, lawyer Barry Gutierrez, said on Tuesday.

Gutierrez was asked in an interview with ABS-CBN News Channel’s “Dateline” whether those crowds were just composed of the same people sharing the same beliefs with no exposure to other viewpoints — an echo chamber.

“I don’t believe that because — if you were just talking about Metro Manila, then maybe,” Gutierrez said. “But you’re talking about a number of provinces.”

He then pointed out that Robredo, along with her running mate, Sen. Francis Pangilinan, had campaigned in several places in the three main regions of the country — Luzon, the Visayas, and Mindanao.

“So this is not a case of 40,000 people flying everywhere. This is a case of people wherever the vice president’s going, showing their support, coming out to show that support physically, and actually doing much more than just going to rallies,” Gutierrez said.

Proof of the huge support Robredo has been getting, Gutierrez said, is the large groups that have decided to campaign house to house to ensure that people who were not yet Robredo supporters would hear about her platform.

“Just several days ago, we had a grand launch of the house-to-house campaign, and you could see ordinary people coordinating with surrogates and celebrity supporters going house to house, doing what it takes to actually bring the numbers up,” Gutierrez said.

“So, I don’t think that this is a case of just looking at the numbers of people who attend the rallies. You have to look at the entire people’s campaign in its totality,” he added.

Also present at this interview was Lito Banayo, former chairman of the Manila Economic and Cultural Office in Taiwan, who is now the campaign manager of Manila Mayor Isko Moreno.

At one point, Banayo said Moreno preferred town hall meetings to “mammoth” rallies. Not only were they less expensive but they also brought the candidate closer to the voters.

But Gutierrez clarified that they did not expect to attract big crowds as the rallies were organized by volunteers.

“Wel,l to begin with, we never really wanted big rallies anyways. It’s the big rallies that came to us,” he said. “We don’t believe in bussing people either. We’ve never done that. It’s the people who have actually shown up wherever the vice president has gone.”

“So, the fact that in the last few weeks the intensity of the emotions and the buy-in of the people coming to our rallies and the number of people coming to wherever the vice president has gone, we feel that that will be reflected — first, in the surveys that will be coming out soon, and eventually, in the actual vote that will be there on May 9,” he added.

But would the huge crowds translate into a high voter turnout?

“Definitely. When you talk about numbers in rallies by itself, it’s not going to be a metric for turnout,” Gutierrez said.

“But if you look at how these numbers are reached — if you look at the fact that these are people who voluntarily came there, who spent their own money, who spent their own resources — […] that’s a level of investment … into a campaign that I think is unprecedented in any of the political campaigns that I have seen. And that will certainly be reflected in the outcome of the May 9 elections,” he said.

Big crowds have become a staple of  Robredo rallies.

In her proclamation rally in her hometown Naga City, Camarines Sur, around 20,000 individuals were said to be present. This was quickly eclipsed by the rally in Iloilo which drew over 40,000 attendees, Cavite with 47,000, Bulacan with 45,000, and Bacolod with over 86,000.

As of now, the largest crowd was recorded in Pasig City, where over 100,000 filled Emerald Avenue in the heart of Ortigas’ business district.

Still, despite the rallies, Robredo remains a far second to former Sen. Ferdinand Marcos Jr. in the surveys.

According to Pulse Asia, if elections had been held from Feb. 18 to 23, Marcos would have been the runaway winner with 60 percent of the votes while Robredo only had 15 percent.

Gutierrez stressed, however, that the said survey had not yet captured the massive ground support that Robredo got.

Leni Robredo: We take survey results seriously but are not worried about it