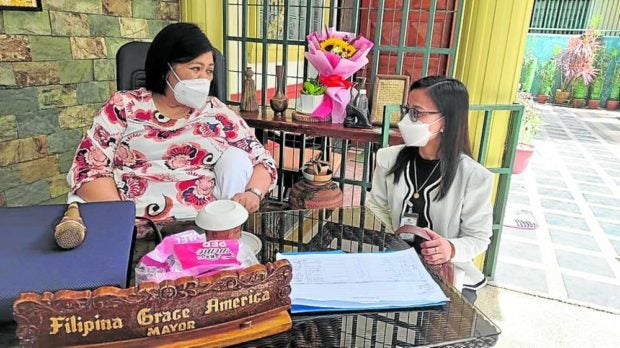 HOME OFFICE | Mayor Filipina Grace America of Infanta, Quezon, on March 30 entertains visitors in her home, which she has turned into a temporary office, while still recuperating from the Feb. 27 gun attack that wounded her four times. (Photo from her Facebook page)

LUCENA CITY, Quezon, Philippines — At least six suspects, including a candidate for mayor, were charged by the police with attempted murder in connection with the failed assassination of Mayor Filipina Grace America of Infanta town in Quezon province in February.

While Quezon authorities were trying to solve the attack, police in Pangasinan province were also investigating another case involving the ambush that wounded a candidate for councilor in Malasiqui town on Sunday evening.

In Infanta, America said the filing of the complaints against the six suspects had validated her belief that the assassination attempt was related to politics.

“It is politically motivated. More than anyone else, I know myself better,” America told the Inquirer in a phone interview on Sunday.

Police in Calabarzon (Cavite, Laguna, Batangas Rizal and Quezon) said on April 2 that the complaints for frustrated murder and attempted murder were filed on April 1 before the Office of the Provincial Prosecutor district office in Infanta against suspects Eriberto Escueta, LA Ruanto, Gilbert Pacio, Joraffin Plantilla, Bobby Vargaz and Ronil Nolledo.

Escueta, of Nationalist People’s Coalition, is one of America’s two rivals for the mayoralty post. Ruanto, who is being referred to as reelectionist Infanta Vice Mayor Lord Arnel Ruanto (Liberal Party), is Escueta’s running mate. America is seeking reelection under Nacionalista Party.

Escueta did not respond to text messages and phone calls when the Inquirer tried to reach him for comments on Monday.

Ruanto, on the other hand, said he had yet to receive a copy of the complaint but denied the allegations against him.

“My life is an open book and I’ve never been involved in any trouble or violent act since I was young,” Ruanto said in a statement posted on social media on Sunday, adding he would fight for the truth.

The Infanta police said it had secured sworn statements from three witnesses, which led to the identification of the suspects.

“The statements corroborated the pieces of evidence earlier gathered by the SITG (Special Investigation Task Group) America, directly pointing to the identity of the suspects in the shooting of the Infanta mayor,” police said.

The police also presented to the prosecutor’s office the ballistic examination results and security camera footage as added evidence.

Of the six suspects, Plantilla has a pending warrant of arrest for another criminal case, said Police Col. Joel Villanueva, Quezon police chief, in a phone interview on Monday.

When asked if she believed that Escueta and Ruanto were behind the slay try, America replied, “Yes, I believe.”

“The fact that I filed and signed the complaints, I fully support the police report because it was the result of their investigation,” America said.

She disclosed that one of the witnesses is “very close” to one of the six suspects, whom she did not identify.

America stressed that before the complaint was lodged, she had not issued any statement against Escueta and Ruanto. She also pointed out that the complaints were based solely on the testimonies of the witnesses and the police investigation.

She added she has yet to meet with and talk to the witnesses, noting that if the suspects would refute the complaints against them, “they should face the witnesses.”

“I’m not in any way a party why they (witnesses) issued their statements,” America said.

Police Brig. General Antonio Yarra, Calabarzon police chief, said they would “see to it that these suspects are put in jail and pay for their crime.”

America was shot four times by an unidentified gunman on Feb. 27 in Barangay Poblacion 1 of her town after attending a church service. She was on board her sport utility vehicle with her assistant, Vergie Borreo, and her cousin and driver, Alvin America, when attacked. The gunman fled on foot, leaving the driver and Borreo unhurt.

—WITH A REPORT FROM YOLANDA SOTELO