Bangsamoro chief to Muslims: Set aside politics during Ramadan 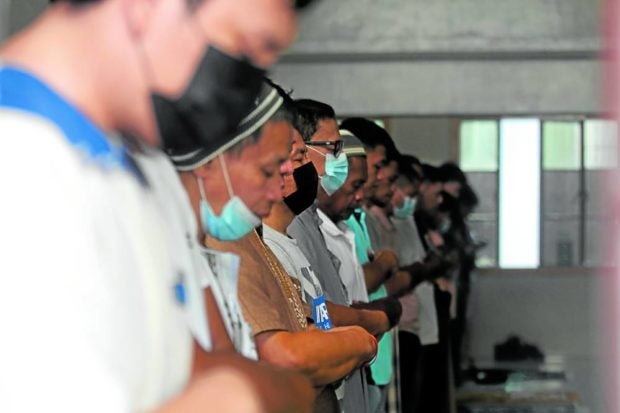 FIRST DAY | Filipino Muslims pray inside a mosque in Cotabato City on April 3, as they start observing the first full day of Ramadan. Ramadan will end after a month when Muslims will celebrate Eid al-Fitr, an Arabic term which means “festival of breaking the fast.” (Photo by JEOFFREY MAITEM / Inquirer Mindanao)

COTABATO CITY, Maguindanao, Philippines — King Umal, 37, walks with his son Jameel, 7, toward the cleaning area to wash his feet before entering the mosque here on Sunday for the first full day of their monthlong Ramadan.

Umal, who lives not far from the mosque, said he expected this year’s Ramadan to be festive as the government already eased the restriction for COVID-19.“This Ramadan we pray that Allah will strengthen my family and guide us, especially our children,” he told the Inquirer.

Across Mindanao, more than 13 million Filipino Muslims, started the observance of Ramadan with a 14-hour fast.

During Ramadan, Muslims eat two important meals, said Anwar Emblawa, a government employee. The first meal, called “suhoor,” is a predawn meal before “fajr” (morning prayers). Islam believers wake up before 3 a.m. to prepare food, such as rice and bread, and some protein, such as fish. They break the day’s 14-hour fast with iftar, the meal after sunset.

Ramadan fasting is one of the five pillars of Islam commemorating the first revelation of the Quran to Prophet Muhammad.

During the entire fasting month, Muslims refrain during daylight hours from eating and drinking, smoking and sex, and will aim for general restraint in thought, word and deed. Exempted from the fasts are children, the elderly, the sick, women who are pregnant, nursing or menstruating, and people who are traveling.

Bangsamoro Interim Chief and Moro Islamic Liberation Front chair Ahod “Al Haj Murad” Ebrahim greeted his fellow Muslims and urged them to set aside differences in their political views as they observe the holy month of Ramadan.

Earlier, Ebrahim expressed his concern over the prospect of the late dictator’s son leading the country, saying the abuses suffered by Moro communities and individuals at the height of martial law under the father and namesake of presidential aspirant Ferdinand Marcos Jr. were still fresh.

“Let’s strengthen our love for each other. The risk for COVID-19 remains but I believe we can end the problem with pandemic,” he said.

Duterte: May Muslims have ‘deeper connection with Allah’