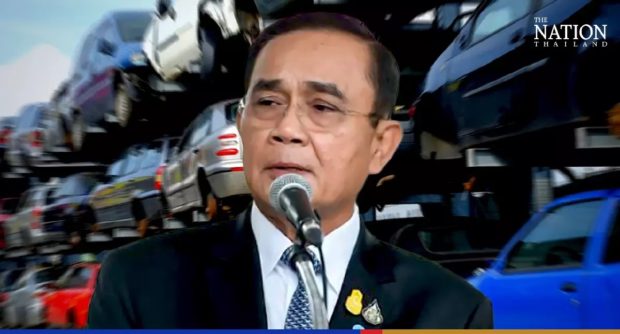 Government spokesman Thanakorn Wangboonkongchana said the prime minister feared that allowing “end-of-life” vehicles (ELVs) to remain on streets would contribute to hazardous PM2.5 pollution in cities. He did not elaborate on how government agencies would remove the aging cars.

Thailand has over 5,033,307 registered vehicles that are over 20 years old, according to data from the Land Transport Department, which registers vehicles.

That figure would grow to 16 million in the next 20 years if no action is taken, the spokesman said.

Prayut said ELVs must be recycled properly so that their parts could be used in industry to help the country reduce steel imports, said Thanakorn. The spokesman added that each vehicle contains up to 69 percent steel.

Under the prime minister’s initiative, the Industry Ministry has signed a memorandum of understanding with the Industrial Estate Authority of Thailand and New Energy and Industrial Technology Development of Japan for a pilot project to recycle ELVs.

The “ELV Project: End-of-Life Vehicles in Thailand” would be a model for recycling ageing vehicles in Asia.

The PM wants all government agencies concerned to join hands in a nationwide push to recycle ELVs, which would also help reduce scrap waste from old vehicles.

Thai authorities to clamp down on polluters as haze chokes Bangkok

Should cars older than 15 years be scrapped?