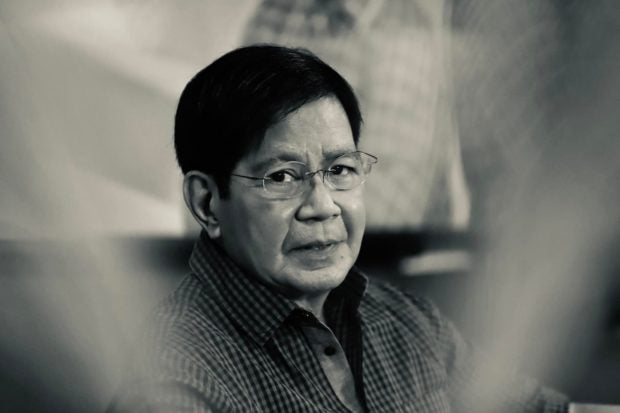 Senator Panfilo “Ping” Lacson in this photo posted on his Facebook page.

MANILA, Philippines — Senator Panfilo Lacson, who is running for president in the May 9 polls, said Monday that he will inhibit himself from a proposed Senate investigation into the estate tax liability of the Marcoses since the issue involves a fellow contender.

(I will have to inhibit because the issue involves a presidential candidate. So this early I will say that I will inhibit from attending whatever hearing will be conducted.)

Asked if there is still enough time to hold the Senate investigation, Sotto said “anytime,” especially since there are 12 senators who are not mounting their own election campaigns.

“Anytime. Lalo na mayroong 12 hindi naman tumatakbo [Especially that there are 12 who are not even running],” he said.

He said the matter could either be taken up by the Senate blue ribbon committee led by Senator Richard Gordon, the finance panel chaired by Senator Sonny Angara, or the ways and means committee, which is headed by Senator Pia Cayetano.

While Congress is still on break, committee hearings may still be conducted.

(The strategy there is if they have a pending resolution or bill related to any tax measures or to any BIR issue they can call for a hearing. Then, go over the resolution as well. It’s just a parliamentary strategy.)

The BIR earlier confirmed sending a written demand to the Marcos family in December 2021 to pay their estate tax liability. This, after the party of presidential candidate Manila Mayor Francisco “Isko Moreno” Domagoso called for the urgent payment of the Marcos estate tax.

Senator Imee Marcos said her family has yet to get a hold of a copy of this letter and is coordinating with the BIR to resolve the matter. She, meanwhile, questioned the timing of the revival of her family’s estate tax issue, blaming it on “rotten” politics.

The camp of Imee’s brother, presidential bet Ferdinand “Bongbong” Marcos Jr., has maintained that the estate tax of the Marcos family remains unsettled since the properties linked to the case are still under litigation.

But the Presidential Commission on Good Government insisted that the BIR “already executed its final assessment” on the involved properties as early as 1993 and that “as early as 1997, the judgment on the tax case had become final and executory.”