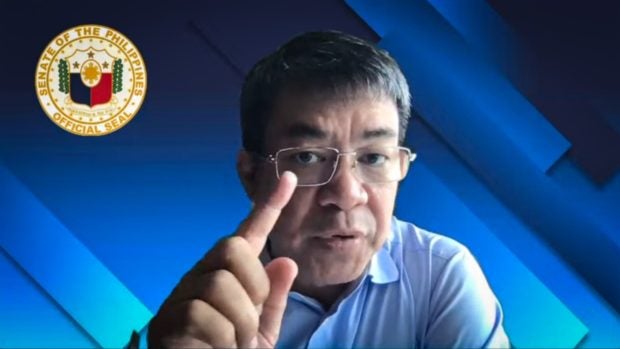 MANILA, Philippines — Senator Aquilino Pimentel III is seeking a Senate probe into the supposed “failure” of the Bureau of Internal Revenue (BIR) to collect the estate tax liability of the Marcos family estimated at P203 billion.

He called for the investigation through Senate Resolution No. 998, which sought to direct the proper Senate committee to conduct an investigation, in aid of legislation, on the “failure of the BIR to collect on the estate tax monies due on the estate of Ferdinand E. Marcos since 1997 and identify the BIR officials, past and present, responsible therefore.”

“[T]here is an urgent and pressing need for the Senate to look into the reasons and BIR Officials, past and present, who are responsible why the government, almost after twenty-five (25) years, has failed to collect on these amounts which have already been adjudged with finality to be due and demandable against the heirs of Ferdinand E. Marcos,” Pimentel said in his resolution filed last March 28, a copy of which was sent to reporters on Sunday.

His resolution pointed out that the Supreme Court, in a 1997 ruling, affirmed a Court of Appeals decision which “held that the deficiency income tax assessments and estate tax assessments were already final and unappealable, and thus, the subsequent summary levy upon the estate and real properties of the late Ferdinand E. Marcos by the government is an available remedy.”

Pimentel stressed that the collection of the Marcoses’ estate tax liability will provide the government a clear funding source for its planned assistance to Filipinos affected by soaring fuel prices.

“According to Finance Secretary Carlos Dominguez III, the basic ayuda of P200 per month given to the poorest of the poor is not enough but that there would be problems of funding if this increased to P500,” the resolution read.

Pimentel further noted in the resolution that the Department of Labor and Employment’s (DOLE) proposed wage subsidy for one million minimum wage earners is worth P24 billion.

“[T]here is no clear funding source for these proposed subsidies and it is immediately obvious that the government would be hard-pressed to source the much needed funds in order to support these social alleviation measures,” his resolution read.

“[T]he payment of the estate tax liability amounting to more or less P203.819 billion on the part of the heirs of Ferdinand E. Marcos in favor of the government, as it has all the right to do so, would be more than enough to fund these proposed subsidies,” it added.

The issue of the Marcos family’s estate tax liability was recently highlighted after the party of presidential candidate Manila Mayor Isko Moreno called for its urgent settlement.

The BIR, for its part, confirmed sending a written demand to the Marcos family in December 2021 to settle their estate tax liability.

Senator Imee Marcos said her family has yet to receive a copy of this letter and is coordinating with the BIR to resolve the matter.

The camp of presidential candidate former Senator Fedinand “Bongbong” Marcos Jr., meanwhile, has maintained that the estate tax of the Marcos family remains unsettled since the properties linked to the case are still under litigation.

The Presidential Commission on Good Government (PCGG), however, said the BIR “already executed its final assessment” on the involved properties as early as 1993 and that “as early as 1997, the judgment on the tax case had become final and executory”