PH diplomat faces up to anti-Asian violence in US 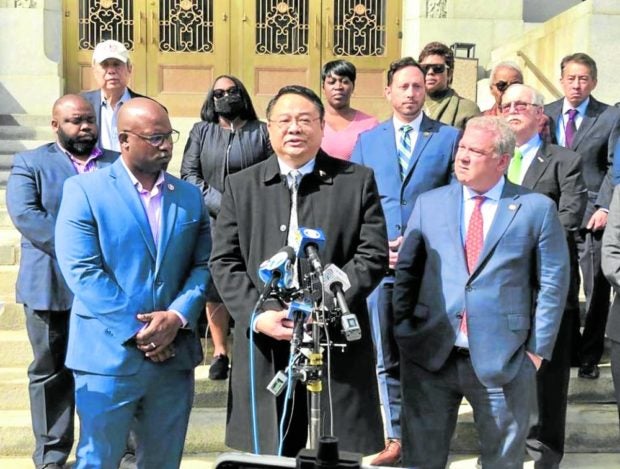 STOP THE ATTACKS | Philippine Consul General Elmer Cato appeals to New York authorities to keep Filipinos and other Asians safe from racist violence in a March 15 speech in Yonkers, four days after a 67-year-old Filipino grandmother was beaten up for no reason. (CONTRIBUTED PHOTO)

NEW YORK — Standing on the steps of historic Yonkers city hall, Consul General Elmer Cato once again made his voice heard in yet another country where Filipinos are still largely invisible and mostly ignored.

This time it is America.

Unusually tall at 1.83 meters for an Asian diplomat, Cato was imposing in a black trench coat on a cold Tuesday morning.

“We don’t feel safe,” Cato said with an ominous tone in his voice as the violence was still fresh.

The racial attack in Yonkers on March 11 battered a 67-year-old Filipino grandmother and shook this city to its core. It is the reason that Cato was opening up about his community’s vulnerability.

Flanked by local officials and other leaders in the Asian community in Yonkers four days later, Cato didn’t want his righteous anger and indignation to be ignored.

“We hope that authorities exert more efforts to remove violent and dangerous people off the streets and make everyone—not just us Filipinos but all Asian Americans — feel safe again,” Cato said.

On Thursday night two Filipino women were attacked—one aboard the Staten Island Ferry and another on a train near Times Square.

By Cato’s reckoning, 37 Filipinos have been assaulted in the Big Apple since his appointment as the new Philippine consul general in New York last year.

Not since the trial of former first lady Imelda Marcos on racketeering charges in 1991 by a federal court here have Filipinos been as frequently featured on the nightly TV news, the tabloids, and social media chatter.

The video of the frail grandmother being punched 125 times, and kicked and spat on by a black man almost twice her size has been viewed more than 2 million times.

Cato pointed to Tammel Esco, the 42-year-old career criminal who is now in jail after attacking the grandmother, and the more than 48,000 homeless people — some with mental illness, roaming the streets of New York — as just part of the problems plaguing this biggest city in America.

Since the death of 58-year-old Filipino nurse Maria Luningning Ambrocio on Oct. 8 last year, Cato has been demanding greater police protection for Filipinos and other people of Asian descent who bear the brunt of these targeted racial attacks.

While Ambrocio was accidentally killed by a fleeing mugger, it is the physical assaults against Filipinos that give Cato sleepless nights.

After five years in the war zones of Iraq and Libya, Cato walked into the crosshairs of America’s culture wars — and a raging pandemic — when he arrived in New York on March 30, 2021.

Cato served 2,000 Filipinos in Libya. Now his task is catering to the various needs of 400,000 Filipinos and Filipino Americans in 10 Eastern states from Vermont to Philadelphia.

In New York state alone, there are 120,000 Filipinos, some 40,000 of them live in Little Manila at the Elmhurst and Woodside districts in Queens.

It was in Woodside where Cato saw up close how immigrants strive and struggle, and where his father, Emer, and mother, Lulu, once lived as undocumented immigrants for almost a decade.

With this honest admission, Cato wants undocumented Filipinos to trust him and not to fear immigration authorities. He is also asking them to report hate crimes to the consulate.

Not one to be stuck in an office, Cato has been reaching out to his “kababayan,” becoming their voice in this metropolis where Filipinos and their Tagalog are part of the more than 800 Babel of languages that are spoken daily and where almost all the peoples on earth are represented, according to the city’s official website.

After Cato spoke at that event in Yonkers, a 71-year-old Chinese-American activist, William Kaung, took the microphone.

“The first people to settle in North America were Filipinos. They have a long history in this country,” said Kaung, an immigrant from Shanghai married to a Filipino.

Kaung was referring to the so-called Luzones Indios who arrived in October 1587 in what is now Morro Bay, California, an event hailed by President Joe Biden in October 2021 as the start of the Filipinos’ historic impact on America, highlighted by the heroism of Filipino nurses toiling in the front lines at the height of the pandemic.

But even with their number of over 4 million in America, Filipinos are still locked out of the mainstream in terms of political empowerment, with few elected to local, state, and federal positions.

“Unfortunately, we grew up with this mistaken notion that since we were a colony, since we fought and died together, and since we were hosting US bases, we mattered to America,” Cato said in a recent online chat with Filipino veterans.

The racial attacks became an opportunity for Cato and other community leaders to raise the profile of Filipinos and other Asians in this city of eight million.

In his first year here, Cato has spoken with New York’s political gentry like Sen. Charles Schumer, the Rev. Al Sharpton, Police Commissioner Dermot Shea, and Maria Torres-Springer, the Yale- and Harvard-educated deputy mayor of New York. Springer was born in Los Angeles, her mother is from Bulacan and her father is from Betis, Pampanga.

“If there is one person who can best represent the Filipino community and our shared struggles with other Asians, Elmer is that person,” said Rhony Laigo, a former Manila-based journalist who now lives in Los Angeles.

“He is always busy and always on the run,” said Marianne Olfindo, Cato’s secretary at the consulate.

As a former journalist, Cato always wanted to be where the action is and to maximize the use of his social media platforms to inform Filipinos everywhere about the activities of their diplomats overseas.

In 2015, Cato came out of the Babylon Warwick Hotel in Baghdad unscathed after Islamic State militants detonated a car bomb while he was billeted there. Foreign Secretary Teodoro Locsin Jr. called Cato his “lion of Libya” when Locsin greeted Cato on his 55th birthday on Dec. 22, 2021.

Like Omar Mukhtar—the real lion of Libya who was martyred for fighting Italian dictator Benito Mussolini and the fascists in the 1930s—Cato risked his life in Libya, but unlike Mukhtar he survived, completing his service as ambassador from 2019 to 2020.

He is credited for repatriating hundreds of distressed Filipinos at the height of Libya’s civil war.

“Elmer possesses that best of leadership traits: he is a good listener. He kept our fellow Filipinos out of harm’s way in Libya,” said Mario Chan, a retired general who served in Libya with Cato. Chan was appointed ambassador to Brazil on Feb. 10.

As a diplomat, Cato has now served four Philippine presidents, from Joseph Estrada to Rodrigo Duterte.

But it was his encounter in 2002 with Blas Ople — then foreign secretary under then-President Gloria Macapagal-Arroyo — that changed Cato’s life.

Known for grooming bright young Filipinos — mostly former journalists like him — to serve the country, Ople suggested that Cato start his diplomatic career in the United Nations in New York.

In 2003, Cato completed his transition from journalist to diplomat serving overseas when he became a member of the Philippine permanent mission to the United Nations.

Cato’s strength as a diplomat is his transparency. His life is an open book: from his addiction to chocolates despite his diabetes, to his child-like joy whenever he receives Voltes V, Mazinger Z, and his other favorite Japanese action figures.

His career is a running piece of reportage, like a war correspondent’s daily dispatches.

“My memoir in case something happens to me,” Cato said.

It is this perceived strength in transparency and openness that is hailed by most of his supporters but mocked by a few detractors.

“There will always be those who will find fault in people for reasons only known to them,” Cato said of his critics.

“Criticism comes with the job description. We respond to critics by doing better,” he said. “I also pray for them and even wish them well.”

A journalist for 17 years and a member of the foreign service for the last 23, Cato’s career is still unfolding here in New York.

“It’s been a year since I came here, and I was welcomed by Asian hate,” Cato said jokingly to local reporter Nadia Galindo of News12 TV last week.

But it is this problem of racial hate — a poison in any society — and its toxic threat on his kababayan that is keeping Cato on his toes.

Pinoy turns into symbol of resistance to Asian hate in NYC