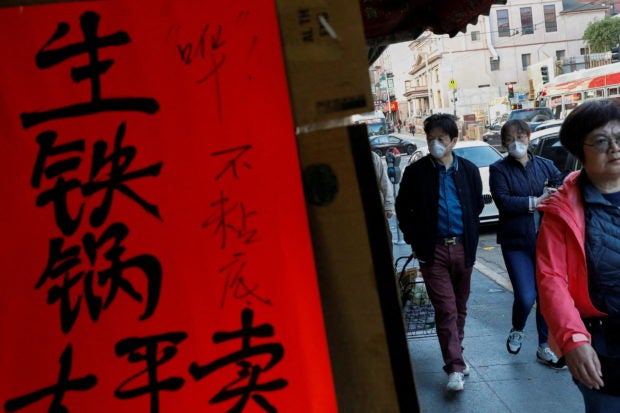 San Francisco city leaders pledged to step up policing in Asian-American communities on Tuesday after statistics showed that 60 hate crimes were committed against Asians in the city during 2021, up from only nine the year before.

San Francisco is the latest major U.S. city to have marked a sharp upswing in hate crimes against Asian Americans in the past year. New York City police said in December that 129 such incidents had been reported in 2021, compared with 28 in 2020.

San Francisco’s police chief, William Scott, told a news conference that he had already ordered increased officer presence and patrols in Chinatown despite staffing shortages he blamed on the COVID-19 pandemic.

“If anybody thinks San Francisco is an easy place to come in and terrorize our Asian communities, you are sadly mistaken. And you will be held accountable. You will be arrested and you will be charged,” Scott said.

Scott and Mayor London Breed sought to reassure residents of the city’s large Asian-American community ahead of the Chinese Lunar New Year, which begins on Feb. 1 and will be celebrated in San Francisco with a parade on Feb. 19.

“This is an extraordinary community and I am heartbroken, I’m frustrated, I’m embarrassed, I’m angry about the violence that has continued to impact many of the people who are part of our Asian community but especially our seniors,” Breed said.

Scott said that more than 30 of the hate crimes had been linked to a single individual who was arrested last August.

The police chief did not name that suspect but appeared to be referring to Derik Barreto, 36, who was charged on Aug. 16 with smashing the windows of more than two dozen Chinese-owned businesses as he rode through the city on a scooter.

San Francisco District Attorney Chesa Boudin faces a recall election in June, targeted by activists who accuse him of being soft on crime.