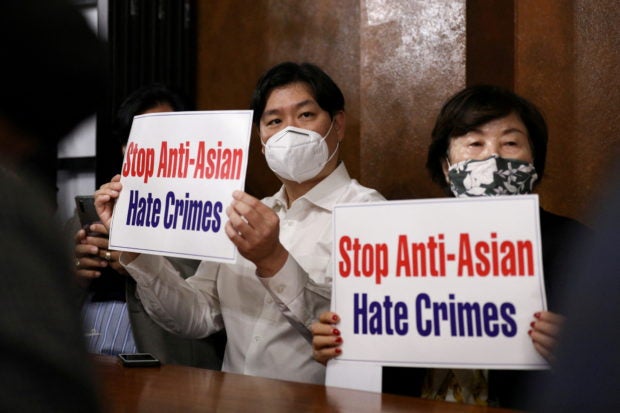 ATLANTA  – Americans protesting anti-Asian violence gathered in Atlanta and other U.S. cities on Wednesday to mark one year since a mass shooting of women of Asian heritage in Atlanta-area spas that awakened the nation to a spike in hate incidents against the community.

Advocates organized events in a dozen cities including Houston, Detroit, and San Francisco, to raise awareness about the growing risk of violence against people of Asian descent, accentuated in recent days by the brutal beating of a woman in New York.

In Atlanta on Wednesday, about 200 people assembled inside a freight depot, some holding signs with the slogans such as “We will not be silent” and “Asians deserve justice.” The event marked the anniversary of the fatal shooting of eight people, including six Asian women, at three spas in the area.

Robert Peterson, the son of Yong Ae Yue, one of the victims, spoke briefly at the gathering. As a son of a Black father and a Korean mother, he said he has long known about the prevalence of racism in America.

“It is important to call this what it is, a crime that is racially motivated,” he said. “My mother was an Asian woman who was targeted because of who she was.”

“As we stand together, let’s send a message: this is unacceptable. This will not be tolerated.”

While police initially said that the gunman, who was white, was driven to violence by his sex addiction, many saw misogyny and racial bias as likely triggers behind the massacre, which came as anti-Asian hate crimes were rising across the United States. Experts have said the COVID-19 pandemic, which originated in China, was prompting people to lash out against Asian-Americans.

The scapegoating of Chinese people for the pandemic, especially by former President Donald Trump, is partly to blame for the rise in violence, said Sung Yeon Choimorrow, executive director of the National Asian Pacific American Women’s Forum, a nonprofit advocacy group.

While Asian Americans were targets of racial violence well before the pandemic, now they are more willing to speak up about their experiences, with the Atlanta shootings serving as a catalyst for people to listen, she said in an interview.

“Nothing had galvanized the country like the Atlanta spa shootings did,” she said. “It opened this space up for us to step in and be able to explain why this happened.”

President Joe Biden said in a statement on Wednesday the shootings had forced Americans to “reckon with our nation’s long legacy of anti-Asian sentiment and gender-based violence” as he highlighted the COVID-⁠19 Hate Crimes Act enacted last year, a bill aimed at combating violence against Asian Americans.

At the Atlanta event, Stacey Abrams, a Black woman who is a Democratic candidate for governor of Georgia, drew parallels between the discrimination historically faced by Asian Americans and Black people, whose rights were restricted under Jim Crow laws that persisted into the 1960s.

“My father grew up in the Jim Crow South. What happened here was an echo of that,” Abrams told the crowd in Atlanta. “We are all here because we must remember. We must tell Asian stories because those are the stories of America.”

A total of 10,905 hate incidents targeting Asian Americans and Pacific Islanders were reported between March 19, 2020, and Dec. 31, 2021, according to research released this month by the nonprofit group Stop AAPI Hate. The majority of incidents concerned women and 16% involved physical assault, the group found.

A separate report by the Center for the Study of Hate and Extremism at California State University, San Bernardino, showed that hate crimes against Asian Americans and Pacific Islanders rose 164% in the first quarter of 2021 compared with the same period in 2020.

The threat was highlighted by an unprovoked assault in Yonkers, New York, where police said a woman of Asian descent was punched more than 125 times last week and stomped on by a man who called her an anti-Asian slur. It was one of a series of high-profile attacks on Asians in New York and elsewhere in recent months.

Also on Wednesday, a 25-year-old New York man was indicted in the murder of a young woman of Korean descent in her Chinatown apartment. The defendant followed the woman into her building and stabbed her dozens of times, police said.