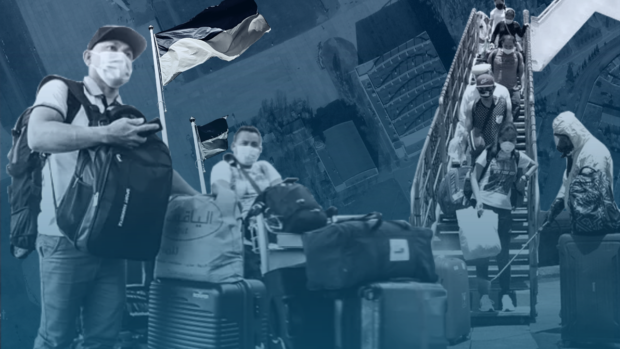 MANILA, Philippines — Less than 40 days before the polls, the tandem of Ferdinand “Bongbong” Marcos Jr. and Inday Sara Duterte-Carpio courted overseas Filipino workers (OFWs) and promised more jobs in the country so they no longer have to leave their families to work abroad.

During their hybrid OFW Miting de AvanceFriday, Marcos Jr. looked back at former president Ferdinand Marcos Sr.’s labor-exporting policy, saying the government at that time found an “opportunity” for workers in the Philippines to work abroad.

Through the years, however, many OFWs have suffered from harassment, violence, and abuse. Philippine Overseas Labor Offices abroad reported that in 2020 alone, 4,302 cases of abuse of OFWs were recorded, according to Senate labor committee chairman Senator Joel Villanueva.

Marcos Jr. said the next administration should implement the creation of the Department of Migrant Workers, which President Rodrigo Duterte already approved in December 2021.

The Department of Migrant Workers is established to regulate the recruitment, employment, and deployment of OFWs and launch investigations and file cases concerning illegal recruitment and human trafficking cases involving OFWs, among others.

Marcos Jr. said there should also be a re-training program for returning OFWs who wish to again work abroad. Livelihood programs should also be available for OFWs who have decided to return and stay in the country, he added.

Further, Marcos Jr. said the government should also be able to support and provide assistance to the families left behind by OFWs—through housing and scholarship programs—to acknowledge the contribution of migrant workers to the country.

This could be done by creating more jobs in the country, he said.

Meanwhile, Duterte-Carpio said she will personally push for the creation of more jobs in the country so that OFWs no longer have to leave their families.

The vice-presidential candidate likewise said that she will push for the creation of more one-stop-shop service centers in the country and expanding livelihood programs for OFWs—such as the “Balik Pinas, Balik Hanapbuhay” Program and the  Livelihood Development Assistance Program.

According to Duterte-Carpio, OFWs are the most “selfless” workers.