Pope apologizes to indigenous Canadians for wrongs at residential schools 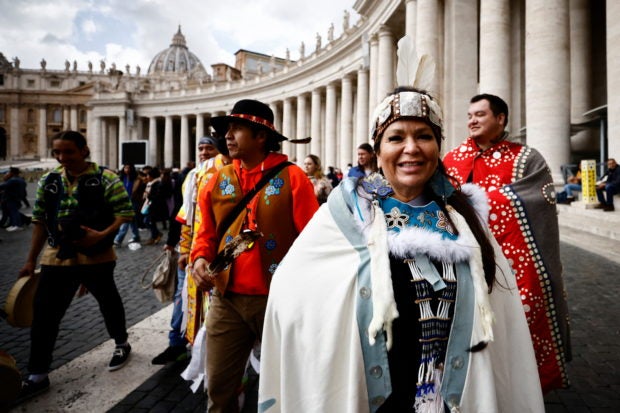 Members of the Assembly of First Nations and Indigenous Tourism Association of Canada’s delegation of Indigenous artists perform in St. Peter’s Square, after an audience with Pope Francis, at the Vatican, April 1, 2022. REUTERS/Yara Nardi

VATICAN CITY — Pope Francis issued a historic apology to Canadian indigenous peoples on Friday for the Roman Catholic Church’s role in residential schools that sought to erase their cultures and where many children suffered abuse and were buried in unmarked graves.

Pope Francis, in an address to native leaders after meetings with delegates from various indigenous nations, also said he hoped to visit Canada in July.

One of the leaders, who want the Pope to make the apology directly to their communities in their native lands in Canada, called his words “historic” and another said they reflected the “entirety” of their message to him.

“For the deplorable behavior of those members of the Catholic Church, I ask forgiveness from God and I would like to tell you from the bottom of my heart that I am very pained,” he said, speaking in Italian.

“I join my brother Canadian bishops in apologizing,” he said. His speech in the Vatican’s frescoed Sala Clementina was preceded by prayers by indigenous leaders in native languages asking the “great spirit” to bless all those present.

“The Pope’s words today were historic to be sure. They were necessary and I appreciate them deeply,” said Cassidy Caron, president of the Métis National Council and the head of one indigenous delegation.

“I now look forward to the pope’s visit to Canada.”

About 150,000 children were taken from their homes. Many were subjected to abuse, rape, and malnutrition in what the Truth and Reconciliation Commission in 2015 called “cultural genocide.”

The stated aim of the schools, which operated between 1831 and 1996, was to assimilate indigenous children. They were run by Christian denominations on behalf of the government, most by the Catholic Church.

“I feel shame – sorrow and shame – for the role that a number of Catholics, particularly those with educational responsibilities, had in all these things that wounded you, in the abuses you suffered, and in the lack of respect shown for your identity, your culture, and even your spiritual values,” Pope Francis said.

Pope Francis, who also spoke of “unresolved traumas that have become intergenerational traumas,” told the indigenous peoples that he was happy to know that Catholics among them were devoted to St. Anne, the mother of Mary. The feast of St. Anne is July 26.

“This year, I would like to be with you on that day,” he said. “I won’t come in the winter!” he joked with them, drawing laughs.

Canadian Prime Minister Justin Trudeau, who also had asked the pope to apologize on Canadian soil, said the country’s history “will forever be stained” by the legacy of the schools and that he was looking forward to the papal visit.

“Today’s apology is a step forward in acknowledging the truth of our past. We cannot separate the legacy of the residential school system from the institutions that created, maintained, and operated it, including the Government of Canada and the Catholic Church,” he said in a statement.

The scandal erupted anew last year with the discovery of the remains of 215 children at the former Indian Residential School in Kamloops in the Western Canadian province of British Columbia, which closed in 1978.

The find brought fresh demands for accountability. Hundreds more unmarked burial sites have been identified since.

Read Next
May 2022 polls candidates told: No loud jingles outside Churches, please
EDITORS' PICK
UK’s Boris Johnson will resign, BBC reports
Unemployment rate up to 6% in May
Geek out at TOYCON 2022 powered by Smart Signature
High inflation: Your P1 is now worth only 87 centavos
High-risk pregnancy: Reducing your risk is in your hands
House energy committee chair Arroyo bats for cheap electricity
MOST READ
Suspect in grisly killing of missing woman in Bulacan arrested
Kim Atienza’s daughter flaunts bikini body in response to critics of her ‘revealing photos’
Japanese artist who created ‘Yu-Gi-Oh!’ found dead in the sea
FDA probes popular Filipino noodle brand for ‘high level of ethylene oxide’
Don't miss out on the latest news and information.