Day of the Landless: The failed promises of land reform in PH MANILA, Philippines—Landlessness, President Rodrigo Duterte once said, was one of the reasons there are Filipinos who are rising against the government: “When everybody is working and earning, I think there will be peace.”

It was in 2018 when he said that if land reform is not implemented and people continued to be deprived of land, the war will not end, saying that as long as there’s land conflict, rebellion will persist.

Duterte’s recognition of a major cause of the insurgency was followed by his Executive Order No. 70, which created the National Task Force to End Local Communist Armed Conflict (NTF-Elcac) calling for a whole-of-government approach to address the “roots” of the more than 50-year war between the government and New People’s Army (NPA).

READ: Duterte: With or without Reds, gov’t to fast-track land reform

Soon after recognizing that land injustice was a main cause of rebellion, Duterte would turn on the rebels.

Duterte called on Filipino farmers to realize they didn’t need NPA to own land, saying the rebels were just “poisoning” the minds of the poor to wage a revolution against the government.

Stressing that “no one is going to win this war,” he said he intended to distribute all government lands through the extended Comprehensive Agrarian Reform Program (CARP). “Let’s not delay it,” he said.

This was the reason that on March 5, as he started his roadshow against the NPA and to present NTF-Elcac “rewards” to barangays that were “cleared from rebels,” he promised to give all “idle” government land to the poor.

He told a crowd in Cagayan de Oro City that he is the President who has given the “most” when it comes to land distribution: “I am the only President who doesn’t like publicity.”

However, as the Day of the Landless was commemorated on Tuesday (March 29), farmers said that Duterte has failed in his promise to finish land reform, saying it was one of the legacies he would leave behind.

While the 4.9 million hectares which the Department of Agrarian Reform (DAR) said had already been distributed to farmers appeared enormous, government data showed that Duterte’s land distribution record was the lowest since 2005. 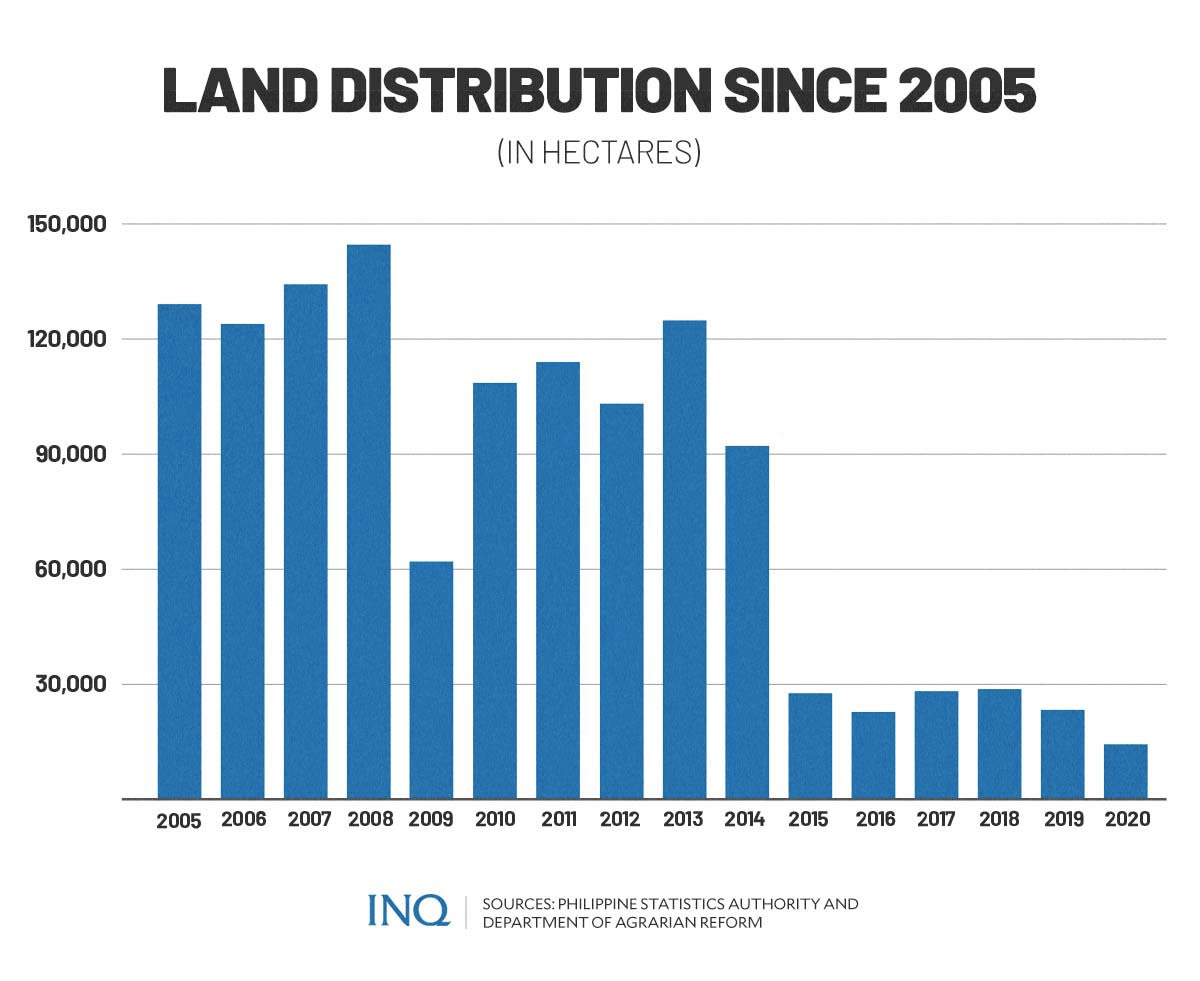 According to the Agricultural Indicators System of the Philippine Statistics Authority (PSA), the total hectarage of land that was distributed by the Duterte administration ranged only from 14,147 to 22,758 hectares every year:

Land for the landless

Initiated by the Asian Peasant Coalition, the Global Day of the Landless, which is commemorated every March 29, “highlights the rural communities’ continuing struggle for land”.

The Amihan National Federation of Peasant Women (Amihan) said the government has failed to address the Philippines’ “lingering” land problems despite the promises made by Duterte himself starting in 2016.

RELATED STORY: Farmers use one word to describe Duterte legacy to them—neglect 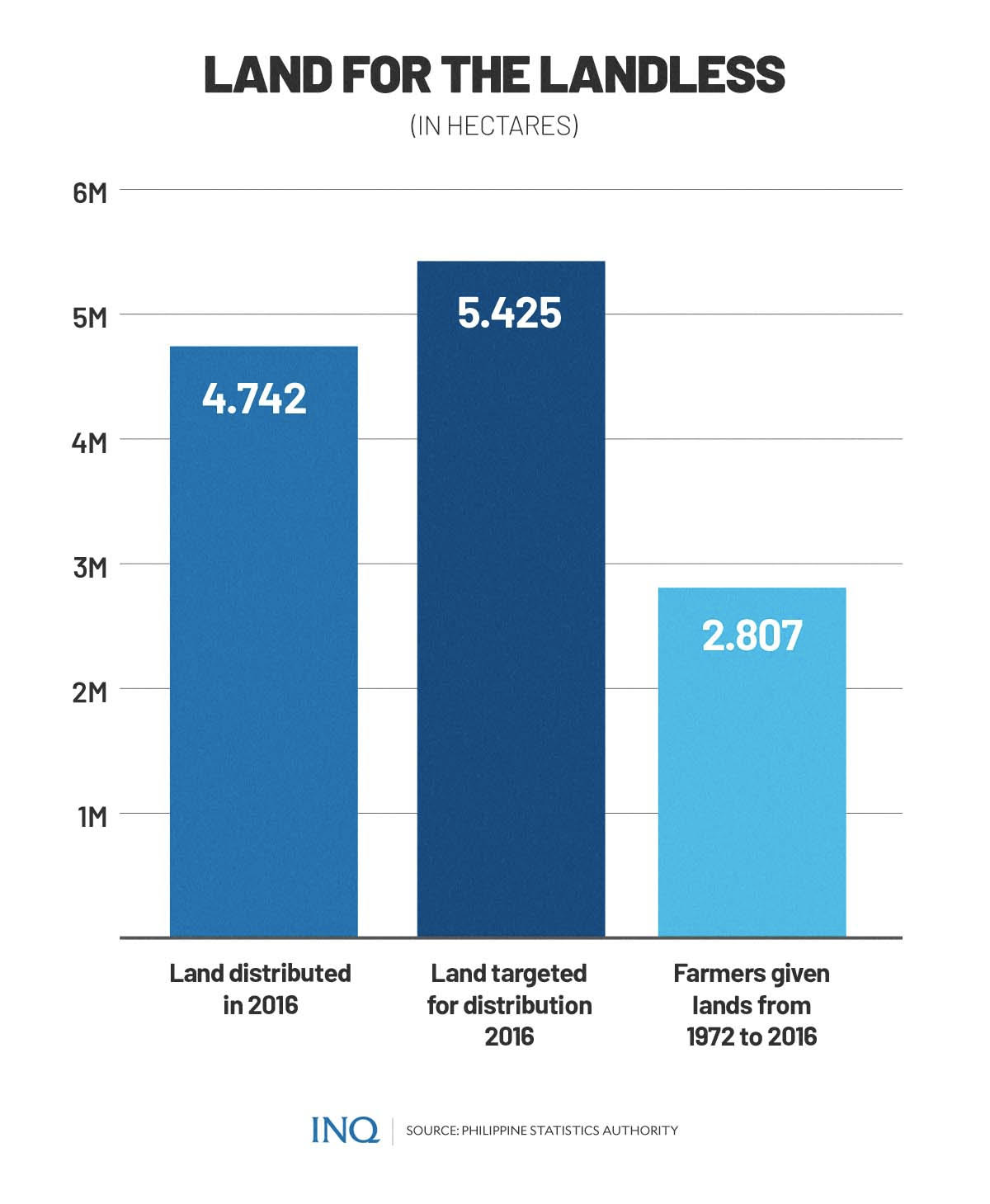 In 2020, the DAR said since CARP was implemented in 1988, the government has given out 4.9 million hectares of land. It said it has already distributed 90 percent of its target. 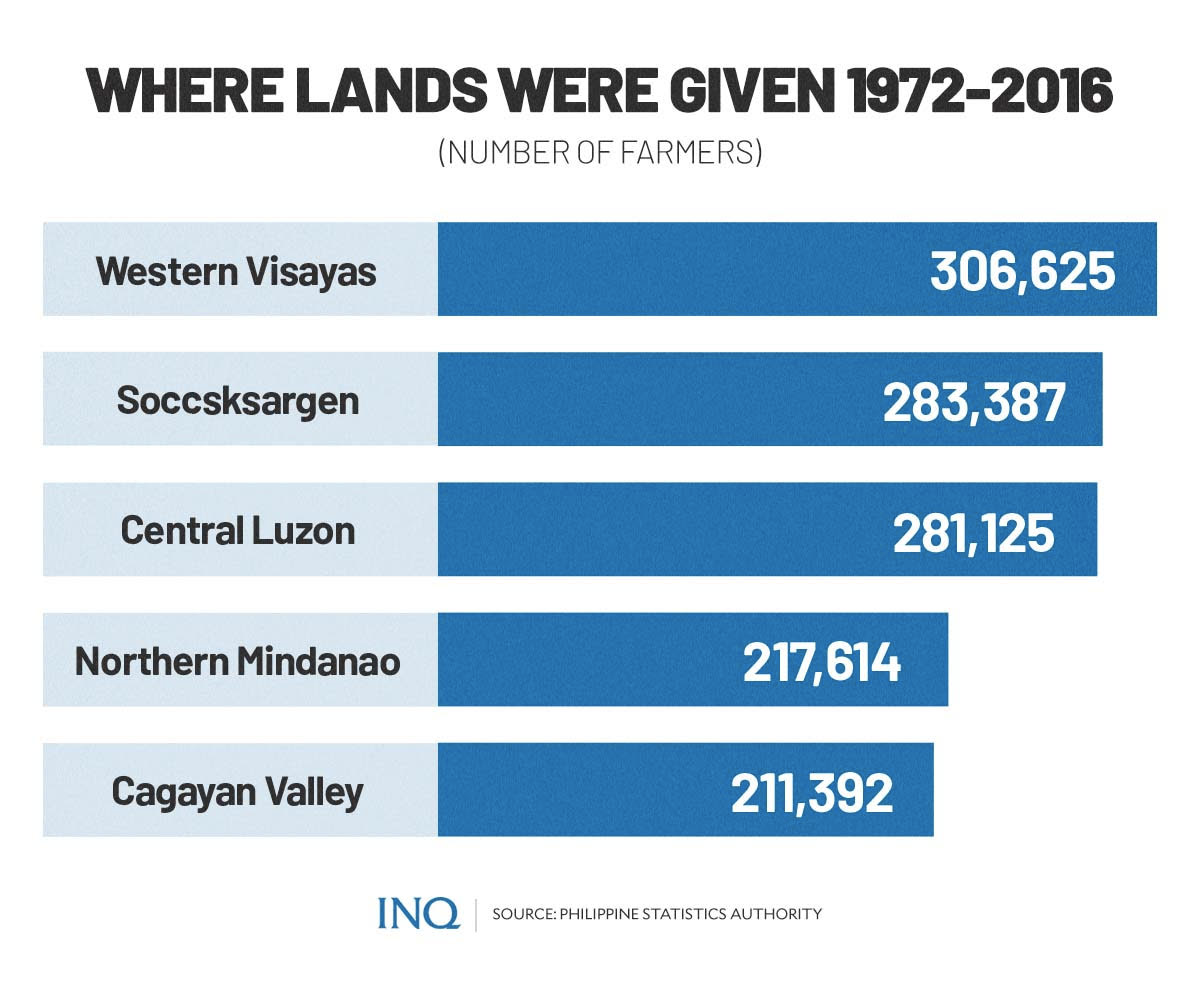 Duterte stressed last year that, as told to him by then Agrarian Reform Secretary John Castriciones, 450,000 hectares of land are set to be distributed: “I hope that you will be able to distribute it before my term ends.”

CARP was the landmark agrarian reform program started by then President Corazon Aquino, whose family owned what was then considered as the biggest symbol of landlordism, Hacienda Luisita.

It was a program created by the Comprehensive Agrarian Reform law, or CARL, which Aquino signed in 1988 to usher in what was then touted as a game-changing campaign to redistribute massive areas of agricultural land which are under control of a few families.

The PSA said in its latest Labor Force Survey that 9.34 million or 21.7 percent of the 43.02 million employed individuals in January 2022 are agricultural workers.

Statista, a consumer data firm, said that in 2020, the total land area in the Philippines that was tilled for the production of agricultural crops was 13.42 million hectares.

However, as the 32nd year of the Comprehensive Agrarian Reform law was commemorated in 2020, the Unyon ng Manggagawa sa Agrikultura said seven out of 10 Filipino farmers are still landless.

INQUIRER.net was able to talk to Rolando Agustin, a landless farmer in Isabela, who described the hardships encountered by farmers like him who cultivate lands that they do not own. 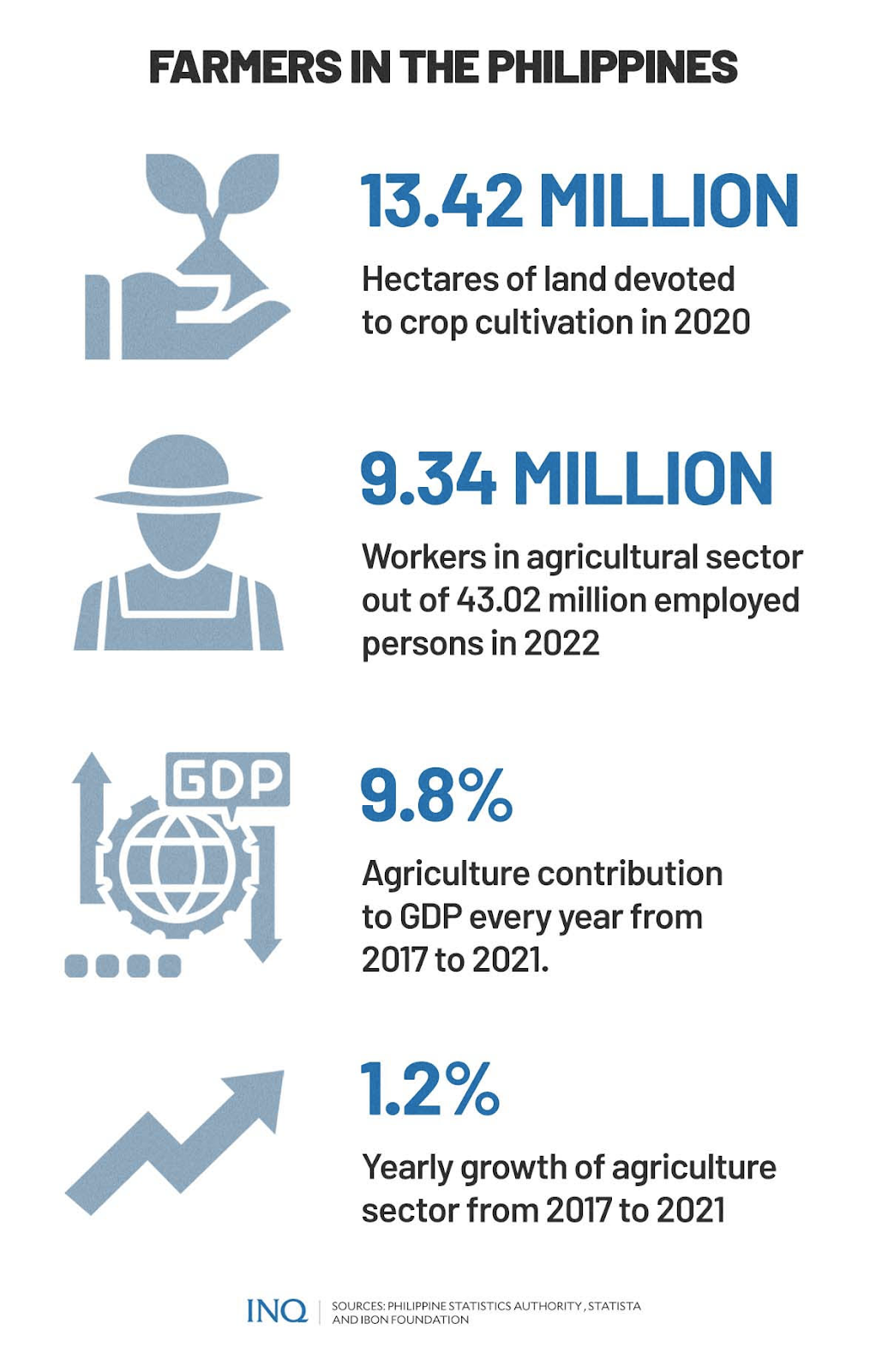 The Southeast Asian Regional Center for Graduate Study and Research in Agriculture (SEARCA) said a “small farmer” has an average farm size of 1.29 hectares.

The Kilusang Magbubukid ng Pilipinas stressed that because of the lack of irrigation and other support services, the 1.29 hectares of land will only yield 52 cavans of crops.

This was the reason that a farmer has to till land more laboriously to produce more than 52 cavans.

However, the study “Impact of Land Ownership on Productivity and Efficiency of Rice Farmers” found that leased rice farms tend to have a lower value of rice production. 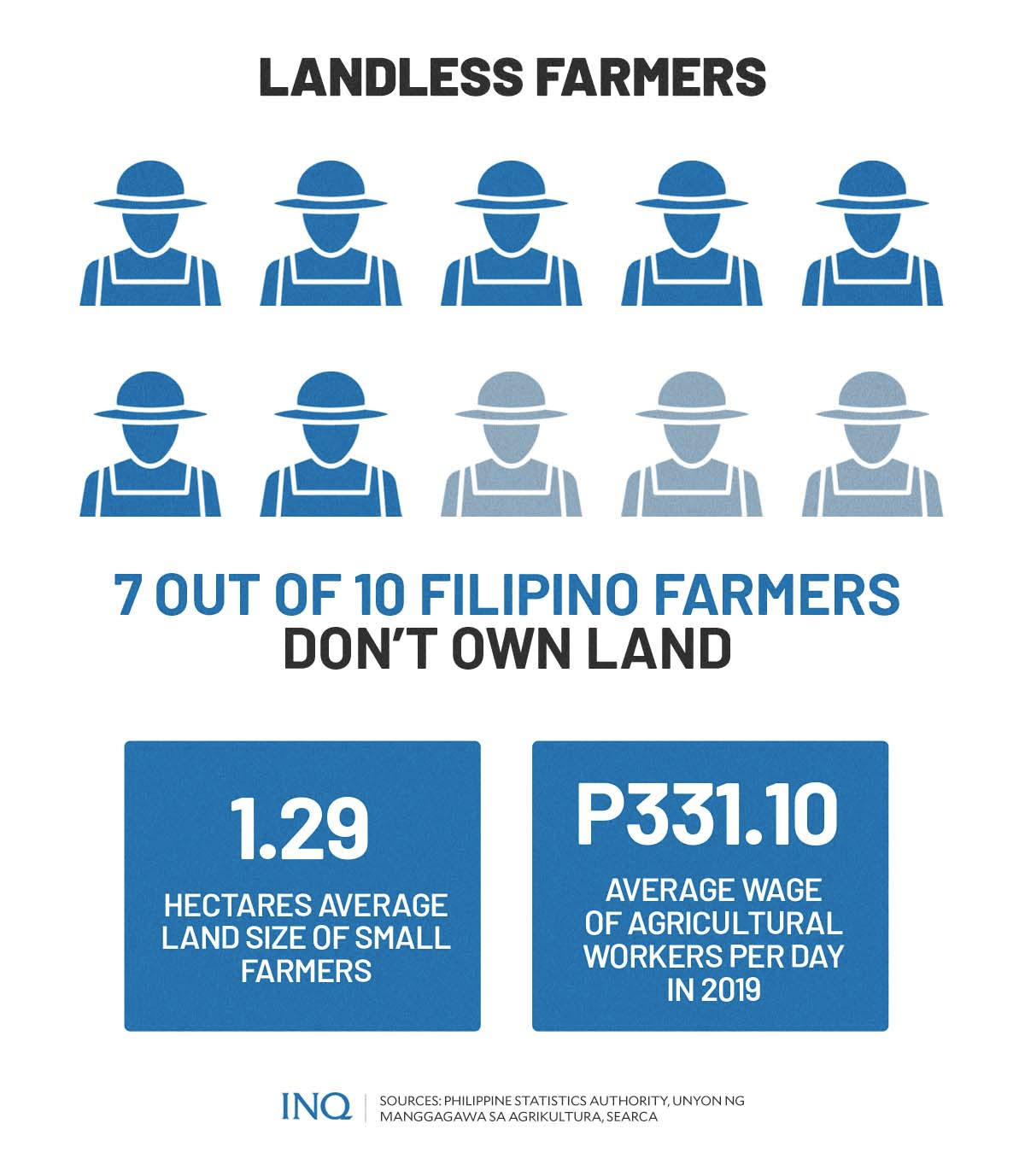 This, Koirala et. al. said, strengthened the findings of Abdulai et. al. who said that farmers who lease land for farming are less likely to invest in land improvement activities.

The study “Land ownership security and farm productivity: Evidence from Thailand” showed that farmers with secure legal ownership will have more incentives and better ability to invest because of a lower perceived risk and favorable access to institutional credit which will lead to higher output.

Landlessness, not the only problem

This year, the commemoration of the Day of the Landless has the theme “Peasants Rise Up vs. Land Grabs and Fascism”.

The group Amihan said “land grabbing and fascism go hand in hand. Many political prisoners are farmers and peasant women who have been jailed due to trumped up charges meant to remove them from disputed land.” 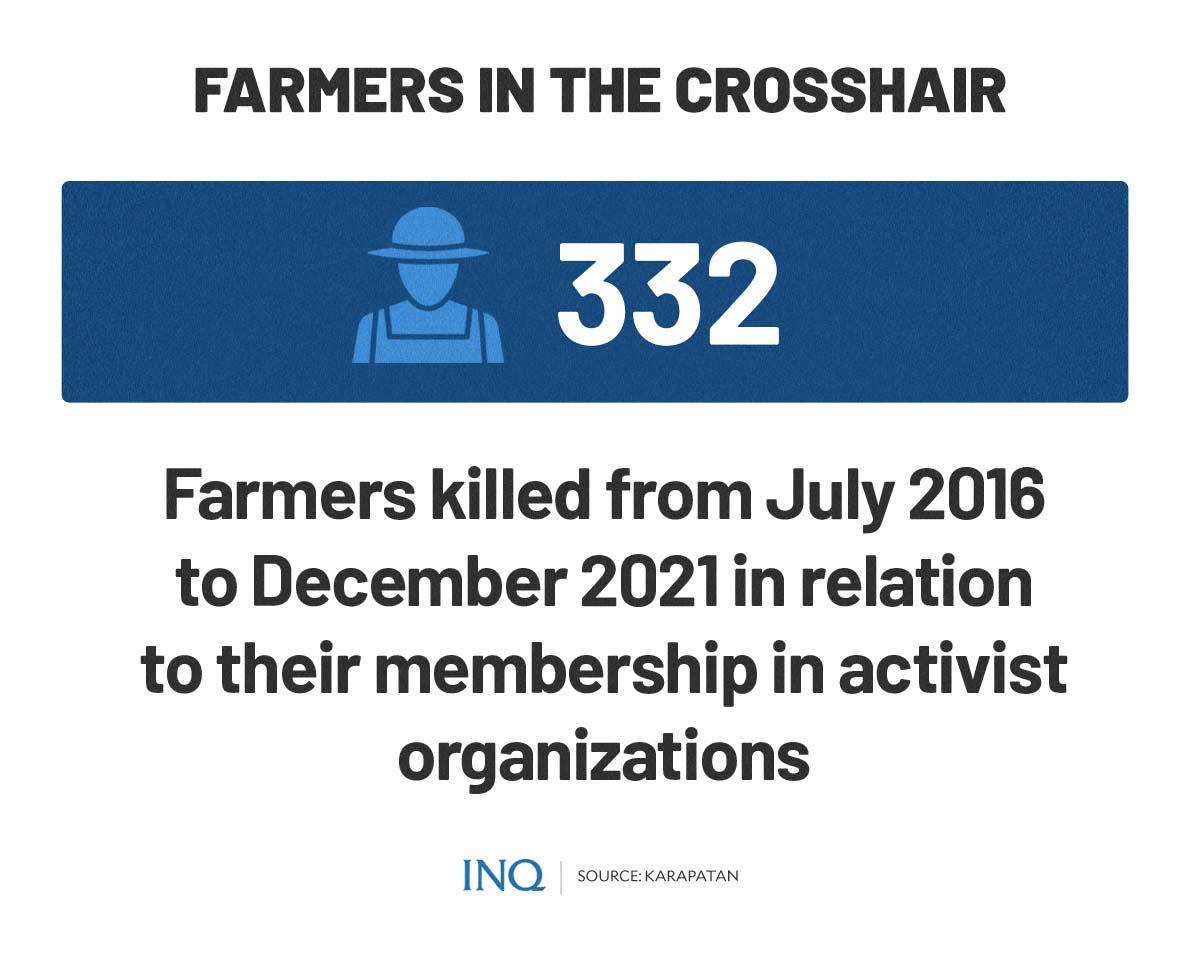 “Farmers and advocates who speak out are harassed, threatened, and killed,” it said. According to data from the human rights group Karapatan, 332 farmers had been killed from July 2016 to December 2021.

The think tank Ibon Foundation likewise said that farmers continue to suffer from government neglect of the agriculture sector, saying that the sector contributes only an average of 9.8 percent of gross domestic product every year (2017 to 2021).

It only registered an average of 1.2 percent yearly growth (2017 to 2021), which is less than one-third of the 3.8 percent historical average since the end of World War II.

Ibon Foundation also stressed that 1.8 million agricultural jobs were lost from July 2016 to January 2022. During the COVID-19 crisis, there was a 2.5 million drop in employment in agriculture.