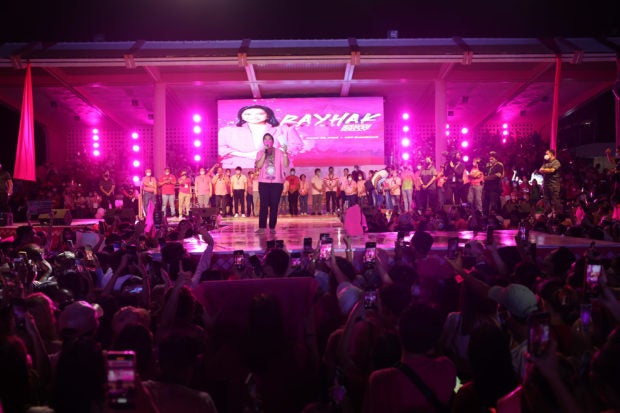 During her two-day barnstorming across Samar Island, where she won in 2016, Robredo was endorsed by 21 out of 24 mayors in Northern Samar and 20 out of 23 mayors in Eastern Samar. They were led by ranking officials like Evardone, Northern Samar Gov. Edwin Ongchuan, and Eastern Samar Rep. Fe Abunda.

Both Evardone and Ongchuan, dressed in pink shirts touting Robredo’s slogans, appeared in almost all her sorties and grand rallies across Samar Island, her first leg without her running mate, Sen. Francis Pangilinan, by her side. Both provinces have yet to endorse a vice presidential bet.

Abunda later joined Robredo’s Borongan grand rally where she exhorted Estahanons to vote for the “most diligent, honest and unblemished” candidate.

On Tuesday, Eastern Samar officials formalized their commitment to help Robredo win through the signing of a covenant and, in exchange, she promised to help lift the province out of poverty.

Evardone said they wanted Robredo to know “what the grievances of our people are and we want to be assured that you will not forget us when you win the presidency.”

She also promised to prioritize the completion of a circumferential road that would connect the villages of Las Navas, Matuguinao and Hipapag.

Progress in Samar has been hampered by weak social programs and government support. It was one of the hardest-hit provinces by Typhoon “Yolanda” in 2013, which killed thousands in Eastern Visayas.

“I will prioritize Samar Island and this is not just a promise made in the wind. I have shown you over the years that even though (the Office of the Vice President) has always had meager funds, we’ve always done our best to help,” Robredo said.

Robredo, Eastern Samar sign mutual pact: Save us from poverty and we will go all out