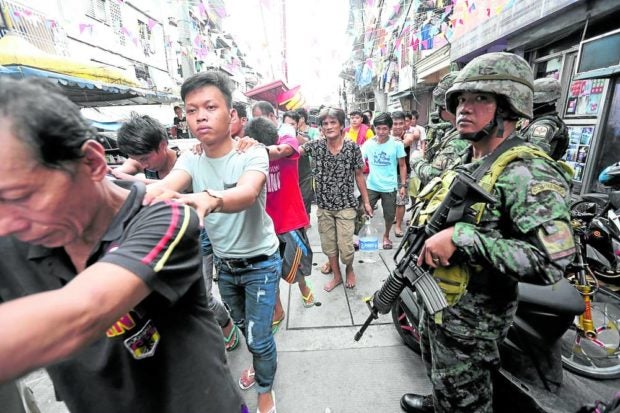 EARLY SALVO | One of the first anti-drug crackdowns under the Duterte administration results in the death of seven suspects and the arrest of around 200 others in San Miguel, Manila, in this Oct. 7, 2016, photo. The president’s bloody war on drugs later earned him complaints in the International Criminal Court. (File photo by MARIANNE BERMUDEZ / Philippine Daily Inquirer)

MANILA, Philippines — The Dangerous Drugs Board (DDB) has assailed the International Narcotics Control Board (INCB) for noting in its latest report the “extrajudicial targeting” of persons suspected of drug-related activities — a violation of international drug control conventions.

In a statement on Tuesday, the DDB said it had been in constant dialogue with the United Nations body and even “expressed openness” to a visit by experts to officially assess the Philippine anti-drug campaign.

The DDB said its “only request” was that the INCB “uphold an impartial stance and refrain from considering sources that have not been vetted or validated by its member-states.”

In its 160-page annual report for 2021 released this month, the INCB called on the Philippine government “to take immediate steps to stop and prevent any further extrajudicial targeting and to accelerate the ongoing investigations.”

Most of the INCB’s observations were attributed to the findings of the UN Human Rights Council and the investigation of the International Criminal Court (ICC).

Before the ICC ended its inquiry last November, its prosecutor estimated that as many as 30,000 were killed from July 2016 to March 2019 alone in the ongoing “war on drugs” of President Rodrigo Duterte’s administration.

Also on Tuesday, the International Coalition of Human Rights in the Philippines (ICHRP) called for Magnitsky sanctions on the President and others in the so-called “Dirty Dozen” of rights violators in the country.

It is the first time any rights group is campaigning to enforce the Magnitsky Law — which authorizes the US government to sanction deemed rights violators, freeze their assets, and ban them from entering the United States — on ranking government officials often at the center of calls for accountability regarding the war on drugs and the counterinsurgency campaign.

The INCB said it “welcomes” the efforts of the Department of Justice to re-examine the drug operations conducted by state forces. The review has revealed law enforcement lapses and resulted in the filing of administrative and criminal charges against erring officers of the Philippine National Police.

On a positive note, the UN body recognized the decline in the overall number of people admitted for drug use in the country in 2020. As claimed by Duterte in 2020, drug users dropped more than 58 percent to 1.67 million in 2019, compared with 4 million in 2016.

But the INCB observed that some senior government officials, which it did not name, continued to advocate action against those suspected of drug trafficking and publicly discourage cooperation with rights groups.

It noted that in the middle of the pandemic from 2020 to 2021, the government continued to authorize police operations against drug use and trafficking suspects, resulting in the deaths of many individuals.

“The Board reiterates in the strongest possible terms its view that extrajudicial responses to drug-related criminality are in clear violation of the international drug control conventions, which require that drug-related crime be addressed through formal criminal justice responses and strict adherence to internationally recognized due process standards,” the INCB said in its report.

The INCB also expressed disapproval of the government’s plan to reimpose the death penalty, particularly on those convicted of crimes under the Comprehensive Dangerous Drugs Act of 2002.

It encouraged member-states including the Philippines not to reintroduce capital punishment for drug-related offenses, and to commute death sentences already handed down.

In response, the DDB said killings and rights violations were not being condoned by the government.

“The DDB reiterates that no policies have been issued that permit, tolerate and condone killings and other human rights violations in relation to the Philippines’ antidrug campaign,” it said.

According to the DDB, the government is employing a “whole of nation” approach vis-à-vis the drug problem by intensifying law enforcement operations to reduce drug supply, and “prioritizing” demand-reduction initiatives “focusing on rehabilitation, reintegration, preventive education and advocacy.”

It told the INCB to stick to certain parameters: “While recommendations of the INCB on the global drug situation are welcomed by governments, in the case of the Philippines, the DDB believes that it would be most beneficial if the organization remains within its mandate of ensuring adequate supply and availability of dangerous drugs with legitimate use, monitoring of measures taken by governments to prevent diversion of substances, and assisting governments to comply with their obligations under international drug control conventions.”

In a press conference, the ICHRP launched a global campaign to impose sanctions on these ranking officials who allegedly masterminded or took part in rights violations:

“The state of terror created by the Duterte regime is at the heart of this sanctions campaign,” said Australian Sen. Janet Rice. “National governments must act to sanction those who commit serious human rights violations to hold the architects of this terror to account.”

According to ICHRP chair Peter Murphy, the Magnitsky campaign is a “direct follow-up” to its three-part inquiry into the Philippine rights situation, in which it identified patterns of gross and systemic human rights violations. These have been submitted to both the ICC and the UN Human Rights Council.

“In the absence so far of genuine accountability for these crimes through international mechanisms, such as the [ICC] and the UN Human Rights Council, ICHRP is launching a global campaign under national Magnitsky Acts to hold those responsible accountable for these widely documented crimes,” Murphy said.

The campaign also seeks to work with the governments of Australia, Canada, the United States, the United Kingdom, and the European Union to hold rights violators accountable.

Duterte says he will never apologize for drug war fatalities